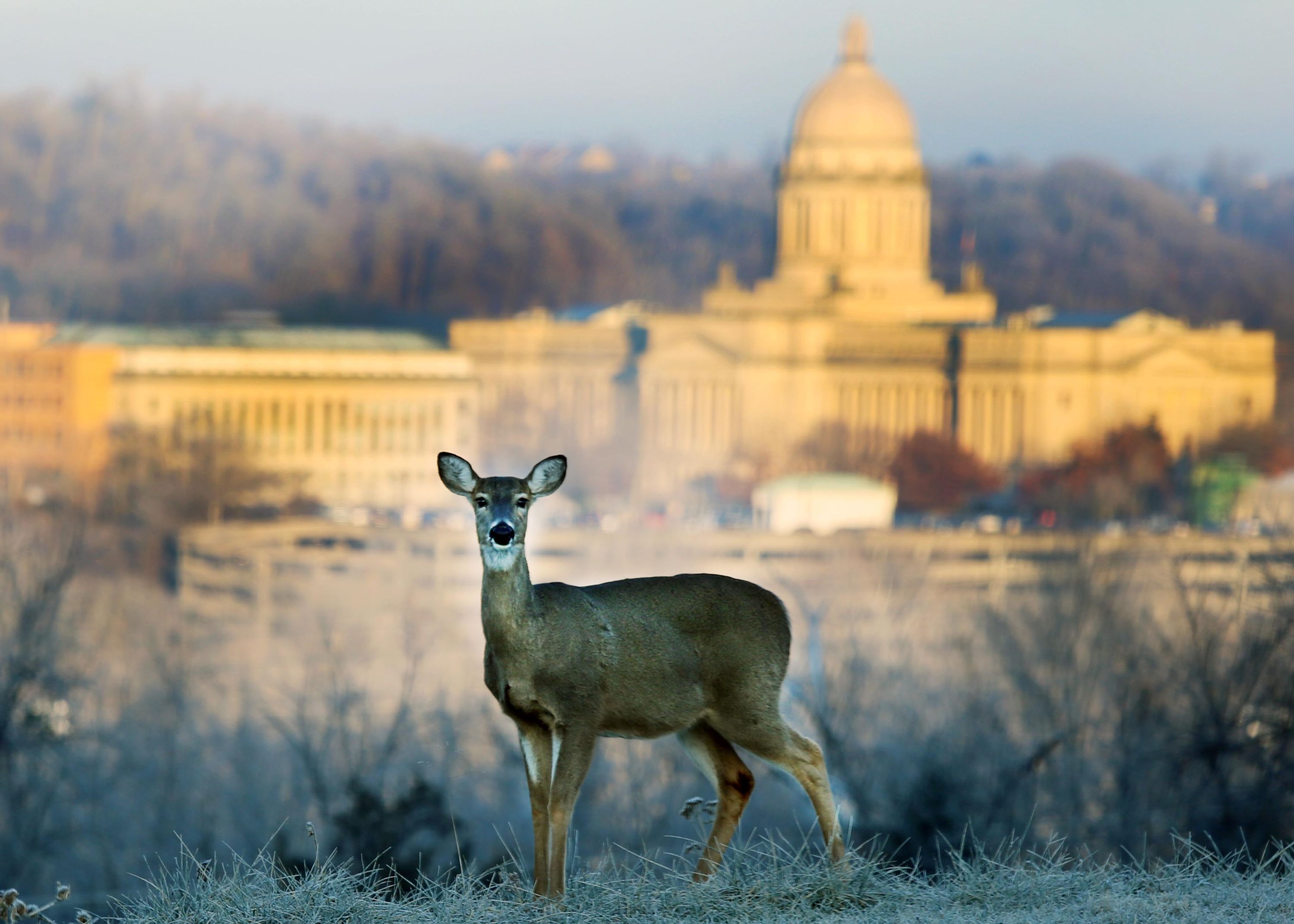 Farmers are no strangers to the damage and danger caused by populations of certain wildlife species to crops and property.

The USDA notes that, “Each year, wildlife cost property owners millions of dollars in damage, underscoring the need for responsible wildlife damage management.”

While total numbers for crop damage are hard to quantify, producers have long felt losses to their budgets due to decreased yields and replanting costs.

David Appelman, the University of Kentucky (UK) College of Agriculture, Food and Environment’s Extension agent in Bracken County said it has been known for some time that certain wildlife populations in that area have gotten too large.

“Crop damage is on the increase and I get many calls from farmers wanting to know what to do about those crops,” he said. “And gardens in many areas of our county are all but impossible to grow unless we build a fence around them.”

With that said, Appelman worked with local Fish and Wildlife officials as well as other leaders in the community to create a two-day doe harvest event to help alleviate some of the problem while drawing attention to the issue.

The Hunter’s Harvest deer donation station was set up at the extension office and served as a base of sorts to bring in the harvested animals. As long as deer are tagged properly, an unlimited number of doe can be taken in Bracken County during the regular deer hunting season.

Another component of establishing the project was to make sure the processed meat would go to help the needy in the county.

“We wanted to do this in a responsible, safe manner and after meeting with Gregg Rentfrow at the U.K. Meats Lab, who was willing to participate and help with this project, I felt confident regarding food safety. All the meat was donated to the local food pantries,” said Appelman.

According to information from UK, Webber Farms and the Kern family provided a refrigerated truck to deliver the meat to the UK Meats Lab, where Rentfrow’s staff ground and packaged the meat. Appelman said over 200 families were helped because of the donation.

As it turned out, the weather did not cooperate on the first day of the event but more than a dozen doe were taken anyway and the project has generated much interest.

“We’ve had tremendous, positive comments from many people including our land owners, the hunters and county officials,” said Appelman. “They were enthused about the efforts and are making bigger and better plans for next year.”

While Bracken County is not known for large grain producers, there are some larger grain farms in the area.

“Those larger farms have combines equipped with monitors and all of those farmers will tell you the outside 10 to 20 rows in many fields with corn, or 30 to 40 feet of soybeans, the reduction is half or more in yield as compared to the center of the field,” said Appelman. “When you consider the outside perimeter of the field that gets to be a lot of acres.”

And that equates into a lot of money. Appelman said farmers are good stewards and don’t mind to share a little with the wildlife populations but when it gets deep into a producer’s pocket it gets to be more than they can financially bear.

Losses due to wildlife are not new to farmers and issues surrounding these losses are not new to KFB. Two years ago, the Federation led an effort to allow farmers in Kentucky to obtain depredation permits to take black buzzards which were wreaking havoc on many livestock farms.

It is estimated that in 2014, Kentucky livestock producers lost nearly 200 calves and cows to black vultures attacks, a number that was nearly triple from the previous year.

The program is administered by KFB Federation which is the only non-government entity that has been approved by U.S. Fish & Wildlife Services (USFWS) for a black vulture depredation permit and has been viewed as a possible national model.

As with any project like the one in Bracken County, it takes multiple agencies to make it work. Appelman said local Fish and Wildlife Game Warden James Becket has been very supportive of reducing the deer herd and was very helpful in pushing this initiative.

While the deer population may be getting the attention now, Appelman said there are plenty of problems with the turkey population, as well. In fact, one-third of a UK silage trial conducted earlier last year in Bracken County was destroyed by this exploding turkey population.

“We appreciate the wildlife but we’ve got to keep them in balance and we applaud the hunters and those that assisted with this project,” he said.

The policy process is a key component in understanding KFB as an organization and what issues are important to members. Each year, policy resolutions are channeled from county Farm Bureaus to the state office and reviewed by advisory committees and a Resolutions Committee comprised of members from the 11 districts that make up KFB across Kentucky.

Eddie Melton, KFB First Vice-President and chair of the Resolutions Committee said there were more resolutions related to wildlife populations that came from county Farm Bureaus in 2016 than any other issue.

“Obviously over-populations of certain wildlife species is a concern to our members whether they’re on the farm or not and that was evident in the number of resolutions that were sent relating to this subject,” he said. “In becoming a policy issue for 2017, KFB will advocate for sensible solutions to this problem in the coming year.”

KFB President Mark Haney discussed the wildlife population issue during the 2016 KFB Ag Tour throughout Northern Kentucky and during his address to KFB members at the organization’s annual meeting last December. He said it is an issue to be taken on in 2017.

“Not only do farmers have to deal with lost revenue due to wildlife damage sustained in their crops, but nearly all of us have seen a variety of wildlife on the highways, especially deer,” he said. “As these populations grow beyond what is considered normal, the hazards they present to those in agriculture, those behind the wheel of a car or truck, and even to themselves, grows and it is an issue we must face in order to do what is best for everyone, as well as for the wildlife.”

Haney added that it is the work of local Farm Bureaus that has helped shed light on this issue and it will be through their advocacy efforts that solutions will be found.