“In just its second year, this event was very competitive with more medals and more double golds awarded than last year,” Agriculture Commissioner James Comer said. “We established the competition as a rigorous test for Kentucky’s wineries, and they rose to the challenge.” 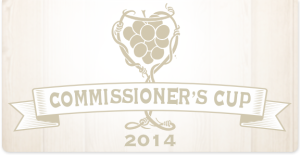 To claim the Commissioner’s Cup, a wine must earn at least a gold medal in Commercial competition and must be produced from at least 75 percent Kentucky fruit, said Tyler Madison, the Kentucky Department of Agriculture’s Grape & Wine Marketing Program manager.

Two wines from Old 502 Winery earned double gold medals, making Old 502 the first winery in the brief history of the event to win more than one in the same competition. A wine from Baker-Bird Winery also took double-gold-medal honors. The double golds signify that each judge independently awarded gold-medal status to the wine. The three double-gold winners were:

Madison said the annual showcase is becoming a reliable guide “for those looking to locate the best wines Kentucky has to offer each year” from the more than 70 Kentucky wineries.

For the complete list of medalists, along with information about eligibility standards and the judging procedure, visit http://competition.kentuckywine.com/.

Press release courtesy of the Kentucky Department of Agriculture.