Lexington, Ky., (Aug. 4, 2015) –Researchers in the University of Kentucky College of Agriculture, Food and Environment are looking for ways for home lawns to give Mother Nature a helping hand. 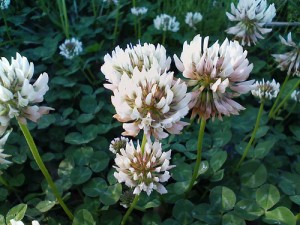 Gregg Munshaw, UK turf extension specialist, and Dan Potter, UK entomology professor, are studying the benefits of white clover as a habitat for pollinators and as a way to reduce nitrogen fertilizer applications.

In the project about increasing pollinator habitats, they are looking at three different smaller varieties of white clover to see which attracts the most pollinators. Their research plots consist of only white clover, only turf and a mixture of turf and clover.

“Our goal is to eventually attract pollinators to the entire yard, rather than just to flower beds,” Munshaw said. “We think these clovers will be more popular with people who want to help improve bee habitat while maintaining an aesthetically pleasing yard.”

Recent studies from Potter’s lab have found that white clover in lawns is an important urban habitat for pollinators.

“Dozens of bee species, including several rare and declining bumble bee species, were documented visiting naturally occurring white clover in low-input yards in Central Kentucky,” Potter said. “Even a small patch of clover in a backyard helps sustain beneficial urban bees that are responsible for pollinating our ornamental plants and home and community gardens.”

The researchers will survey the test plots for bees and compare their findings of bee populations and species diversity with those found on the more commonly occurring larger white clover yards and the pollinators that visit only grass plots. They will also sample the soil of the small white clover test plots for common lawn pests, such as white grubs. If the smaller varieties of white clover prove to be more resistant to the insects than other lawns, it could help reduce the needs for lawn pesticides.

In a recent separate study, Munshaw looked at the influences planting date and planting method had on establishing the traditional-sized and the smaller white clover into typical cool-season lawns comprised of Kentucky bluegrass and tall fescue. By adding white clover, a nitrogen-fixing legume, to established cool-season lawns, it would help reduce the amount of nitrogen fertilizer the lawn needs without doing an entire turf renovation. Nitrogen fertilizer is a contributor of nonpoint source pollution of groundwater and natural water bodies.

He found that homeowners could successfully establish both clover varieties in a mature stand of cool-season grass during the spring and summer with commonly available equipment. However, the best white clover establishment occurred in cool-season lawns that were scalped or closely mowed before sowing the clover. This treatment was the only one that would result in a high enough population of white clover to reduce the need for home lawn nitrogen applications.