Posted on Jan 31, 2013
WASHINGTON, D.C., January 31, 2013 – The United States and Japan officially sealed an agreement this week that will allow exports of U.S. beef from cattle less than 30 months of age to enter that Asian market starting Feb. 1. The agreement was a long time in the making and its positive influence on U.S. beef markets could mean more than an immediate increase in trade volume with Japan, according to the American Farm Bureau Federation.

The true bonus could be the fact that an influx of U.S. beef could lower consumer prices in Japan, and, as a result, lead to higher consumption levels in that nation, according to AFBF economist Veronica Nigh.

The announcement that Japan will begin to import U.S. beef from cattle 30 months of age and less will take effect on Friday, Nigh said. The initial rules, imposed by Japan in 2005, permitted U.S. beef imports only from cattle up to 20 months old, after a total ban in 2003 that followed an outbreak of bovine spongiform encephalopathy (BSE).

“Japan’s imports of U.S. beef plunged by 60 percent to some 120,000 metric tons from 2001 to 2011,” Nigh said. “Australian beef producers were the main beneficiaries in an import market worth more than $2 billion.”

But, now that could all change. Late last year, Japan’s food safety organization helped pave the way for this week’s announcement by reporting that the risk from importing beef from cattle aged 30 months or younger from the United States, Canada, France and the Netherlands would be negligible to human health. The Japanese government has since held a series of public consultations and bilateral talks on how the new safety requirements would be met in the supplying countries.

“This is a big win, and it’s the result of seven-plus years of resolute work by both the Bush and Obama administrations,” said AFBF President Bob Stallman. “This is great news for American cattle producers and it should have positive ripple effects for other U.S. food and agricultural sectors.”

“We saw a sustained grassroots push to make sure officials knew how important this milestone is,” Stallman said. “It truly sets the stage and establishes a process for other efforts on breaking down non-tariff barriers.”

According to Nigh, the United States produces large amounts of specific meat cuts and offal that bring higher returns in Japan than in domestic markets. She said Japanese beef prices rose significantly following the 2003 trade restrictions, which severely limited supplies of those cuts. But now, an increased presence of U.S. beef in Japan could bring higher returns for U.S. producers and lower prices for Japanese consumers.

Nigh pointed out a 2010 study by the Agriculture Department’s Economic Research Service, which estimated that every decrease of 1 percent in beef prices in Japan actually leads to increases in consumption greater than 1 percent.

“The positive effects for U.S. beef producers go beyond the actual export volume,” Nigh explained. “This gives U.S. beef an opportunity to lead resurgence in beef consumption. Analysis by USDA indicates Japanese consumers are very price sensitive when it comes to beef purchases, and the increased presence of U.S. beef in the Japanese market will lower their retail beef prices and lead to increased beef consumption, and therefore demand. This would be good news for U.S. producers, as much of this increased demand would likely be captured by U.S. beef.” 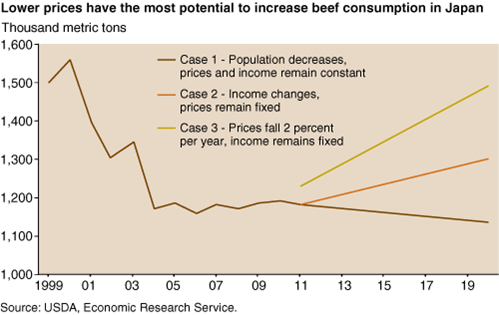