Posted on Jun 3, 2015
Frankfort, KY (June 3, 2015)—New county agricultural cost share dollars are being rolled out across Kentucky, with over $1.69 million approved last month for programs in 12 tobacco dependent counties. 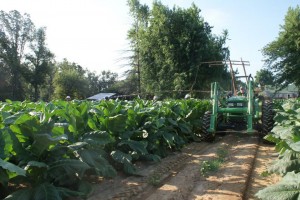 The $1,692,296 in new County Agricultural Investment Program, or CAIP, funds were approved by the state Agricultural Development Board for Campbell, Estill, Garrard, Grayson, Hancock, Henry, Jessamine, Marion, Meade, Montgomery, Muhlenberg and Trimble counties, according to Joel Neaveill with the Governor’s Office of Agricultural Policy. Neaveill told the Tobacco Settlement Agreement Fund Oversight Committee today the dedication of those CAIP dollars is only the beginning.

“The deposits for 2015 have been made into county account. This is the start of, probably over the next few months, a large dedication of county funds toward programs and projects,” said Neaveill.

A total of 118 Kentucky counties receive county allocations of Kentucky tobacco settlement dollars. At least one lawmaker, Sen. Carroll Gibson, R-Leitchfield, wanted to know how those allocations are decided. The answer, he was told, is based on a 15-year formula which Neaveill helped devise.

That formula, created with the passage of 2000 House Bill 611, determines a county’s “relative tobacco dependency” using several pieces of data from the 1997 agricultural census (the most recent at the time) including, but not limited to, the number of tobacco farms in the county, price per pound of tobacco, and a county’s total personal income, said Neaveill. The idea was for all 118 tobacco counties to have “a slice of that pie” relative to their level of dependency, he said.

“The idea is that as personal income grows in a county, the tobacco number will reduce,” he said.

Both Neaveill and GOAP Executive Director Roger Thomas agreed with committee co-chair Rep. Wilson Stone, D-Scottsville, that counties receiving the largest allocation of MSA dollars generally had the largest amounts of tobacco quota at the end of the federal Tobacco Program in 2004. Yet Thomas made tobacco dependency’s role clear, using Kentucky’s smallest county as an example.

Robertson County, with around 2,200 residents and a total area of 100 square miles, is small in population and size, but it was mighty in tobacco production. Thomas said the county gets “a substantial amount” of county agriculture development funds, which totaled $316,290 in 2015.

That’s because “it was so tobacco dependent in the past,” said Thomas.

The committee’s meeting agenda also included a presentation from the Department for Public Health on the state Tobacco Prevention and Cessation Program.