Posted on May 19, 2013
Nelson County FB develops nifty game for ag education thanks to a game developed by Nelson County FB, the county’s third graders are having fun learning about agriculture and our food supply. 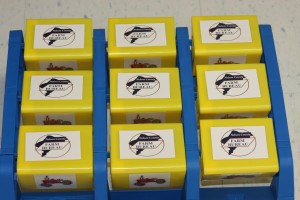 Named “Tic Tac Toe – A Farming We Will Go,” the game is patterned after the popular “Toss Across” game in which participants play tic-tac-toe by lobbing bean bags at targets in an attempt to change the target to their desired ‘X’ or ‘O’. In this case, contestants seek to flip a Nelson County Farm Bureau target to a tractor or a barn. They earn the right to make a toss by correctly answering one of the more than 300 agriculture-related questions developed for the game, which comes in a bag designed and constructed by Nelson County FB members.

The project runs a gamut of Farm Bureau support. It was initiated with a $500 KFB Women’s Program mini-grant. KFB Director Scott Travis of neighboring Spencer County, who represents the district, voluntarily made a donation after hearing about the project. The Nelson County FB Board endorsed it and the county women’s committee did most of the work.

The local FFA chapter and extension office were involved in developing the questions.

“We have a simple objective: We want kids to know where their food comes from,” explained Holly Bischoff, the long-time chairperson of the county’s information committee. “We feel we’ve come up with a fun way for these students to learn.”

Ms. Bischoff and others at Nelson County FB are especially pleased with the team effort. Women’s Committee member Jean Jury applied for the grant and sewed the game bags along with Sarah Wheatley. Ms. Bischoff sewed artwork onto the bean bags. Insurance Agent Adam Wheatley assisted in a number of ways, including distributing games to some of the elementary schools in the county. 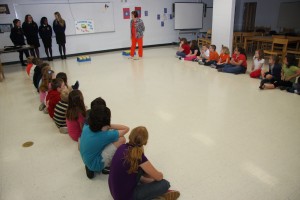 The women’s committee purchased 19 “Toss Across” games from the internet and then customized them.  Recipients are being urged to send in an evaluation form to be eligible for a $50 award to go toward purchasing classroom supplies. There are nine public elementary schools in Nelson County, plus parochial and private schools.

The game was unveiled last month when a group from Nelson County Farm Bureau and FFA visited Emily Hunt’s third grade class at Foster Heights Elementary School in Bardstown. It was a hit. After playing a couple of games, the youngsters shouted their approval when asked if they had fun.

FFA members Audrey Coomes (chapter president), Alyssa Mattingly, Tai Robbins and Gabby Cheatham played the first game so the students could see how it goes. Then the 25 students played. The game can be played either by teams or as an individual competition.

The questions include: “Where do pork chops come from?” “What is hay?” “What is cotton used for?” “What is the most popular pizza topping?” “What do all plants and animals need to live?” “What is a baby sheep called?” “What is a major source of energy for all things?” “What do you call the thick hair on a horse’s neck?”

Nelson County FB plans to find a home for all of the games.

“Maybe the children will be able to teach their parents something,” said Ms. Bischoff.