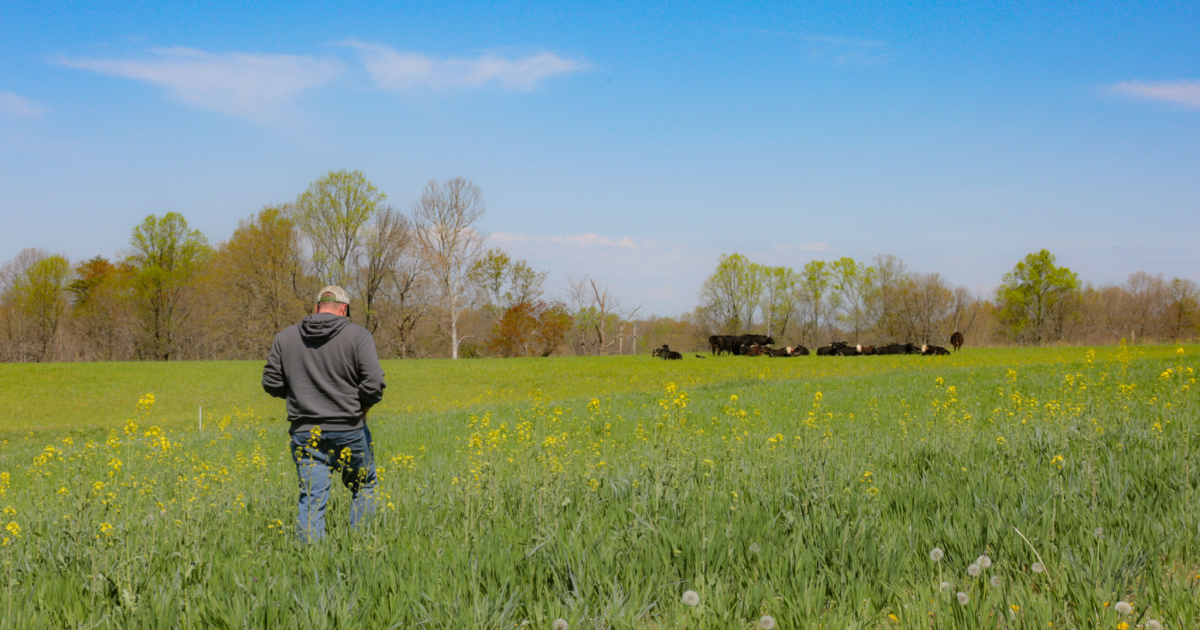 As the ag industry moves forward in climate discussions, cover crops will play an important role in its story.

The use of cover crops to improve production farmland isn’t new, however the story of just how important this agricultural practice is may be something the general population is not familiar with.

But Pulaski County grain producer Chris Pierce has made the practice as much of his farming operation as the row crops themselves. He began his journey into cover crop use nearly a decade ago and now utilizes a variety of them on all of the crop acres of his, and wife Rebekah’s, cash grain crops operation.

“My wife and I began our farming operation here, in 2007 and we originally started out farming around 500 acres,” he said. “We've historically grown corn, soybeans, wheat, and some canola in the past, and we’ve started to do some custom grazing work, and we also do some co-op grazing in our community with cover crops we grow on our farm.”

Over the years, Pierce said he has transitioned from being very much a commercial ag model to more of a soil health model in their farming system.

“We started planting cover crops for soil health purposes in 2012, and we progressed now to where we have cover crops on 100 percent of our acres,” he said.

That is a tall task considering the farming operation has grown to now include 6,000 acres. But Pierce has seen, first-hand, the benefits of using cover crops not only to enrich the soils on his land but to be a better steward of his natural resources.

“I think by using cover crops, we're farming more like my great grandparents did and these soils should grow crops for 1000s of years, the way Lord created them,” he said.  “We have found ways that we cycle nutrients better, our land is absorbing water more readily, and we're managing weeds easier from the residues that cover crops leave.”

One of the external benefits Pierce didn't expect to see was nutrient management.

“The way we cycle nutrients and the way that nutrients are becoming available naturally in the soil, we've lowered fertilizer applications,” he said. “We have always been a no-till farming operation and what we've seen by using cover crops, we're lowering our machinery costs, we're lowering our fuel costs on the farm, and that's allowed us to take our working capital and farm more acres. For us, it has been an economic decision, as well as a choice of doing the right thing for the land.”

Pierce is in a unique position, in that he has also taught the Adult Agriculture Education Program with the Kentucky Community and Technical College System since 2004 working within communities, working closely with young farmers and beginning farmers.

“We are helping them in making better decisions and to establish their farming businesses that would provide a better quality of life for rural communities and themselves,” he said. “The farmers that I serve are looking for answers that may not be provided to them from a parent or a grandparent, or another senior community member, so we're providing access to agricultural experience in a local group setting.”

Having a more community wide farming economy is important to Pierce, who said that what farmer families want the most is the ability to farm another year, and the years after that.

“We want to continue to farm, and with young farmers, the one thing that I've seen over my tenure at KCTCS is that transition or ideology of being responsive to their environment,” he said. “The generation that I'm servicing right now has been aware of environmental issues for most of their life; it's been part of their raising, and with the discussions present in the media, they're conscious of it.”

Pierce said this newer generation is in tune with smart environmental practices for a couple of reasons.

“Number one, they want to take care of that farm and they’re trying to establish their business,” he said. “And secondly, most of them have limited resources, so things like rotational grazing and water resource development and protection, is important to them because they have a limited amount of land, and they want to maximize it. By using these best management practices that are environmentally friendly, they're able to better maximize the use of the resources they have on their farm.”

Pierce is a strong advocate for the agriculture community and is active in explaining to non-farming neighbors some of the practices that occur on his farm.

“We can use cover crops in a way that leverage economic resources, we're putting the seeds out there that are improving nutrient availability in the soil, and with a diversified farm, we’re able to graze that cover crop and incorporate livestock into their cropping system,” he said. “We want to be good stewards of the land and what we have to do as Farm Bureau members, and as agriculturalists, is be proactive,” he said. “We need to be on the offense of telling our story, because we've got a great story to tell.”

“As the agriculture industry moves deeper into environmental discussions, it’s important to hear from producers like Chris, who are making great strides in reducing the carbon footprint of their operations while sharing practices that farm families are already involved in,” said Kentucky Farm Bureau President Mark Haney. “There is so much our industry is doing to take care of the natural resources that take care of us. What we must do now is have our voices heard at all levels to ensure our governmental leaders understand these practices on the farm are part of the solution to climate issues.”