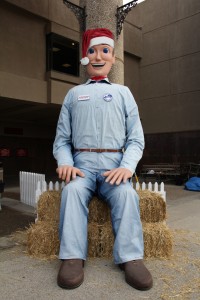 Howdy there, y’all, and Happy New Year from your old pal Freddy Farm Bureau! I know you aren’t used to hearin’ much outta me unless there’s a mess of fried food on sticks being sold near my little white fence at the state fair, but I had a spell to reflect on things and wanted to share some of my goals for the New Year with ya. Ready for a few Freddy-sized resolutions? Here we go. In 2014, I resolve to…

1. Stand up and stretch my legs more often.       Those hay bales I sit on may look mighty comfortable, but a man’s gotta move!

3. Bench-press a cow.      This is obviously my physical fitness goal for the year. Plus, when I’m done, I’ll have a milk shake ready to go.

4. Be the next celebrity to endorse Wrangler jeans.      Denim spokesperson? I should have this in the bag.

5. Remind everyone that you don’t have to actually own chickens to “be up with the chickens.”      Early to bed, early to rise…

6. Visit Coney Island on July 4th and show Joey Chestnut how it’s REALLY done.      I’m pretty sure I would be the instant fan-favorite in a hot dog eating contest.

7. Replace hay bales with a spinning chair like they use on The Voice.      After 56 years of leaning against that column outside of Freedom Hall, I’m ready for an upgrade.

9. Conquer my fear of heights.      A rather unfortunate condition for someone 18 feet tall…

10. Travel someplace exotic, like Canada.      I hear they have good bacon up north.

That list should keep me pretty busy until August rolls around again and I am back at my post at the state fair. I hope your New Year’s resolutions bring you as much joy as mine do. Not sure if I’ll hit them all, but it’s good to have something to shoot for. Stay warm out there and keep an eye out for me on the Twitter!