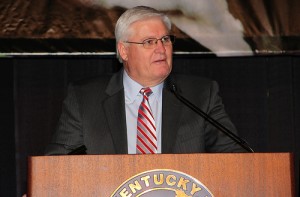 "As a cattle producer, I know how important livestock marketing facilities are to our industry. It was with great sadness I learned about the terrible fire that devastated the Bluegrass Stockyards structure in Lexington over the weekend. That venue has been a part of the state’s cattle business for decades and played such an important role in building Kentucky’s cattle industry into one of the best in the country. We at Kentucky Farm Bureau (KFB) offer our encouragement, support and prayers to the owners, managers and employees of the stockyard as they move forward to re-establish the facility and to those surrounding businesses that were affected as a result of the fire. While we are saddened by the loss of animals that were located at the stockyards, we are grateful that no one was injured. We are also thankful for the firefighters who bravely responded to extinguish the fire. KFB remains solidly in support of our cattle producers, especially those affected by this tragedy and will continue to be active in ensuring our cattle industry remains strong for our members and all state producers, as we move forward in the days, weeks and months to come."