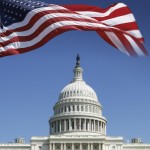 WASHINGTON, D.C., July 30, 2012—The American Farm Bureau Federation said today that a House proposal to extend the current farm bill for one year fails to move the nation any closer to securing a comprehensive, long-term farm bill and the organization would stand in opposition.

“A one-year extension offers our farm and ranch families nothing in the way of long-term policy certainty,” said AFBF President Bob Stallman. “Farmers and ranchers always face decisions that carry very serious financial ramifications, such as planting a crop, buying land or building a herd, and we need clear and confident signals from our lawmakers.”

Stallman pointed out that the Senate-passed farm bill and the bill approved by the House Agriculture Committee already include disaster provisions for livestock farmers, and those measures would likely be included in any conference committee held for the long-term legislation. Meanwhile, the extension bill “does nothing to help hog or poultry producers, little to provide assistance to the dairy industry and nothing to aid fruit and vegetable producers who may not have crop insurance available to them as a risk management tool,” according to Stallman.

“Both the Senate and the House Agriculture Committee have produced reform-minded, bipartisan bills that address many of the core principles we believe are important, such as strengthening crop insurance as a reliable risk management tool,” Stallman said. “We are encouraging members of the House and their leaders to recognize the example set by both the Senate and House Agriculture Committee chairs and ranking members to forge fiscally responsible bipartisan legislation. An extension falls well short of that target.”