Posted on Sep 21, 2012
Kentucky’s farmers have been working behind the scenes for generations, growing our food while remaining largely unknown. A trend toward retail agriculture is changing this, however, as more and more farmers are selling their products directly to the public. The current generation of farmers is both tech-savvy and passionate about farming. They are coming home from college with a determination to move their family operations into a whole new realm. 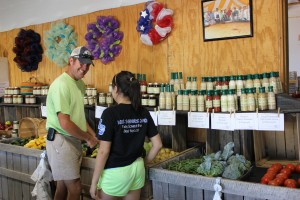 One such farmer is Jeremy Hinton, an eighth-generation farmer who returned to his family’s LaRue County farm after graduating from the University of Kentucky. Jeremy began helping out at what was then a traditional row crop operation, and wanted to find ways to diversify the family business. He started thinking about vegetable and fruit production, and soon discovered the allure of retail agriculture.

When Jeremy’s fiancé Joanna wanted to become more involved in the day-to-day operations of the family farm, he knew it was time to move the operation in a new direction.  A visit to a local tobacco farm with the intention to lease it turned into a whole new venture, and Jeremy soon found his business completely transformed.

“About three weeks after Joanna and I were married, we decided to try to lease tobacco quota from a lady in the area whose husband had passed away,” Jeremy explained.  “This farm also had an apple and peach orchard, and somehow we ended up leasing the orchard instead. I tell people either we were at the right place at the right time, or we should have run away while we had the chance.”

Joanna eventually left her job as Executive Director of a non-profit organization so she could be more involved in the family business, and it evolved into what is now Hinton’s Orchard and Farm Market, which is a member of KFB’s Certified Roadside Farm Markets Program. Jeremy and Joanna began operating the Tommy Bennett Orchard in LaRue County, and though they had no experience in raising tree fruit at that point, they learned quickly.

“We learned a lot that year, and we found out that we had a lot more to learn,” Hinton reflected.  “Some of the first people who offered advice were Mark and Don Haney from Farm Bureau, and they continue to do so. We have received a tremendous amount of help from a network of orchard operators across the state, and I wish I could credit them all by name.”

The Hintons kept their operation at the Bennett location for four years, and then bought their current farm in 2006.  In December 2010, they bought another 20-acre farm; they planted 400 peach trees and 100 pear trees in spring of 2011. In addition to that, they currently have 700 apple trees and 500 peach trees on their other farm.

“It just keeps growing every year,” said Hinton.  “Hinton’s Orchard is a true family operation.  On busy days in the summer and fall, you are likely to find us working alongside both of my parents, as well as Joanna’s father and sister. Our two young children are always close-by, too.”

The Hintons are a part of a growing trend that is moving Kentucky farmers into the booming business of retail agriculture. While Jeremy and Joanna Hinton never expected to move away from a traditional farming operation to the relatively-new realm of retail agriculture, the shift has proven to be a good fit.

“It is a completely different game,” said Jeremy. “One of the most rewarding aspects is the ability to sell directly to the consumer. My wife and I are both outgoing and love being around people, so we enjoy getting to interact with customers.”

The prospect of direct marketing is an attractive one for many producers, particularly when an opportunity to educate consumers about where their food comes from is present.

“I enjoy talking to people about our operation and how we do things,” Jeremy Hinton reflected.  “Sometimes people come in April looking for watermelon, and I show them how big the plants are at that point.  It is an eye-opening experience for consumers who have never been around a farm.  We love hosting school field trips in the fall and teaching kids where their food comes from.  Working directly with the public allows us to educate our consumers, and that is an important component of our business mission.”

Retail agriculture focuses on consumer-oriented marketing, and is more diversified than traditional operations. Its emphasis on entrepreneurial skills encourages young farmers to find new ways of getting their products to customers. Gary Matteson, Vice President of the Young, Beginning, and Small Farmer Outreach Programs for the Farm Credit Council, said there are many factors playing into this growing trend.

“Many farmers are looking for more marketing channels to sell what they produce,” said Matteson. “Combine that with an increase in consumer demand for knowing where our food comes from, and you have a new venue for selling produce.  This demand has stimulated a lot of farmers to seek markets catering to that demand, whether that is a farmer’s market or changing their production practices to produce something of higher value, such as grass-fed beef.”

In an article called “The Emergence of Retail Agriculture,” Matteson states that young, beginning, and small farmers in particular have shown interest in direct-to-consumer sales in the local foods marketplace. This includes venues such as farmers’ markets, roadside stands, and through community-supported agriculture (CSAs).

Matteson’s article also points out that in the Ag Census year of 2007, organic, direct-to-retail, and local foods sales conservatively added up to $8 billion. CSA farms were present in nearly 2,100 counties according to the 2007 Ag Census, and a December 2011 national survey from the USDA Economic Research Service estimated that in 2008, sales of local foods topped $4.8 billion.  These figures are hard to ignore.

In an interview, Matteson said that the trend is particularly prevalent among young farmers.  They are returning to the farm with college degrees and are armed with experience in social media, which makes them keenly aware of the benefit of new and improved marketing techniques.

“It is natural for this young generation of farmers to use social media platforms to sell their products directly to the consumer,” said Matteson. “Another factor that is driving young people back to the farm is that farming has become ‘cool.’ People want local food, and farmers have something people want, so that makes them very valuable. These young farmers are coming back to the farm with a certain amount of confidence, because they have a product that people want.  They are selling sweet corn off the back of a wagon and creating a Facebook page that tells people when their products are ready; in the process, they are selling themselves along with those products.  It’s a great combination.”

This new trend benefits both the consumer and agriculture in general, Matteson emphasized, in numerous ways.

“It benefits consumers by giving them a product that they want,” said Matteson.  “They want fresh, locally-grown food and they want to get to know the farmer who is growing it. Selling directly to the consumer allows for both of these things.  This new generation of farmers is delivering a quality product combined with service, and that is exactly what the consumer wants.”

Agriculture in general will continue to benefit from this renewed interest in buying local.

“If someone builds a relationship with a local farmer, they become an indirect advocate for farming,” Matteson stated. “The consumer starts to take a personal interest in farming.  By becoming a Facebook fan of a local farmer’s market, consumers are telling their friends that they love farming and that they support Kentucky farms. This is a good thing for agriculture, and even better for Kentucky’s hard-working farmers.”

Jeremy Hinton said one thing he has noticed since he began selling retail is that consumers would rather buy local, traditional produce as opposed to something organic that was grown in California.

“It gives them a chance to support local farmers and local businesses,” said Hinton. “Also, they know they are getting better quality and freshness. Selling directly to consumers allows us to both share with them how their food was grown and build a personal connection.”

Like other farmers of his generation, Jeremy Hinton makes good use of social media and direct marketing opportunities. Hinton’s Orchards has a Facebook presence, and Jeremy said they are up to more than 3,000 fans.

“It is a great way to advertise the events that we host, as well as a means of telling customers when we have different kinds of produce ready,” said Hinton. “For example, we let them know when we have peaches ready and we advertise the various festivals we host. We host a festival to feature each of our primary crops: strawberries, peaches, apples and pumpkins. These festivals include both activities and foods that spotlight our seasonal crops. October is by far our busiest month, with school tours nearly every week day and activities for families every weekend.”

Joanna Hinton also sends out an electronic newsletter and shares recipes, which provides yet another method of staying in direct contact with consumers.  This newsletter is currently sent out monthly to just over 1,000 subscribers, and is sent more frequently in the fall. Hinton’s Orchard fans can also find a blog on its web site (http://www.hintonsorchard.com/).

Looking to the future, Hinton’s Orchard plans to just keep on growing.

“We visit as many orchards, farm markets, and other retail businesses as we can and leave with ideas of things we’d like to try,” Jeremy noted.  “Visiting other businesses is an important part of what we do, and I am a firm believer that most good ideas have already happened.  You just need to make concepts that are already out there your own.”

An example of this is when the Hintons visited the Louisville Science Center and saw how much their young children enjoyed playing in a Sesame Street display that featured a grocery area.   They took this idea home with them, and converted a second grain bin to a play area, adding “Hinton’s Mini Market,” where kids can play with wooden fruits and vegetables.

“It’s a simple concept, but the kids love it,” said Hinton  “We try to add something new to our play area each year. This helps make our farm into more of a family destination, with many activities for families to enjoy.”

Hinton continued, “Hinton’s is not a place you visit to just buy something and leave; we want people to stay and enjoy the farm. We want them to bring their families here for a few hours instead of going to the movies, and learn a little about where their food comes from. We are grateful for the opportunity for our family to work together in a growing business that promotes our industry and educates our consumers.”