Rebuilding Kentucky Farms One Fencerow at a Time 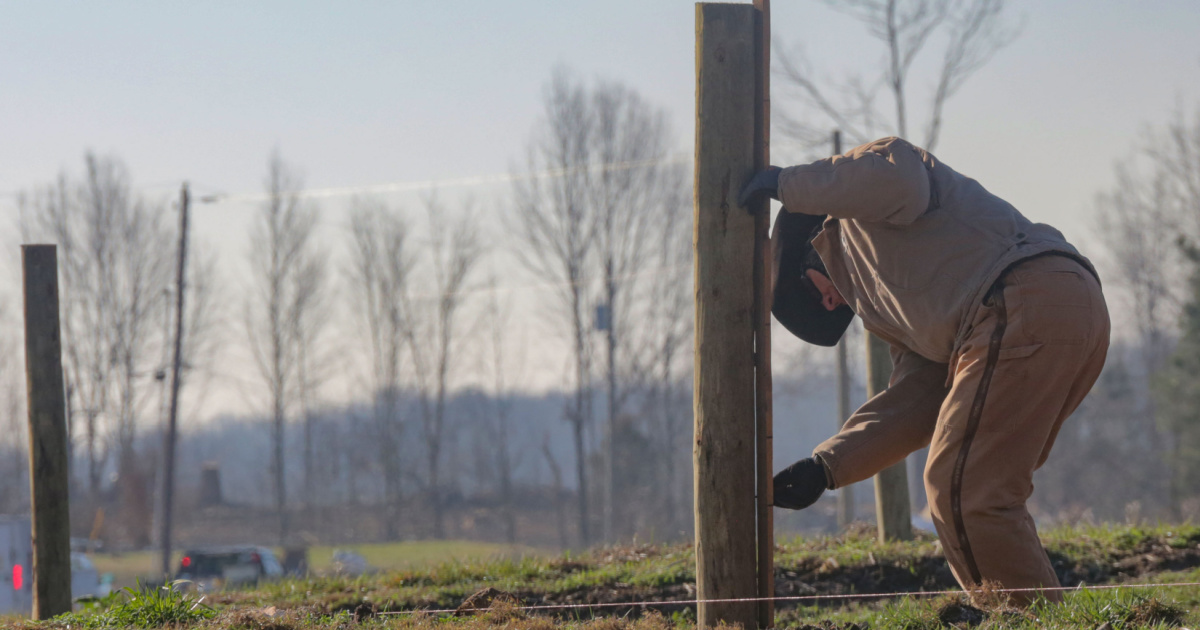 The job of rebuilding a farming infrastructure got a much-needed boost
from some unexpected neighbors.

The tornadoes that swept through the state late December 10 and the early morning hours of the next day will never be forgotten, especially by those in the hardest-hit areas. The community of Bremen in, Muhlenberg County was one of those.

Countless people were affected in this small, close-knit community. Long-time resident Danny Miller saw a tremendous amount of destruction at his family’s Lost Valley Farms due to the twister that moved through leaving behind dead cattle, damaged grain bins, and untold damage to structures and equipment.

But worse than that for him and his family was the loss of his brother and sister-in-law.

“My brother farmed with me and it's hard looking over the farm and seeing all the damage," he said. "You can hardly believe it until you open your eyes and look."

And while the loss of family members can never be replaced, the pieces of the farm that were damaged or destroyed can be, noted Danny Miller.

“I have a grandson who farms with me, and together we’ll just take one day at a time and rebuild as we are able to.

The Millers know getting everything back to somewhat normal won’t be easy but the outpouring of help from neighbors near and far has been amazing to them and many others who are working desperately to put back the pieces of their lives.

"It's amazing the number of people who have shown up to help," he said. "I want to say, ‘Thank you very much. I appreciate it a lot. I couldn't have made it without your help.’”

Many of those people are unknown to Danny Miller and his family but as news spread throughout the area and the country, help began to pour in.

Eric Miller, the territorial manager for Stay-Tuff Fence Manufacturing, located in Ohio, heard of the devastation and knew his company could help in the rebuilding process.

“I have deep roots in the agricultural community myself, so I started seeing stories pop up that directly related to my interest, and my compassion for the people who were involved in the tornadoes,” he said. “So, I approached the company, and pitched to them an idea of helping out farmers in the area, which was very well received, and we made a decision within about, within the first five minutes to help. And it took us about 30 to 40 minutes to get the ball rolling.”

And on a clear January day; a day in stark contrast to that one in December, dozens of volunteers from around the region, some coming from as far away as Cleveland and Mississippi, made their way to the little town of Bremen to help rebuild fences that had been destroyed by the tornado, but more importantly, they were there to help farm families begin to rebuild their lives.

Eric Miller’s quick action included working with Jeremy McGill, a territory manager with Gallagher North America, which is a leader in electric fencing material for livestock.

For him, the project of helping farmers in the area was a little more personal since Muhlenberg County is his home. It was McGill who initially reached out to Miller to see what the two companies could do to help in relief efforts.

“Stay-Tuff and Gallagher are two different companies, but we do partner together all over the country, doing fence schools and trainings for farmer groups, universities, and soil conservation districts, so it was a natural fit to work together on this project,” he said. “Shortly after the tornado, I was contacted by Eddie Melton of Kentucky Farm Bureau about some ways that we could help out with the relief effort from the permanent and temporary electric fencing side.”

Melton, KFB First Vice President, said because of the relationships the organization has with agricultural companies and organizations in this state and beyond, he knew there would be a lot of people who wanted to help.

“Those who are a part of the overall agriculture community inherently want to help their neighbors when something like this happens, and we’re all neighbors when it comes to farm families,” he said. “Jeremy conveyed to me that he knew there would be a lot of folks who wanted to help; he was just waiting on a call and I’m glad to have made the call on behalf of KFB. And the ag community answered in a very big way.”

McGill knows Danny Miller and most of the farm families in the area so helping out was never in question as he began to discover the extent of the damage.

“This is my first experience, in 16 years working with Gallagher, doing anything like this, especially this close to home,” he said. “And I’ve never seen anything quite like this. But it's mind-blowing to see the number of people who have come to help; not just from the agriculture side, but just from the community as a whole.”

Local University of Kentucky College of Agriculture Food and Environment Extension agent Darrell Simpson also helped in coordinating the efforts made to get fences rebuilt.

“Jeremy and Eric really stepped up and provided the labor, as well as some of the fencing materials, and while they couldn't provide everything, they really did a great job in what they could provide, not only for Muhlenberg County, but they also for Hopkins and Caldwell Counties,” he said. “From there, it was just a matter of seeing what those guys needed. I was able to coordinate it with the producers in terms of having posts available, and the areas cleared so that when Eric and his team came in, they could build fences.”

Simpson added that there were so many volunteers that came in early and did such great work in terms of cleaning out and picking up debris, it was amazing to be a part of it and to watch that happen.

In addition to their initial visit to the area, Eric Miller and crew came a second time to help finish up some of the work they began. He said it was an experience like no other.

“I was touched by the stories and by meeting the people; you could just feel the emotions in the air,” he said.  “I don't know how to explain it, but for everybody who came out to help, there was this uniformity of overwhelming emotion and the satisfaction, and just the desire to help. And everybody was sorry they had to leave. We wish we could have stayed longer.”

Danny Miller is grateful for those people who have been to his farm helping to put some of the pieces back together but the damage and the loss he has experienced is something he hopes to never experience again.