A record crowd of more than 2,000 Kentucky Farm Bureau (KFB) members and guests made their way to Louisville’s Galt House for the organization’s 100th Annual Meeting. This year’s event culminated a year of Centennial Celebrations that took place at various county Farm Bureau’s throughout the state during 2019.  The theme of this year’s meeting was “Stronger Together.”

The event included several commodity sessions such as the very popular University of Kentucky College of Agriculture, Food and Environment’s yearly ag outlook presentation. UK ag economists told attendees that farm cash receipts are expected to be $5.9 billion and net farm income is expected to increase by 10 percent, nationally.

Several awards were also presented throughout the course of the meeting including KFB Farmer of the Year, Distinguished Service Awards, and the Outstanding Young Farm Family.

KFB President Mark Haney addressed the gathering, during his annual President’s Address, and told members how important each of them is to the success of the organization in keeping with the theme.

“Kentucky Farm Bureau has been built on a grassroots foundation that has served to create the largest agriculture organization in this state and one of the largest in the country,” he said. “Our ability to effectively advocate for our ag industry is based on the involvement we have at the local level and the efforts each of you makes to improve life in your communities and across the Commonwealth.” 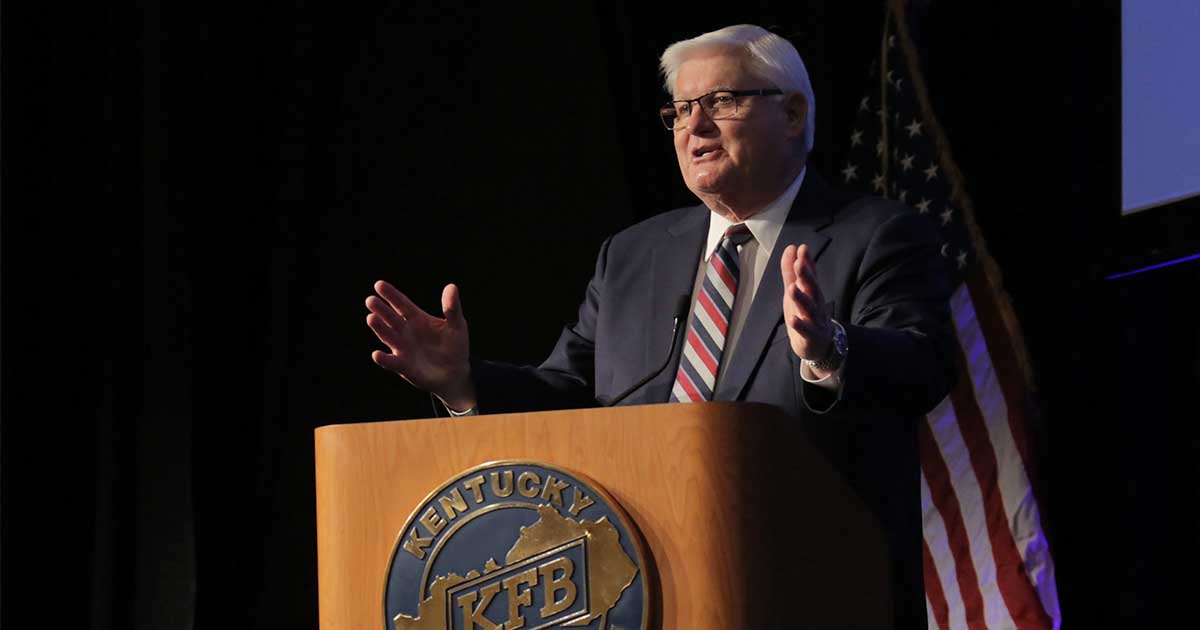 Haney discussed initiatives that are taking place within the organization such as Bluegrass Senior Living, a series of personal care and secure memory care facilities planned in several locations across the state, with the first set to open in Somerset in early 2020; and the Vision 100 Committee, comprised of leaders from across the state, along with employees from the Federation and the insurance company.  This committee will help in the efforts to look to the future defining the organization’s strategy for the next century.

Haney also emphasized the importance of the Insurance Company to the overall success of KFB, and its agents located in all 120 counties.

“The Insurance Company is the engine that drives this organization and serves as our most valuable member benefit,” he said. “We could not be successful in our advocacy efforts without the support of our agencies found in each county.

In speaking about issues affecting the farm, Haney spoke of several priorities that have been at the center of advocacy efforts throughout the past year including immigration and ag labor reform, continuing efforts to shore up infrastructure needs, the necessity of adequate rural broadband coverage, and how important the trade dollar is to farm families in this state and across the country. He specifically mentioned how important it is to get trade issues resolved and how valuable the U.S.-Mexico-Canada Trade Agreement will be to agriculture.

In concluding, Haney told members to be bold and committed when it comes to the ag industry and the KFB organization.

“It was our grandparents and parents who worked so hard to move this organization forward and build the foundation on which KFB has been built,” he said. “But it’s a new day and things are different now than they were for them. This is our Farm Bureau and together we can make such a difference in the lives of all Kentuckians. We truly are stronger together.”