On Farm Safety Week, Comer Urges Farmers to Stay Safe for Themselves and Their Families - Kentucky Farm Bureau

On Farm Safety Week, Comer Urges Farmers to Stay Safe for Themselves and Their Families


FRANKFORT, Ky. — Agriculture Commissioner James Comer urged Kentucky farmers to put safety first for themselves and for their families as he declared the week of Sept. 21-27 National Farm Safety and Health Week in Kentucky.

“An accident on the farm affects the whole family and even an entire community,” Commissioner Comer said. “A farming-related fatality or injury creates emotional distress in the family, but it also can disrupt the family’s income and even cause the family to lose the farm. I hope all farmers will take an extra moment to think about working as safely as possible during Farm Safety and Health Week and throughout the year.” 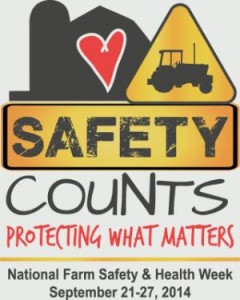 The Kentucky Department of Agriculture’s Farm and Home Safety Program is commemorating this special week with a series of safety demonstrations at high schools across the state. The first “Rally for Life” was held Thursday at Central Hardin High School. Events are scheduled Monday at Owen County High School, Wednesday at Graves County High School, and Oct. 2 at LaRue County High School. Each rally will begin at 1 p.m. local time and will feature a rescue from a mock all-terrain vehicle accident with local emergency responders treating students acting as “victims.”

Kentucky recorded 14 farming-related fatalities in 2013, down from 22 in 2011 and 50 in 1995. On a percentage basis, farming remains one of the most dangerous occupations in the nation, according to the National Institute for Occupational Safety and Health. ATV safety has emerged as a major issue in Kentucky; the Consumer Product Safety Commission reported that Kentucky was third in the nation with 119 ATV-related fatalities from 2009-2012.

The Farm and Home Safety Program travels all over Kentucky to deliver farm and ATV safety demonstrations and to spread awareness of how to stay safe when working and playing on the farm. The program operates a one-of-a-kind rollover tractor simulator that demonstrates how a rollover protective structure (ROPS) and seat belt can save a tractor operator from injury or death in the event of a rollover. The program also uses a miniature grain bin and gravity wagon to show the risk of becoming trapped in grain, and a power-take-off (PTO) demonstration apparatus that demonstrates the dangers of getting caught in a moving PTO, which is a rapidly rotating drive shaft used to power farm implements.