On-Farm Grain Storage: A Game-Changer for Many Producers 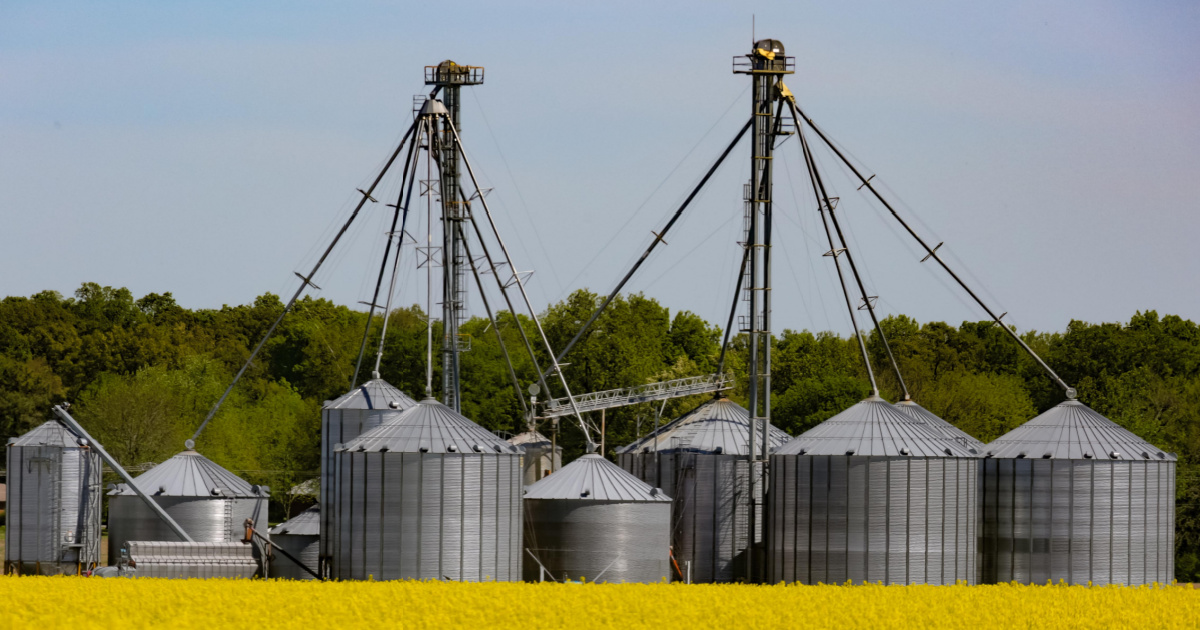 Farmers see many advantages to storing their grain crops at home

As Hurricane Ida made landfall near the mouth of the Mississippi, no one could predict the damage it would cause including stopping most river traffic. And while the flow of barges has somewhat returned to normal, the fear of many farmers was how to get their grain crops on their way to export markets by way of the Mighty Mississippi.

Kentucky Farm Bureau Second Vice President Sharon Furches said, while many people don’t realize the importance of the waterways as an essential part of the country’s overall infrastructure, she and husband Tripp, owners and operators of Furches Farms, know all too well if river traffic stops, grain leaving the farm becomes an issue.

“We had about 80,000-bushel capacity back in 1992,” she said. “We have strategically added to that over the years and today we have 600,000-bushel storage and the infrastructure to dry and manage those bushels. We have come to depend on the ability to store grain, but still need those grain barges to keep moving.”

And while the Furcheses said they didn’t have a crystal ball to look into the future, they saw the multiple advantages such storage facilities would have for their farming operation some time ago.

“As the farm grew, we knew we needed more on-farm storage, and that became a big piece of our marketing plan,” she said. “The importance of it really elevated for us in particular years when marketing was kind of a make-or-break thing for the farm.”

From purely a marketing standpoint, on-farm grain storage made sense for Furches Farms.

“The stars don't always align, but this year we have higher prices in the grain market, and we have good yields at this point in time,” Furches said. “We're hoping that all of that continues, but both of those things together make on-farm storage even more important.”

But add a hurricane into the mix and consider the quantity of grain from this area that travels down the Mississippi River, and you’re left with wide-spread impact across the region as barge traffic slowed to a crawl after the August storm came through.

While a little normalcy has returned to the situation, Furches said there was a period of time when some producers were looking at a very difficult situation when it came to storage for their harvested grain.

“Not everyone contracts their crop or grain, and if they don't, the elevators on the river were at a point where they had been forced to limit the grain that they can take, because of the backups caused by the hurricane, only accepting grain that they had under contract,” she said.

Even with the situation improving These circumstances serve as an example of just how valuable on-farm grain storage can be.

Caldwell County Farm Bureau President Craig Roberts, and owner of Roberts Farms, has been proactive in his efforts to install storage for his grain crops, one of which is white corn.

Over the years, Roberts has created a network of storage bins in addition to these and plans to add another 10,000-bushel bin for soybeans. For him, having adequate grain storage is as much about economics as it is convenience.

“We watch the markets every day and I have already sold corn for the 2022 crop; it’s contracted for December of ‘22, and I’ve already sold some soybeans for the fall of ’22,” he said. “The price was right, and I hated not to, and who knows, we could see seven- or eight-dollar beans next year. I don't think we will, but I can say, ‘Hey, I've got some sold at $12.’”

Having the ability to store large amounts of grain has enabled Roberts to be market-savvy not only for sold grain, but also in watching barge freight charges.

“The hurricane affected freight prices on barges. But for years, at this time, barge freight has gone up and that cuts the farmer’s dollar on soybeans and corn,” he said. “If you have the storage facility to hold that grain until after the first of the year, and see that those prices have dropped some, it has helped me a lot.”

Bill Clift of C&C Ag Enterprises LLC, who constructed the most recent grain bin on the Roberts’ farm as well as the original facility, fully understands how beneficial those bins can be, especially in a year like 2021.

He touted timeliness as a key factor that makes on-farm grain storage such an asset, along with increased farmer autonomy and crop quality control.

“Granaries are getting tougher and tougher to deliver to during fall harvest. To facilitate harvest, the farmers, including myself, want to be able to store the grain and worry about getting it to market afterwards,” he said.

Clift, who has been constructing grain bins for 25 years, has seen an increase in demand for his services building on-farm grain storage facilities.

“We built a lot of bins in 2013 and it’s just been a steady climb since then. And we’ve gone from building just basically single grain bins to now there’s people that, they’re wanting to do the whole facility,” he said.

Furches looks at grain bins as a necessity as opposed to a luxury.

“It's an absolute necessity, and the sizes of these bins can vary depending on whatever is appropriate for an individual farmer,” she said. “We have had people ask us to store grain for them and we just don’t have any extra storage to spare right now. As crops get bigger and dealing with market situations gets harder, you can’t afford to find yourself in a situation where you need storage and don’t have it, not to mention the difficulties Mother Nature can throw at you.”