Posted on Aug 6, 2015
Louisville, KY (August 6, 2015) – A trip to the Kentucky State Fair is simply considered incomplete without taking time to visit everybody’s larger-than-life, denim-clad friend, Freddy Farm Bureau. He returns to his favorite people-watching spot on the front porch of Freedom Hall, sitting tall on his traditional stack of hay bales August 20-30 – and he’s eager to visit with friends both new and old. 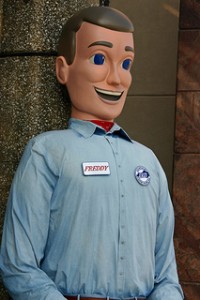 For the 58th consecutive year, Freddy Farm Bureau puts his 18-foot tall frame, extensive farm knowledge and family-friendly banter on display from 9am-8pm daily during the Fair. Yet, as even the casual passerby can imagine, it takes a big man to handle the duties given to Freddy. Although he’s certainly the tallest person in the state never recruited to play basketball, he has always been a huge ambassador for sharing the farmer’s story.

Over the years Freddy Farm Bureau has used his extra-large dose of southern charm to win the hearts of fairgoers everywhere and has even become an unofficial meeting place for many fairgoers. Freddy talks to and takes pictures with thousands of people each year as they wait by his white picket fence for friends and family to arrive.

The good news for Kentucky Farm Bureau’s biggest member is that it seems like he was custom-made for telling the story of agriculture. Neither is Freddy alone in his duties – he represents more than 466,000 Farm Bureau member families in the state of Kentucky.

Whether fairgoers are visiting Freddy Farm Bureau for the very first time or simply reminiscing about their childhood talks to the big man with the never-ending smile, they’ll want to save a few minutes of their state fair schedule to see him this year.