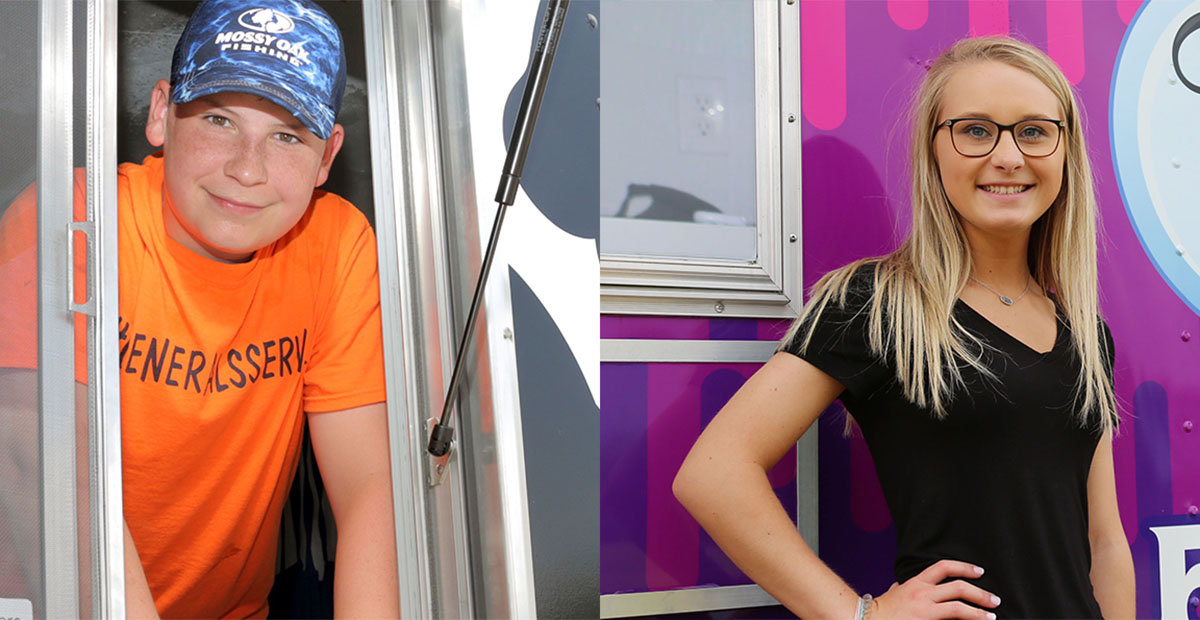 The Merriam-Webster dictionary defines the word “entrepreneur” as being, “one who organizes, manages, and assumes the risks of a business or enterprise.”

With that said, the likely image of an entrepreneur is not necessarily that of a teenager. However, Ben Williams and Taylor Cook did not get that memo. In fact, these two teens have been thinking about running a business of their own for quite some time.

Ironically, they were thinking of the same type of venture and turned to same person, Carl Chaney of Chaney’s Dairy Barn, to serve as a mentor, of sorts, to help get them started in their respective ice cream businesses.

“I started when I was in FFA in high school,” said Cook. The idea became my SAE (Supervised Agricultural Experience) but it was my dream to do this since I was a little girl, and I love ice cream.”

Williams said much the same, having long wanted to do something along the ice cream line as well as getting a start through FFA.

“I wanted to do something kind of different for my SAE as well as to help the dairy industry and the Kentucky Proud program,” said Williams. “I thought this would be a way to incorporate both of those.”

Chaney said both of these young people have a great drive and entrepreneurial spirit in working hard to be successful.

“When our family started the ice cream business, we had so many people who were willing to help us,” he said. “I think we always felt like if we ever got to that point, we would try to do the exact same thing, and when you get two people like Ben and Taylor who are interested, it gives you a good feeling”

Both Cook and Williams began their operations using ice cream from Chaney’s. In fact, Williams still does. But Cook now has her own “manufacturing” facility, making her own “Taylor Belle’s” ice cream.

“I am very grateful for the Chaney’s,” said Cook. “When I met them at State Fair for the first time, I told them about my idea of wanting to do ice cream and they told me they would show me everything I would need to know.”

Cook also said once she was ready to make her own ice cream, Chaney, again, offered his knowledge to help her with that stage of the business.

Williams learned of Chaney’s Dairy Barn while visiting with his family, remembering what he learned about their dairy and their delicious ice cream.

“When I realized I wanted to do an ice cream truck, I was thinking which ice cream I could get, and I remembered Chaney’s Dairy Barn,” he said. I thought that would be something really special to use their ice cream for my business. So, I met with Mr. Chaney, talked to him about it and he thought it was a great idea.”

While these young business owners are providing a yummy treat for their customers, both also recognize they are now a part of the state’s dairy industry, something Chaney thinks is good for the future of the industry.

“The fact that these two young people chose the dairy industry as what they wanted to support, to me that is just fantastic,” he said.

Cook gets many of her ingredients and much of her milk from state sources and realizes the work that goes into being in the dairy business.

“I like being part of the dairy industry and it makes me think of all this hard work and dedication goes into it. It should not be something that we take for granted,” she said.

Williams said he has learned a great deal about the dairy industry since beginning his business venture.

“I think it is something special that Mr. Chaney is passing his knowledge down to me and making me more aware of the dairy industry,” he said.  “It’s important, especially for young people because we are the future of agriculture.”

Chaney said it’s imperative to get young people involved in an industry that is experiencing many challenges.

“There hasn’t been a whole lot of good news for the dairy industry in the last few years, but when two people like Ben and Taylor, who are interested, it gives you a good feeling. We are blessed to have them supporting us because every little bit helps. All the milk that can go into ice cream or cheese or fluid milk, it is all going to help.”

The two entrepreneurs have a long list of customers and several events coming up to sell their ice cream treats.  Cook uses a custom trailer to dish out her ice cream at these various events around the state while Williams has invested in an ice cream truck to travel to his customers, even though he has to get a parent to do the driving. He has another year to wait until he can drive on his own!