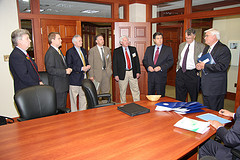 The Kentucky Farm Bureau (KFB) Board of Directors met with candidates for Agriculture Commissioner on April 20 to discuss positions on issues affecting the state’s agriculture industry. Democrats Bob Farmer, Stewart Gritton, John Lackey and B.D. Wilson and Republicans James R. Comer and Rob Rothenburger fielded questions from the KFB leaders and explained their priorities during the two-hour “Measure the Candidates” forum at the farm organization’s state office.

KFB President Mark Haney said the meeting gave the organization’s leadership an opportunity to get better acquainted with the candidates while gauging the respective qualifications and goals.

“The Commissioner plays a key role in the promotion of Kentucky agriculture plus oversees the Department of Agriculture, which administers a wide variety of programs beneficial to farm families and consumers,” Haney said. “Farm Bureau has a longstanding policy supporting adequate funding and effective administration of the department. We understand and appreciate the department’s mission.”

The candidates gave opening and closing statements plus responded to three questions relative to their vision for the Department of Agriculture and Kentucky agriculture. Following are capsules from their statements:

James Comer: A six-term State Representative and farmer from Monroe County, Comer cited four priorities: (1) expanding markets; (2) enhancing rural development; (3) budget transparency; and (4) expanding the “Kentucky Proud” program. He reminded the group that he has been active with Farm Bureau since he was a teenager, competing in the organization’s youth programs. He also served on the Monroe County FB Board of Directors. “I can be a well-spoken advocate for agriculture,” he said. He vowed to put the department’s fiscal records on the web.

Bob Farmer: The Louisville businessman said “this is not about who’s the best farmer – but who’s the best for the farmers.” He cited his experience in marketing for a Louisville bank and as owner of an advertising agency, along with 11 years as the national spokesperson for the Farmer’s Almanac. Promising to make advocacy his top priority, Farmer said: “I think I’m the best person to tell agriculture’s story. I will be the chief spokesman for agriculture.”

Stewart Gritton: An Anderson County farmer who is retired from the Agriculture Department’s Division of Shows and Fairs, Gritton also emphasized the importance of marketing and advocacy on behalf of Kentucky agriculture. While acknowledging the importance of the department’s many regulatory programs, he said “the part I think is the most important is marketing.” He noted he was raised on a dairy farm and has vast experience with Farm Bureau through the organization in Anderson County. He also voiced strong support for the County Fairs program and various livestock shows handled by the Shows and Fairs Division. “I want to advocate for the farmers of Kentucky,” he said.

John Lackey: The Madison County attorney and farmer said his approach to the job would be to focus on “a lot of little areas where we can fine-tune things … find a niche.” He informed the KFB leaders that he operates a 572-acre cattle farm and is a 43-year member of Farm Bureau. He said he’d like to strengthen partnerships between farmers and agribusinesses and strongly favors cooperative efforts. He began his final remarks by describing himself as “a little bit different” with a straight-talking, no-nonsense approach. “You need an articulate, hard-driving person,” he said. He also noted having worked closely with KFB when he served as a State Senator in the 1970s.

Rob Rothenburger: The Shelby County Judge-Executive and longtime farmer said he was the best candidate for the post because of a lifetime involvement with agriculture and experience as a government executive. He said his work as Shelbyville’s fire chief and as a registered paramedic also would serve him well as a farm safety advocate. Rothenburger has extensive Farm Bureau ties; his father was president of Shelby County FB plus he and other family members have served at the county level in both Shelby and Jefferson counties. “I’m a very well-rounded individual for this job,” he said of the ag commissioner post. Among the priorities he cited were consumer education and “bridging the gap between rural and urban citizens.”

B.D. Wilson: Wilson, who formerly farmed in Montgomery County and served 14 years as Montgomery County Judge-Executive, said he was the best man for the job due to more than 25 years in farming and extensive experience with government. He served three years in the Transportation Cabinet prior to launching his campaign. Top priority, he said, would be to make agriculture “the economic engine” of the state. He said he had extensive plans to create jobs in agriculture, particularly through the energy segment. He also voiced strong support for the equine industry, saying “it’s our number one industry … but it’s dying a slow death.”