The most recent Kentucky Farm Bureau (KFB) Marketbasket Survey indicates a slight decrease to the overall cost of food in the fourth quarter of 2018. However, the average marketbasket price showed an overall increase for the year, going from $115.07 in 2017 to $116.92 in 2018. The final 2018 survey is still lower than the final marketbasket of 2016 which was $118.87.

The Marketbasket Survey is taken four times per year at the end of each quarter to monitor overall and categorical trends in food prices across the Commonwealth. The survey gathers the prices of 40 basic food items throughout the state and then averages the numbers into six categories: beef, pork, poultry, dairy, fruits and vegetables, and grains. 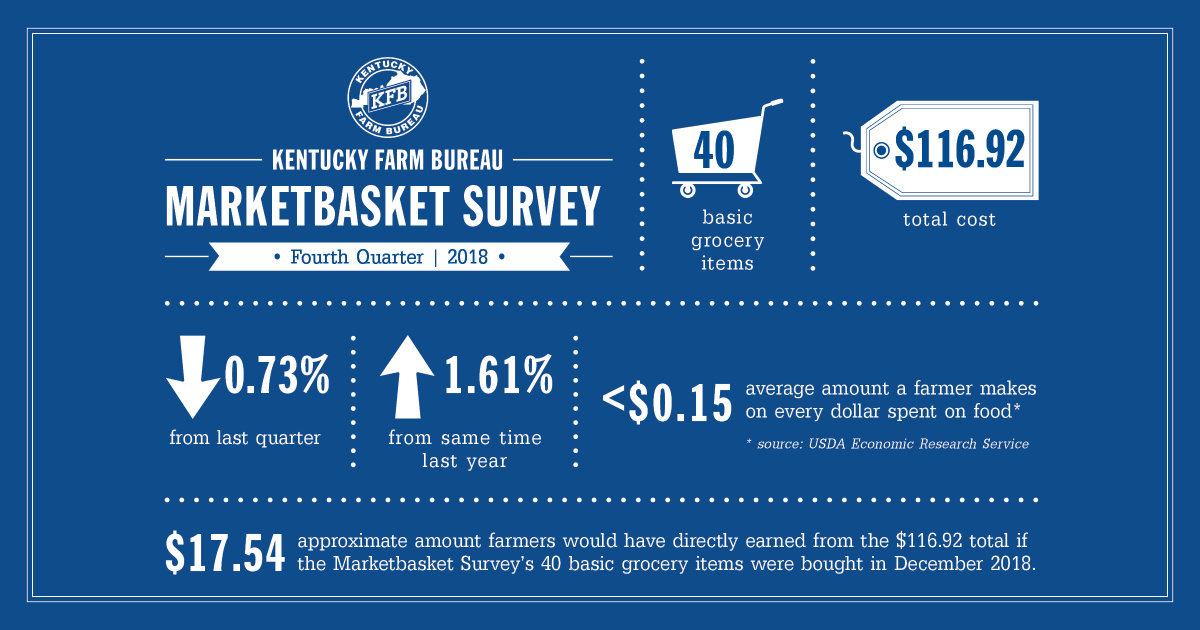 The average overall cost of food prices in the fourth quarter showed a decrease of .73 percent, or $0.86 from the previous quarter. The fourth quarter results make it the second consecutive quarter where overall food prices have decreased. These findings are a shift from initial expectations at the beginning of 2018, after the first and second quarters of the year indicated increases of 1.35 percent and 2.19 percent, respectively.

Like in Kentucky, the national findings from the latest Consumer Price Index report in November also indicate small fluctuations throughout the year, but an overall increase in food at home prices in 2018. According to the national report, the food at home index increased 0.2 percent in November after declining 0.2 percent in October. However, there was an overall increase of 0.4 percent for the food at home index over twelve months ending in November. The index for meats, poultry, fish, and eggs also rose 0.4 percent during the 12-month period. The index noted that the remaining major grocery store food group indexes declined during that time.

Fourth quarter prices of specific items and commodities remained a mixed bag with several items showing price decreases while others increased.  Most notably, the price of pork products decreased 4.91 percent, while beef costs increased for the sixth consecutive quarter.

While most changes weren’t as significant as those seen with pork and beef, the cost of grains declined by 2.76 percent, fruits and vegetables saw a price increase of 1.56 percent and poultry prices rose 2.32 percent during the fourth quarter.

Food price trends remained interesting to observe over the course of 2018. Despite an overall increase in the average marketbasket food prices for the year, the second consecutive decrease in food prices will be important to monitor moving into 2019.

Whether or not U.S. grocery prices fluctuate from one quarterly survey to the next, Kentuckians and all Americans continue to enjoy some of the lowest food prices in the world. Shoppers in the U.S. spend only about seven percent of their disposable income on food each year. Those costs remain far lower than any other country in the world thanks to many of the agricultural efficiencies utilized in America. Today the average U.S. farmer produces enough food and fiber to provide for about 154 people – a number that has continuously grown since 1940 when the average was 19 people per farmer.

Due to more food being produced on less land, the farmer’s share of the retail food dollar in America is down. According to the USDA’s Food Dollar Series, a farmer earns less than 15 cents per dollar spent on food, which is down significantly from the 31 cents earned in 1980 and is the lowest amount since the Food Dollar series began,