KFB Candid Conversation presents a discussion about the topical issues facing the agricultural industry and rural communities in a question and answer format. In this column, Kentucky Agriculture Commissioner Ryan Quarles discusses state agricultural issues as he prepares to serve a second term in office.

Congratulations on being re-elected. As you prepare for the next four years, what are some of the successes you saw during your first term?

I am honored the people of Kentucky entrusted me with a second term as Kentucky’s Commissioner of Agriculture. The Department’s successes include:

What I am most proud of is that we did all of this and more with a positive, unifying message: that at the end of the day, good farm or ag policy is not about being a Republican or a Democrat, it’s about what’s best for our farmers. 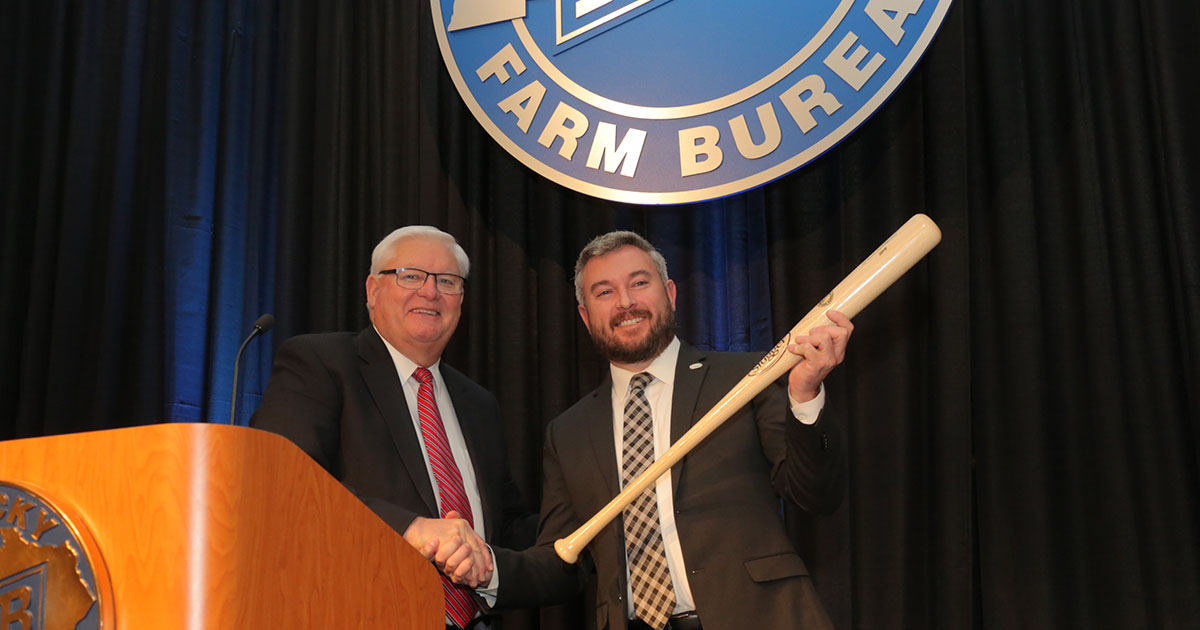 In looking forward, what are some of the issues you expect to take on during the next term?

During the campaign season, I traveled to all 120 counties, put the tailgate down on many farm trucks, and listened to the concerns of Kentucky farm families. I heard you all loud and clear, and we’re going to continue speaking up for rural Kentucky for the next four years.

A major priority in the second term will be the expansion of international trade. Unfair retaliatory tariffs from foreign countries have targeted America’s heartland and our agricultural producers. While President Trump and his administration have provided a trade mitigation program to reduce the impact, I know that our farmers want trade, not aid. We will not sit still while trade negotiations with China and other nations play out. We will stand up and urge countries around the world to look to Kentucky when buying ag products.

Additionally, we will continue to hold a discussion about ag tech and Kentucky. With the advent of the AppHarvest mega-greenhouse in Morehead, the University of Kentucky’s ongoing research, and the presence of Alltech in our backyard, there is a movement growing in our state that is creating 21st century agricultural technology jobs that have the ability to draw young people into our industry and make our farmers’ jobs easier.

What do you see as some of the biggest challenges farm families are facing today?

Depressed farm income and low commodity prices are definitely at the top of our list of challenges. So we’ve got to increase demand for the supply of products out there and we can do that by increasing markets. Another big obstacle for Kentucky’s farm families is rural connectivity. Due to the lack of connectivity, too many of our farmers cannot compete in the marketplace. This problem goes beyond buying and selling goods; it’s an educational issue as well. Too many of our rural kids can’t do their homework because of lack of reliable high-speed internet. It’s time to solve this problem once and for all. I went to the White House last year at President Trump’s invitation for a roundtable discussion about rural infrastructure. While the farm bill included some money for rural infrastructure, we need to encourage Congress to do more in this area.

Kentucky is emerging as the epicenter of the nation’s hemp industry, and we look forward to another year of growth and progress in 2020 as we work to build an industry that connects the Commonwealth’s past to its future. Kentucky is recognized nationally as a leader in the local food movement, driven in no small part by Kentucky Proud, and we will continue to help Kentucky farmers and food producers find markets for their products.

You have been very involved at the national level. Any thoughts on what issues need the most from an advocacy standpoint?

The greatest single action that Congress can take this year is to ratify USMCA. As I write this, it has been more than a year since the United States, Mexico, and Canada agreed to the trade deal. It is beyond time that our leaders in Washington, D.C. passed this deal. USMCA maintains near-tariff-free trade access for American agriculture and secured expanded access for dairy and poultry. Nearly everyone believes Congress will eventually ratify the deal. It is a shame Congress cannot get their act together, put partisan politics aside, and give trade certainty to not only farmers, but businesses across our state and nation.

Farm Bureau and Ryan Quarles have such a great relationship. What would you say to our members as you begin this next term?

Not a day goes by at the Kentucky Department of Agriculture that we do not interact with Kentucky Farm Bureau. As your Commissioner, I promise to continue working with Farm Bureau and its members for the next four years just as I did for the last four. I look forward to our continued partnership as we deliver solutions for the more than 75,000 farm families in the Commonwealth of Kentucky.