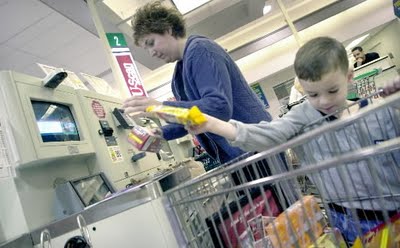 The latest Marketbasket Survey, conducted by the Kentucky Farm Bureau Federation in March 2011, indicates that average retail food prices made noticeable increases in supermarkets across the state during the first quarter of the year.

Thirty of the 40 items on the list experienced increases in average price, thus pushing the overall Marketbasket price higher.

The Marketbasket survey’s top five average price increases reported for items in the first quarter of 2011 were:

The Marketbasket survey’s top five average price decreases reported for items in the first quarter of 2011 were: The U.S. Department of Agriculture estimates that Americans spend approximately 10 percent of their disposable income on food each year. Of that money, 58 percent is used to purchase food that is eaten at home and 42 percent is for food eaten away from home (mainly at restaurants).

Kentucky is far from alone in the retail food price changes. Based on the U.S. Department of Labor’s Bureau of Labor Statistics’ most recent Consumer Price Index data released in mid-March (which reflects figures through February 2011), food prices at the national level have increased by 2.8 percent during the last 12 months. All six of the food categories monitored by the bureau reflect price increases over this span. However, as energy and transportation prices must also be factored into the total cost of food production, it is also important to note that the Bureau of Labor Statistics reports energy costs increasing 9.8 percent in the previous three months (December-February) and gasoline prices increasing by 19.2 percent during the last 12 months.

Despite the recent rise in retail food prices experienced nationwide, Americans continue to enjoy some of the lowest food prices in the world – thanks in large part to agricultural efficiencies. The U.S. farmer produces enough food and fiber today to provide for 155 people. In 1980 each farmer only produced enough food and fiber for 115 people, and that output drops to just 19 people when looking back to 1940. Yet while farming productivity is up, the farmer’s share of the retail food dollar in America is down. A farmer earns approximately 19 cents per dollar spent on food, down significantly from the 31 cents earned as recently as 1980.