Louisville, KY (July 16, 2013) – The latest Marketbasket Survey, conducted by the Kentucky Farm Bureau Federation in June 2013, indicates that average retail food prices in supermarkets across the state decreased noticeably during the second quarter of the year. According to the survey, the total cost of 40 basic grocery items was $112.70. This total reflects a decrease of $3.57, or 3.1 percent, from the same list of items reported in the previous quarter. 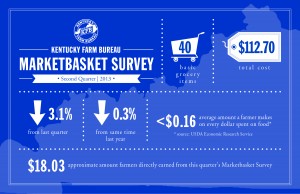 The Marketbasket Survey’s most recent retail food price results fared better than the U.S. Department of Labor’s Bureau of Labor Statistics’ Consumer Price Index (CPI) data that was also released earlier today (reflecting figures through June 2013). The CPI data revealed that food-at-home prices increased nationally by 0.2 percent in the last reported month (though prices were reported with decreases in two of the last four months). Overall, the national average price for food at home has grown by a total of 0.9 percent over the past 12 months. Today’s Marketbasket Survey total reflects a 0.3 percent decrease over the average price reported in the second quarter of 2012.

For the first time in more than five years, all six of the food groups recorded in Kentucky Farm Bureau’s Marketbasket Survey – beef, dairy, fruits and vegetables, grain, pork, and poultry – simultaneously experienced a decrease in average price. The dairy category showed the greatest total decrease with an overall average price drop of 6.0 percent ($1.45). Half-gallon vanilla ice cream had the greatest single-item decrease with an average price drop of $0.62. Among the few products that did experience an increase in average price in this survey, the highest single item was tomatoes, climbing an average of $0.24 per pound. Overall, 28 of the 40 items in the Marketbasket Survey experienced decreases in average price, 10 increased and two items (corn oil and vegetable oil) were unchanged.

The Marketbasket Survey’s top three average price decreases reported for items in the second quarter of 2013 were:

The Marketbasket Survey’s top three average price increases reported for items in the second quarter of 2013 were:

Whether or not grocery prices fluctuate from quarter to quarter, it remains a fact that Americans continue to enjoy some of the lowest food prices in the world. Shoppers in the U.S. spend only about 10 percent of their disposable income on food each year. Those costs remain far lower than any other country in the world thanks to many of the agricultural efficiencies utilized in America. Today the average U.S. farmer produces enough food and fiber to provide for about 154 people – a dramatic jump from an average of 19 people per farmer back in 1940.