Posted on Jul 17, 2014
Louisville, KY (July 16, 2014) – Average retail food prices in supermarkets across the state made a small but steady climb in the second quarter of the year according to the latest Marketbasket Survey, conducted by the Kentucky Farm Bureau (KFB) Federation in June 2014. The total cost of the survey’s 40 basic grocery items was $122.23. These results were $1.53, or 1.3 percent, higher than the same list of items reported last quarter, the previous record high, and represent an overall 1.8 percent increase in grocery prices so far this year. 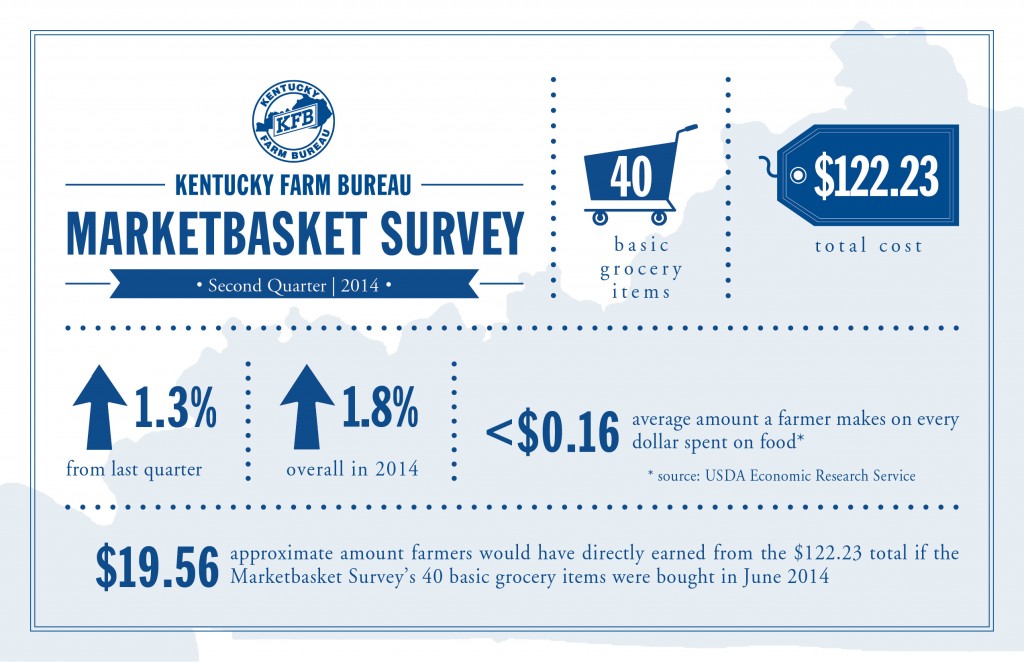 At the same time, national food price trends reported in the U.S. Bureau of Labor Statistics’ Consumer Price Index (CPI) reveal that food-at-home prices have increased each month of this year. The CPI data shows national prices for food-at-home increasing by a total of 2.2 percent during the first five months of 2014.

In Kentucky, the Marketbasket Survey results show grocery prices increasing by a total of 1.8 percent in 2014, trending steadily toward the overall 2.5 to 3.5 percent increase in food prices that the United States Department of Agriculture (USDA) forecast for the year.

Of the six food groups recorded in the most recent survey – beef, pork, poultry, dairy, grains, and fruits and vegetables – the pork category showed the largest total increase with an average price jump of 8.2 percent (+$1.52). When compared to the previous quarter, the poultry category made the greatest decrease in average price at -2.2 percent (-$0.22). Overall, 22 of the 40 items recorded in this survey experienced increases in average price during the second quarter. The average price of two items – chicken breasts and all-purpose flour – were unchanged.

The Marketbasket Survey’s top three average price increases reported for items in the second quarter of 2014 were:

Whether or not grocery prices fluctuate from one survey to the next, Kentuckians and all Americans continue to enjoy some of the lowest food prices in the world. Shoppers in the U.S. spend only about 10 percent of their disposable income on food each year. Those costs remain far lower than any other country in the world thanks to many of the agricultural efficiencies utilized in America. Today the average U.S. farmer produces enough food and fiber to provide for about 154 people – a significant jump from an average of 19 people per farmer back in 1940.