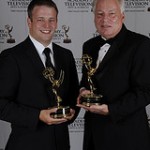 Louisville, KY (July 31, 2012) – Bluegrass & Backroads, a 30-minute television program that explores the agricultural, cultural, historical and artistic stories unique to the state, was honored with an Emmy® Award by the National Academy of Television Arts and Sciences. Bob Shrader and Matt Hilton, producers and hosts of the show, attended the 48th Annual Ohio Valley Regional Emmy® Awards to accept the award for Best Magazine Feature/Segment. Winners of the coveted Emmy® Awards were revealed on July 28th during a black-tie dinner held at Belterra Casino, Resort and Spa in Florence, Indiana.

The Emmy® Award-winning segment focused on Cramer Schneider, a Kentucky teenager who did not allow the physical limitations of being blind prevent him from showing award-winning cattle.

“I am so glad that it was this story that won the Emmy. Cramer Schneider set a goal much higher than the Emmys for us in sharing his story,” said Shrader. “I would like to thank the Schneider family for letting us come into their lives with cameras and interview questions. This is what makes me feel good about my job; when I can share positive stories that might otherwise go unnoticed.”

“This recognition means a lot for the show. It proves that stories about Kentucky's farm families can touch a wide audience as well as get critical acclaim,” said Hilton. “Bob and I put many hours of work into Bluegrass & Backroads so it is nice to be given such a prestigious award.”

Including this year’s four nominations, Bluegrass & Backroads has now been nominated for a total of seven Emmy® Awards over the show’s history. In 2009, the program also won two Emmys® – one for Best Magazine and one for Best Photography.

Bluegrass & Backroads is a weekly program aired regionally on the Kentucky Educational Television (KET) networks, and nationally via satellite on RFD-TV through Dish Network, DirecTV and several major cable outlets. For a complete list of the stations and schedule on which Bluegrass & Backroads airs, or to view the Emmy®-nominated segments and other episodes streaming online, visit bluegrassandbackroads.com.