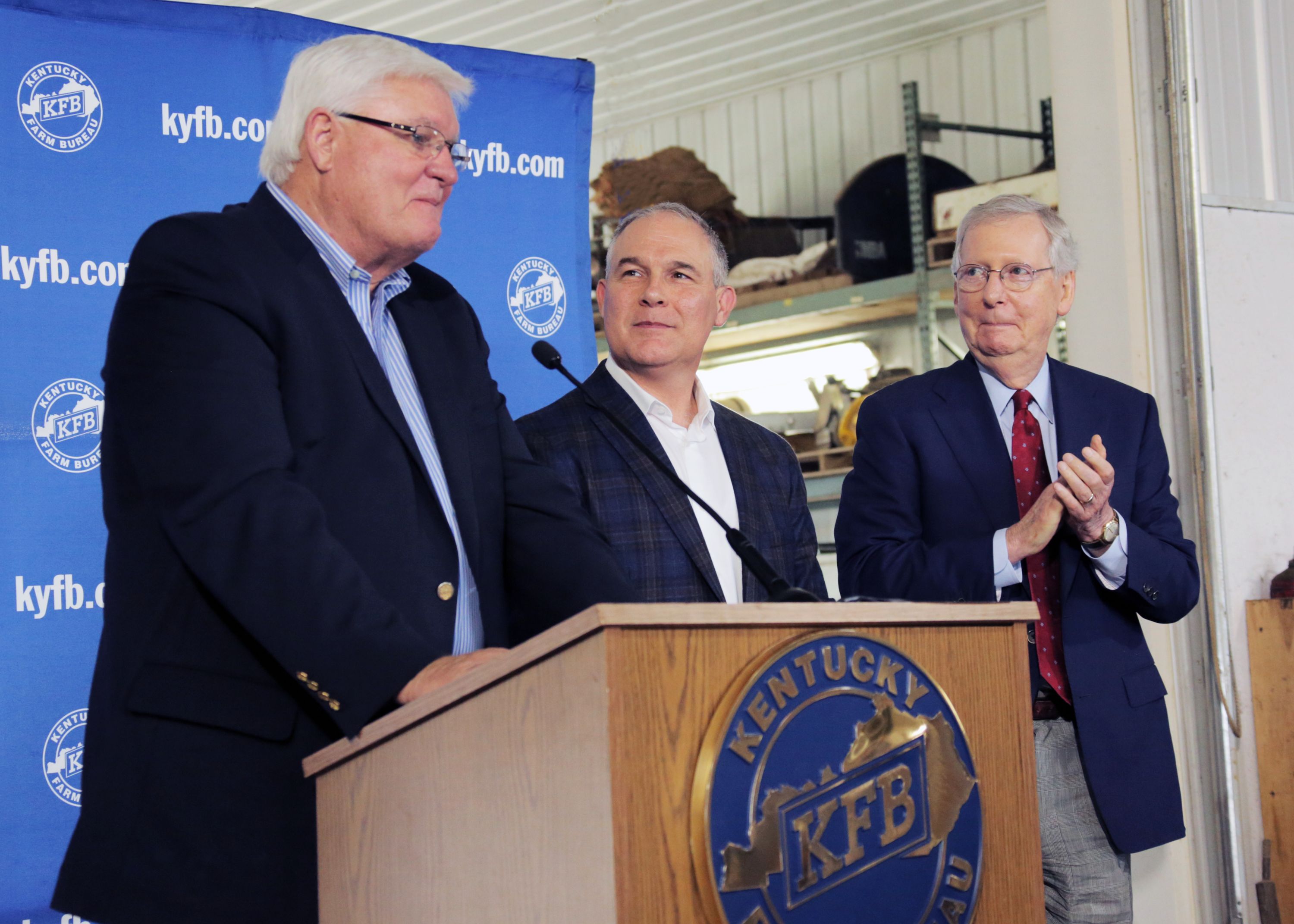 It is rare that an organization would have an opportunity to hear from a sitting governor, a Senate majority leader and an administrator with the Environmental Protection Agency (EPA), within the span of a week. But KFB members experienced just that as Governor Matt Bevin paid a visit to the KFB Board during their most recent meeting. Three days later, more than 300 KFB members, local officials and legislators from across the state heard from Senator Mitch McConnell and EPA Administrator Scott Pruitt at a meeting in Bourbon County on Mahan Farms.

Both McConnell and Pruitt spoke to the issues that are facing farm families and spent much of their time answering questions and listening to what members had to say.

KFB President Mark Haney said such an occurrence is indicative of current leadership who want to hear from constituents, and an organization that is highly involved and recognized for its engagement with local, state and national leaders to discuss topics that affect their members’ farms, their families, and their rural way of life. 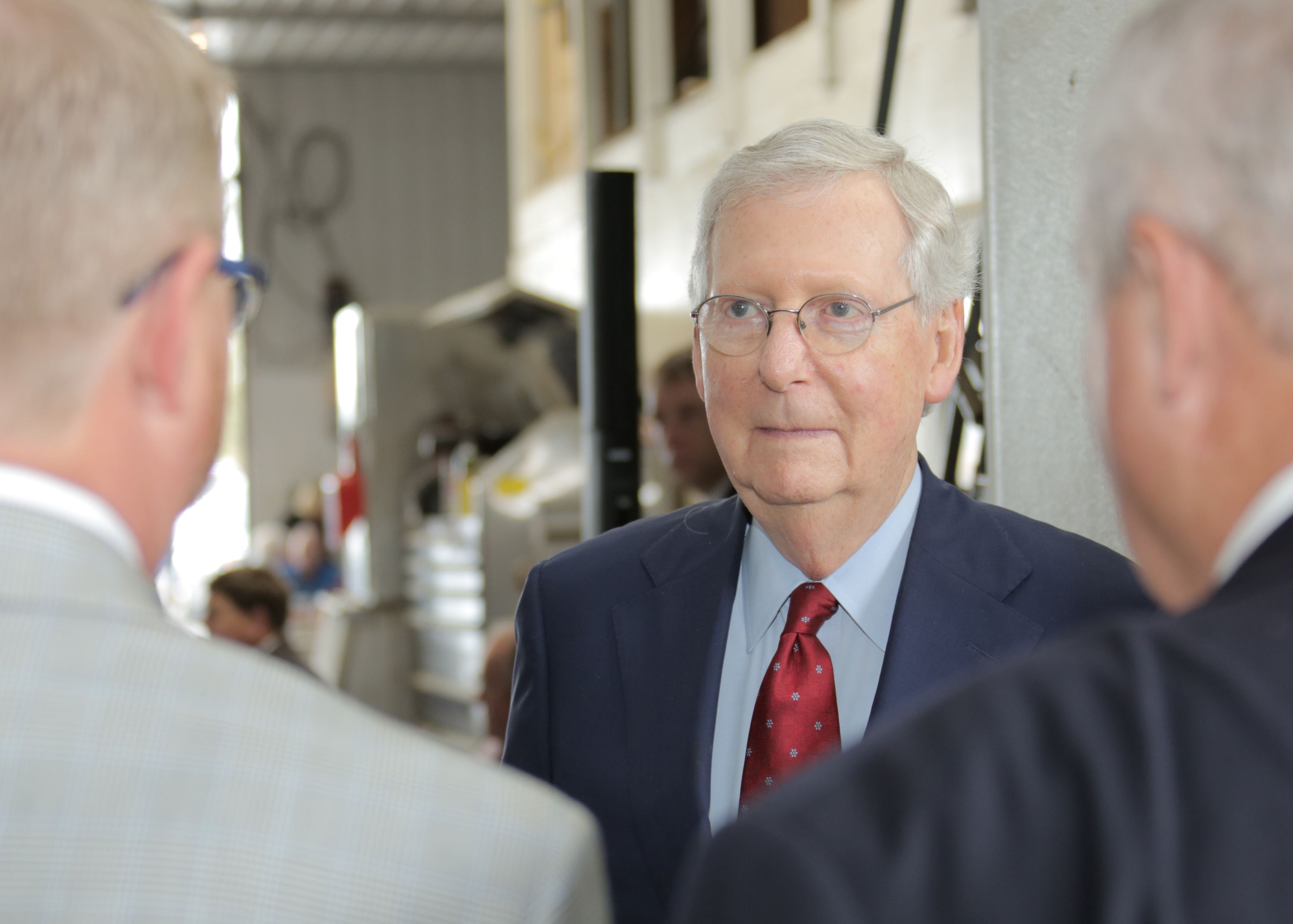 “Being able to meet face to face with these high level officials speaks well to the efforts they are making to hear what we have to say as an organization, while giving us the opportunity to get our message out to these leaders,” he said. “This demonstrates how effective our grassroots approach is to issues facing our agriculture industry. We get our policy from this grassroots advocacy and take pride in our efforts to be engaged in conversations with these leaders.”

Haney added that whether on the state or national levels, when Farm Bureau members show up, they are speaking with a collective voice on the issues that are affecting them.

During his visit, McConnell first thanked the Mahan Family for allowing the meeting to take place on their farm and emphasized how Kentucky is still a place that is primarily made up of rural communities.

“Mark Haney, you and the entire Farm Bureau team do such a fabulous job of representing all of us in our state because we are still one of the state’s that’s mostly rural and small town, which is becoming increasing unusual in our country,” he said. “But we are still one of those states anchored in rural areas.” 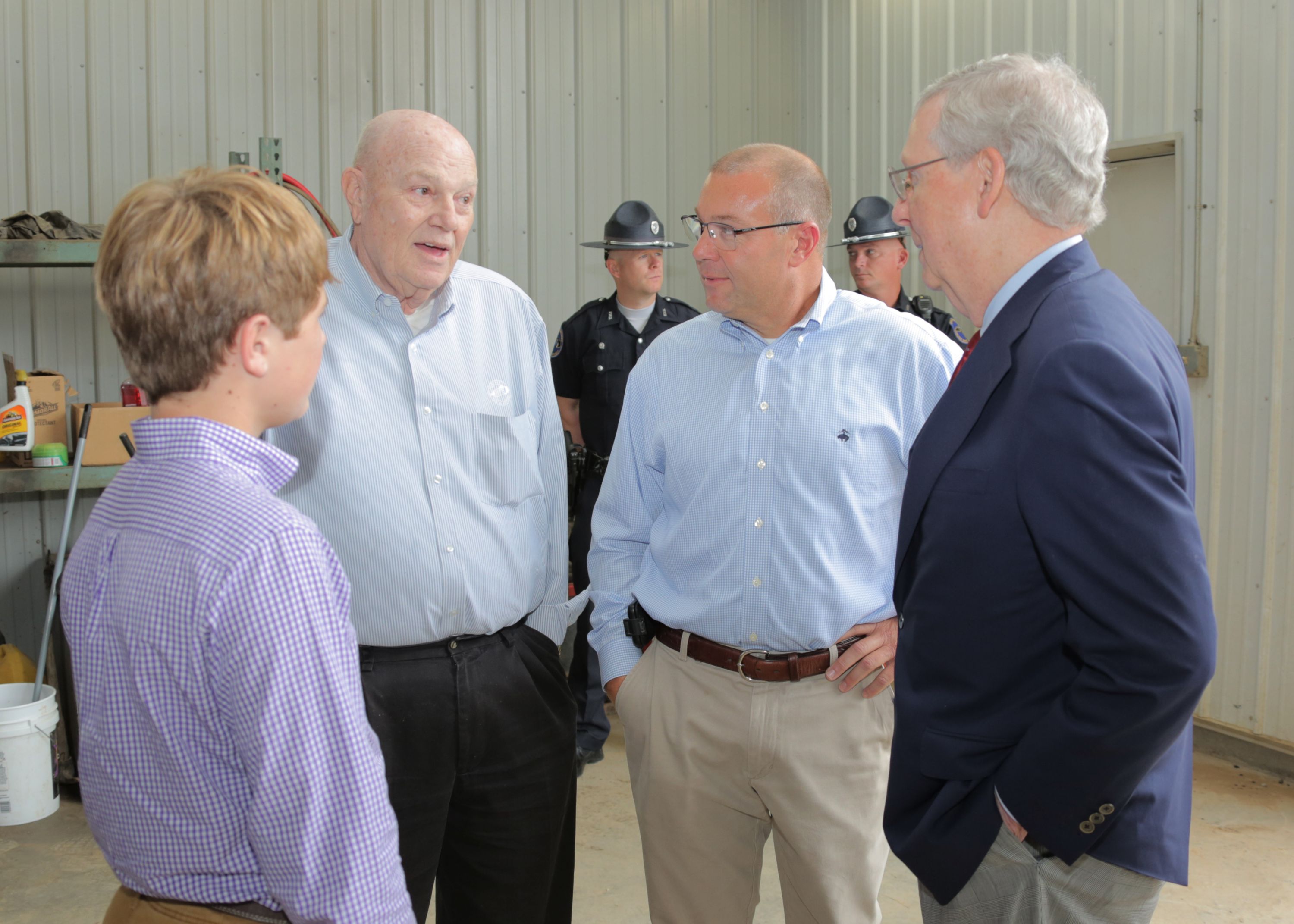 From an issues standpoint, McConnell noted that with coupling coming tax reform legislation and regulatory rationality, America can live up to its potential.

In referring to Pruitt, McConnell said he had tried for eight years to get the EPA director to come to Kentucky, something that did not happen until the current Administrator, a Kentucky native himself, was appointed. When introducing him, McConnell said of Pruitt, “he’s got courage, he’s got guts, and he’s got smarts.”

Upon taking the podium, Pruitt said the agency is in the process of repealing the Waters of the U.S. (WOTUS) rule, which drew a large applause from the crowd.

“You know that rule well. The 2015 (WOTUS) rule truly sent shock waves across this country. Let me tell you something, we are on the path to get rid of that,” he said.

Pruitt added that with the repeal will also begin a process to redefine the rule and doing so in a way that will inform farmers of exactly what is contained in the regulation.

“We’ve heard from Farm Bureaus all over the country with respect to this issue…so I’m hopeful it’s something you can provide us (with) insight and information,” he said. “We’ve been working with Governor Bevin, who has been a great help to us, as well as his Cabinet and I really feel good about where we are with WOTUS.”

In talking about the value of being a part of the meeting in Bourbon County, Pruitt said it was a blessing. 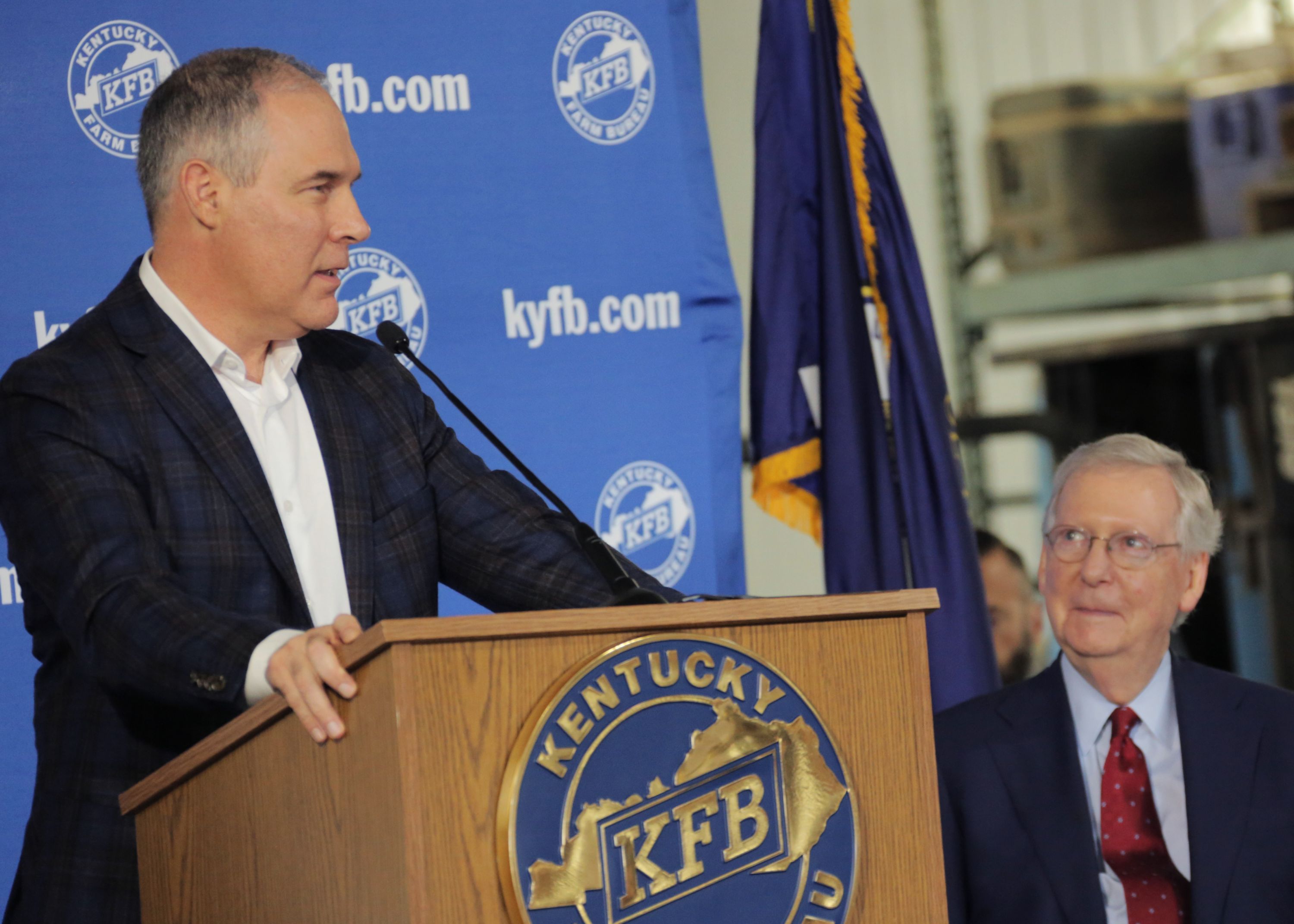 “It’s a blessing actually to be in these kinds of meetings because we spend a lot of time, across the country, meeting with stakeholders, farmers and ranchers, and hearing from them,” he said. “These things matter to me a great deal to make sure we’re able to do our job and do it well.”

During Governor Bevin’s visit with KFB Board members, he emphasized he is trying to move this state forward; to make it everything he knows it is. Bevin spoke on a number of subjects including the state’s pension fund but he relayed to board members more than anything, how great this state is and how much better it can become through progressive initiatives.

“My vision for the state is to make Kentucky the engineering and manufacturing hub of American. But you all are in the engineering and manufacturing business every day,” said Bevin.  “Look at how technology has changed your industry with GPS, wiring systems and automation, among other things. And we will get this accomplished. I want this to be a place where any one of our children could pursue whatever they want to do in the ag community or the tech community or anything else.”

The Governor also took questions from the board members during his stop at the KFB State Office Building. KFB Executive Vice President David Beck said it is this one-on-one interaction with members that not only allows the Governor and other officials an opportunity to hear about issues that face farm families but it demonstrates the organization’s ability to advocate effectively.

“Our Farm Bureau members are not shy when it comes to asking questions and voicing their opinions on the issues they face every day on the farm and in their rural communities,” he said. “And each year, as we develop our priority issues, these members look forward to working with their local, state and national leaders to make these priorities known, heard and acted upon. We are fortunate to have many elected officials in office, including Governor Bevin, Administrator Pruitt and Senator McConnell who will listen and meet us where we live and work to help move our industry and our state forward.”