Louisville, KY (March 4, 2016) –Scores of Kentucky Farm Bureau (KFB) members made their way to Frankfort this week to meet with their state legislators during the KFB Legislative Drive-In/Food Check-Out Day.

Traditionally the event has taken place on two separate days; one reserved as an opportunity for KFB members to inform their respective legislators of the organization’s priority issues and any legislation they support; the other as a time to bring awareness to food costs in the state and across the country.

This year marked the first time the two long-time events were held on the same day. 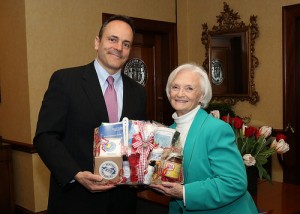 “This event is one of the single most important days of the year for our members as they meet with their legislators to discuss priority issues, current legislation and ag-related topics that affect them on a daily basis,” said KFB President Mark Haney. “It also allows our members to deliver food baskets to their lawmakers as a way to showcase locally produced goods and the affordability of our food supply, the least expensive and safest in the world.”

The USDA’s Economic Research Service estimates that Americans, on average, spend about 10 percent of their incomes on food each year which means it would take seven weeks to earn enough money to pay for a year’s supply of food.

As they made their way to the various legislative offices, members discussed several priorities approved at last December’s annual meeting including maintaining the 50 percent allocation of the Master Settlement Agreement funds that are reinvested in Kentucky agriculture, the support of an efficient, well-administered and adequately financed Kentucky Department of Agriculture, and support of the Grain Center of Excellence at the University of Kentucky Research and Education Center at Princeton, to name a few.

Members also discussed their support of the newly filed HB 529, legislation that will improve coordination among all interested parties involved in the Commonwealth's water resources planning, management, and development.

The legislation will promote economic development opportunities through the strategic and efficient use of water resources by ensuring a long-term adequate supply of on-farm water resources for agriculture, thus alleviating pressure on rural and urban water supplies.

Haney has discussed the necessity for such legislation over the past few months and said there is a need for a drought mitigation plan here in Kentucky that is specific to agriculture.

“There needs to be an entity put in place to be able to manage and advocate for water structures here in Kentucky whether it is community-type or individual water structures on the farm,” he said.

Last year, a Water Management Working Group was formed by KFB to specifically address water issues. Haney noted that as water continues to be an issue, the work this task force has completed and will complete is vital to the success of agriculture in Kentucky.

Rep. Rick Rand (D- District 47) and Rep. Steven Rudy (R District 1) are serving as the main sponsors of the bill. Both legislators visited with some of their constituents who were participating in the Legislative Drive-In/Food Check-Out Day event.

Rand, who chairs the House Appropriations and Revenue Committee, which oversees the state budget, said this legislation was a perfect example of how well the grassroots approach of bringing forth issues to lawmakers works. He also noted how small farms are really a network of small businesses.

Rand added that one of his duties is to work with the Agriculture Development Funds which go through the budget.

“I think the Ag Development dollars have probably changed the face of agriculture in Kentucky even more than I could have dreamed,” he said. “We work very hard to make sure those dollars continue to flow back to our local communities so we can diversify and support the important agricultural programs that help our economies at the state and local levels.”

“The last census in Kentucky was the first that noted there were more people living in the cities than out in the country,” he said. “But agriculture, which is going to have to feed not just Kentucky but the world, is so vital and it’s incumbent among us as legislators who represent the rural areas to make sure the urban legislators understand that importance.”

Rudy added that HB 529 is an example of that as the legislation passed unanimously out of the House Agriculture and Small Business Committee, which is comprised of representatives from both rural and urban areas.