Posted on Sep 9, 2013
With the overwhelming popularity of smartphones, tablets and other mobile technologies easily placing real-time information in the palm of any user’s hand, Kentucky Farm Bureau (KFB) sought a way to provide members and non-members alike with quick access to pertinent agricultural news and resources – so it introduced an app. Initially launching an iOS mobile app at the end of 2012, KFB just expanded its mobile technology reach with an Android version available via Google play. 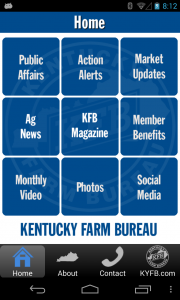 For nearly a century KFB has served the citizens of the Commonwealth as the “Voice of Kentucky Agriculture.” Though communication methods have changed dramatically since then, the organization is taking a leadership role in using mobile technology to keep Kentuckians well-informed about relevant agricultural and legislative news as it happens.