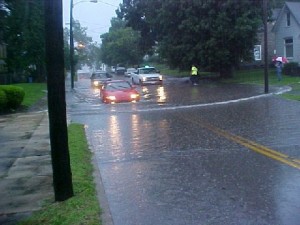 As rain sweeps across large portions of the state this week we are reminded that strong spring storms – and potential floods – are also on the way. According to the National Weather Service, flooding causes more damage in the United States than any other severe weather related event. Nearly 100 lives and an average of $5 billion in property are lost annually due to flooding. As such, Kentucky Farm Bureau (KFB) urges homeowners to evaluate the risk for storm damage on their property and take precautionary steps to lessen or eliminate the destructive effects of flooding.

KFB Insurance provides flood coverage through Southern Farm Bureau Insurance and the Federal Government’s flood insurance plan. Over the past five years, this plan has protected over 600 home- and farm-owners and paid out more than $9.8 million in claims to repair their property damages. Restoring these communities was a major concern last May as severe flooding washed through south central Kentucky, especially in Casey County. More than 285 claims and $6.25 million were tallied during 2010 alone. This coverage protects those in flood plains – areas prone to flooding often near rivers and creeks that rise.

KFB knows, however, that homes and farms are not the only sources of claims and property loss when it comes to water damage. During the past five years, KFB Insurance also paid out $6.3 million on nearly 870 automobile flood-related claims. A little more than $1.3 million and 210 auto claims were handled by KFB Insurance when widespread flooding hit Jefferson County in August 2009 after a single storm.

While KFB is proud to help so many Kentuckians recover after suffering through storm damage, restoring and replacing property is a hefty venture for those without flood insurance. Most home and farm policies do not automatically include coverage for flooding, so property owners must be aware of flood plains in relation to their homes. Home and farm owners should ask their agent about specifically adding flood coverage to their policies to avoid an expensive disaster when storm waters surge.

Even residents living in areas that are not prone to flooding can make small improvements around the home and farm to help prevent surface water damage, which is typically not covered under a standard insurance policy. Listed below are some helpful tips for making a property more water resistant:

Redirect downspouts away from the foundation of the home and extend the tubing to carry the water further away than the typical gutter system allows.

Keep all gutters and downspouts clear of debris that will cause the roof-lining troughs to fill with excess water, overflow and fall instead onto areas close to the foundation.

Reshape landscaping around the foundations to slope downward, directing water away from the house.

Caulk any cracks seen around the foundation that might allow seepage into a basement or crawlspace.

Unfinished basements walls can be sealed internally with specialty applications found at most home improvement stores, but may require continual review and maintenance over time.

Install a sump pump and foundation drain system to force water out of the area in and directly under a house.

Despite their best efforts, though, homeowners cannot always prevent water damage. For times like those, it is also wise to have copies of important documents and photos of your home, farm and other possessions on file somewhere off site, like a bank safety deposit box, for reference and insurance purposes if personal property is destroyed or washed away.

Of course, flooding can do much more than just damage property – floods occasionally claim lives, too. The National Weather Service points out that just six inches of water can sweep a person off of his or her feet, and that two feet of water is enough to lift and move a car, even an SUV. More people drown in their cars than anywhere else during a flood. If the water covering the road is more than a few inches deep, it is best to find an alternate route – even if it takes longer to reach the destination. What appears to be a short drive through rising waters could end up preventing more than just a person reaching the other side of the road – it could cost a life.

When storms hit Kentucky, it is important to follow news updates on the television or radio and pay attention to the warnings that are issued. As organizations like KFB support Flood Awareness Week (March 14-19) and Severe Weather Awareness Month (March), Kentuckians are also advised to create emergency plans and kits for situations like floods and other natural disasters. To learn more about how to start a plan and what to include in an emergency kit, visit ready.gov.