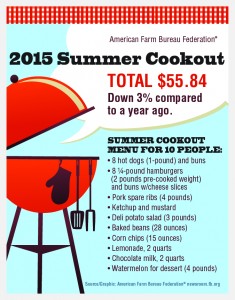 Farm Bureau’s informal survey reveals the average cost for a summer cookout for 10 is $55.84, or $5.58 per person. That’s about a 3-percent decrease compared to a year ago.

“Based on our survey, food prices overall appear to be fairly stable. Prices for beef have continued to increase this year, but prices for other meats are generally declining. Dairy product prices are also quite a bit lower,” said John Anderson, deputy chief economist at AFBF.

“Meat production is starting to increase substantially. Beef prices have started to stabilize but have not declined yet. On the other hand, retail pork prices have been declining all year,” Anderson said.

“Fuel and other energy prices have also generally been lower so far this year compared to last year,” Anderson said. “This helps keep prices down on the more processed items in the basket. Energy is an important component of the final price for these products.

“As a nation, we continue to enjoy a consistent, high-quality supply of meats and poultry at prices that are remarkably affordable for most consumers,” he said.

A total of 88 Farm Bureau members (volunteer shoppers) in 30 states checked retail prices for summer cookout foods at their local grocery stores for this informal survey.

AFBF is the nation’s largest general farm organization with member families in all 50 states and Puerto Rico. Learn more at http://facebook.com/AmericanFarmBureau or follow @FarmBureau on Twitter.