Kentucky’s drivers should brace themselves for the annual three-month increase in roadway encounters with the deer. The Insurance Institute for Highway Safety (IIHS) estimates that each year white-tailed deer cause car accidents across the nation that are responsible for tens of thousands of injuries and the deaths of approximately 200 Americans. Those collisions also carry the hefty price tag of $4.6 billion in insurance claims annually. 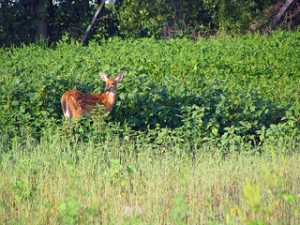 Vehicular collisions with deer increase during this time of year in conjunction with the annual peak season for deer migration and mating. Kentucky’s exploding deer population has only expanded the opportunities for these accidents to occur. Deer are also naturally on the move during this season, and urban sprawl has introduced many new roads into the natural habitats of these animals. Consequently, deer are seen and struck on the roadways during the last three months of the year almost more often than all the other nine months combined.

Kentucky State Police (KSP) data reports that Kentuckians were in a total of 2,766 automobile collisions with deer last year (32 fewer than in 2012), resulting in 132 injuries but no deaths. However, Kentucky Farm Bureau (KFB) Insurance claims data also shows that these collisions have clearly defined seasonal peaks. Approximately $21.2 million in deer collision claims were filed with KFB in 2013, but nearly 46% of those claims resulted from accidents occurring during October, November and December.

Further analysis of KFB Insurance claims data from the past five years shows that automobiles collided with deer on Kentucky roadways at a clip of 28.51 deer per 1,000 drivers during the month of November, well outpacing the national average of 14.1. As a result of those collisions, KFB Insurance customers filed more than $4.7 million in claims just during November of 2013.

“The numbers are certainly telling of the frequency of these accidents, but we have to keep in mind that behind those numbers are real people and real injuries,” said Greg Youngblood, KFB Insurance’s Vice President of Claims. “Our hope is that calling attention to the seasonal increase in deer collisions will increase driver awareness and reduce the number of incidents on Kentucky’s roads this fall.”

Now that the seasonal jump in deer activity is here, motorists should take the time to be aware of their surroundings even more than usual. KFB advises motorists to drive defensively on the roadways this fall, especially when headed through wooded areas where deer are likely to be seen.