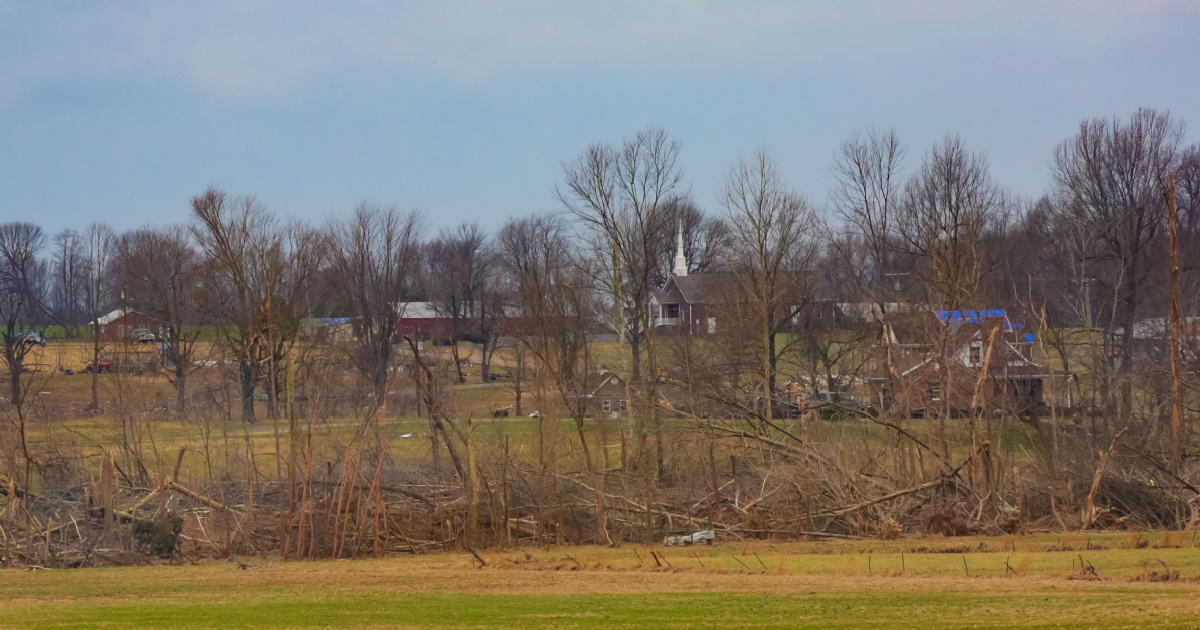 In the late evening hours of Dec. 10, severe storms and four separate tornadoes touched down, killing 78 Kentuckians and leaving a widespread trail of devastation. The largest and most destructive tornado, which stayed on the ground to demolish anything in its path for more than 200 miles, originated in Arkansas, according to the Kentucky Division of Emergency Management. It touched down in Missouri and Tennessee and then made its way into the Bluegrass State, where it ripped through the western half of the state before finally weakening in central Kentucky.

As crews began the cleanup and restoration process in mid-December, Kentucky authorities said the sheer level of destruction was hindering their ability to tally the damage. The destruction was significant for Kentuckians—including KFB members to KFB employees, agents, CSRs, and volunteer leaders—leaving many with devastating losses.

The morning following the storm, KFB’s leadership hit the road early to visit impacted areas in Western Kentucky. On Sunday, as they surveyed damage in the hard-hit town of Bremen, Ky., they met with KFB member Danny Miller, a farmer who lost everything to the tornado, including his brother and sister-in-law, his home, multiple barns, and more than 30 cows.

John Sparrow, KFB Insurance’s Executive Vice President and CEO, and other members of KFB’s leadership promised members like Miller that KFB Insurance would help them pick up the pieces and begin again.

“We’re here to deliver a promise, so we’re going to do that with compassion first,” Sparrow said.

This weather event was the deadliest tornado to ever cross the state.

“In my 27-year career here at Kentucky Farm Bureau, this one’s going to stand up there at the top,” said Rob Payne, VP of Claims for KFB Insurance.

The second deadliest storm in Kentucky’s history was recorded in March 1890, when a tornado ravaged community in the Louisville area. The damage amounted to about $2.5 million in 1890 dollars, or more than ~$7.6 billion today. Seventy-six people were killed in that storm.

ALL HANDS ON DECK

In the wake of the devastation, the KFB family has collectively stepped up to deliver on the promise.

“Our employees and agents and volunteer leaders have rushed toward the hurt and the needs and the destruction with gusto, and Kentucky is taking note,” Sparrow said. “Whether you are working phones, inputting claims, meeting with heartbroken members, assisting with cleanup, or helping carry the load for others so they can be on the front lines, your effort has been amazing and I am so thankful for how each of you have embraced your roles.”

Claim adjusters in the hard-hit areas of the Bowling Green, Hopkinsville, and Mayfield Regional Offices are working overtime to deliver timely and compassionate customer service to members.

Within days of the storms touching down, more than 20 KFB retirees and dozens of adjusters from other companies arrived on scene to help with claims. Those companies included ALFA Insurance, Colonial Claims, and Farm Bureau folks from Arkansas, Georgia, Indiana, Iowa, North Carolina, and Texas.