Harrison County Students Get a Taste of the Farm


CYNTHIANA- For more than 15 years, Harrison County FFA members and agriculture students have had the opportunity to gain hands-on experience thanks to the access they have to a school-owned farm located next to the high school and middle school properties.

The students raise a variety of livestock on the facility including cattle. To compliment the farm, the high school also has its own greenhouse where different flowers and plants are raised conventionally while a hydroponic system is used to grow lettuce.

To celebrate local food and to showcase what these young farmers are doing on the farm, all students at both schools were rewarded with a local food day in which they were served hamburgers that were processed from the farm’s cattle herd and topped with lettuce grown in the greenhouse.

The burgers were grilled with the help of local ag and Farm Bureau leaders while FFA members shuttled the finished product to the cafeterias. High School FFA officers also spoke to each group as they entered their respective cafeterias to hear about the meal and about the goodness of local food and knowing its origins.

Savannah Robin, one of the two ag teachers at Harrison County High School, said the entire project of bringing food from the farm to the students was student driven.

“What I love about the kids in this community is, they’re hungry for success and their hungry for projects like this one, and they took a lot of initiative in getting this established,” she said. “The things we teach and what we do at the farm are driven by what classes we teach and what projects students want.”

A strong desire to promote local food by ag students, and because many of them are involved in beef production, helped to spark this idea. This most recent “burger day” was a first for students and the second year beef from the school farm was processed. Robin, who also serves as the Bourbon County Farm Bureau President, said they learned a lot going through this process especially in judging just how much beef would be needed to feed all those students.

“This year we sat down with our food service directors and our staff to ask what they needed from us, and so we’ve been planning this for months in order to make it all happen,” she said.

A big part in making it happen was to make sure the beef being produced was the best it could be. Through their classroom experience, the ag students at both the middle school and high school levels, learn a variety of elements connected to the farm and its animals including high level nutrition, correct feed rations, and proper protein percentages, to name a few.

In learning these things in the classroom, they can move that knowledge to the farm and see firsthand the results. 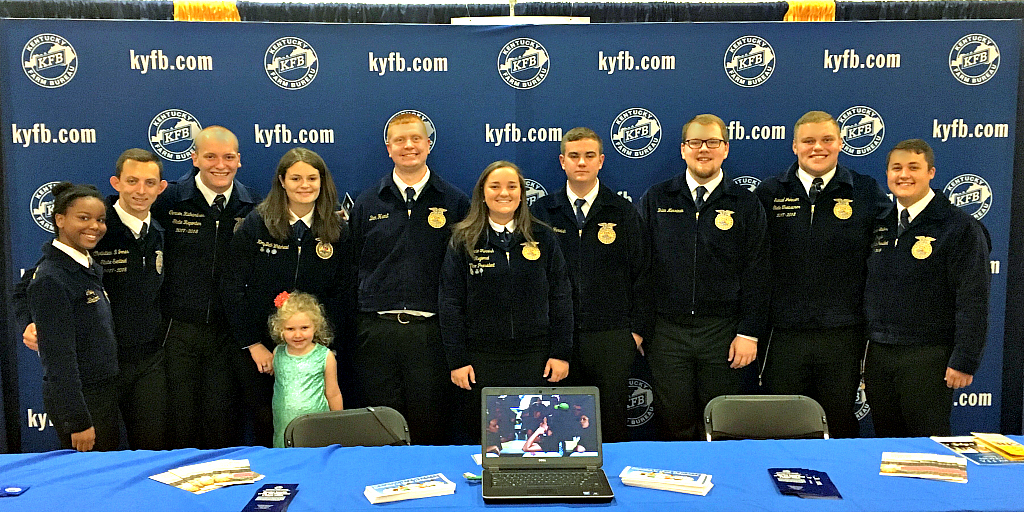 Haley Fauste, who serves as the high school FFA chapter’s sentinel, said as is the case for most cattle farms that sell directly to consumers, the students learn about processing part of the operation.

“The students at the farm take care of our steers, feed them and sometimes show them before they are processed, after two years, at a regional facility in Hazel Green (Wolfe County),” she said. “We then sell some of the beef or use it for the hamburgers that were used in our cafeterias.”

FFA chapter president Annie Furnish said the school farm, which is comprised of 80 acres, features more than just cattle as part of the farming operation.

“We also produce turkeys, have them processed and sell them around Thanksgiving, as well as crops such as corn for popcorn,” she said. “It is decided by the students each year as to what they want to grow so it is all very student led.”

Whitley Lemons, the FFA secretary, said many of the local students have questions about the farm and where their food comes from.

“As an example of that, we put on an ag literacy day at our school farm each year where first grade students visit to participate in a variety of activities and they always ask a lot of questions; they are very involved,” she said. “Many of these students are seeing farm animals for the first time and it’s amazing to see their eyes light up when they first see a horse or a cow.”

Kory Beth Whitehead, the FFA vice president, said she doesn’t think most people not associated with a farm know all that goes into caring for the animals and how much attention is given in getting food from the farm to their tables.

“I honestly don’t think they know how much effort it takes to actually make all this happen in getting that food to their plates,” she said. “But it is important that people understand where their food comes from.”

Brian Merriman, a senior student, serves as the hydroponics manager in the high school’s greenhouse. He said hydroponics is a growing craft creating a huge impact and being a part of the school’s agriculture program has been very rewarding.

“This is the first year we have had this manager’s position and actually my first year in FFA but it has opened up a whole new world for me,” he said. “My first love has been music but I see the possibility of a whole other career having been involved in this.”

Preparing for the next step

While the ag students in Harrison County are getting a real taste of life on the farm, they are also preparing themselves for the future whether they remain on the farm or in some other ag-related industry.

“I can attest to the fact these students are becoming college and career ready,” said Robin. “The projects they conduct, the writing they do, their level of thinking and their ability to problem solve very much lends to the success they will find after high school.”

Robin added that many of these students are producing at a college level and are treated as though they are young college students.

Much of the success of the program comes from having the advantage of a long-running middle school ag program, something some districts don’t have.

Erin Butler, who serves as the agriculture teacher at the middle school, said by the time her students get into high school, they can see all the possibilities that are available and often those are life-changing possibilities. With the help of a graduate profile created by Robin, students can get an idea of what their teachers expect from them, and what they can achieve by the time they graduate.

“This graduate profile is invaluable and helps students see the many opportunities they will have in the agriculture industry and they get to see that at the middle school level, which is a real advantage for them,” she said.  “Agriculture is really one of the most important subject areas in life because it affects everyone and even if you don’t major in agriculture you need to be an educated consumer.”

It’s easy to see that the agriculture educators in Harrison County believe in their students, and in doing so, the students believe in themselves. Robin said it’s like opening a door for them and once it has opened they begin to see possibilities and opportunities they didn’t know existed.

“The higher our standards are and the higher our expectations are of these students, the greater their achievement will be and they demonstrated that in many ways, every day,” she said.