Farm Bureau’s informal survey reveals the average cost of a summer cookout for 10 people is $55.07, or $5.51 per person. The cost for the cookout is down slightly (less than 1 percent) from last year. 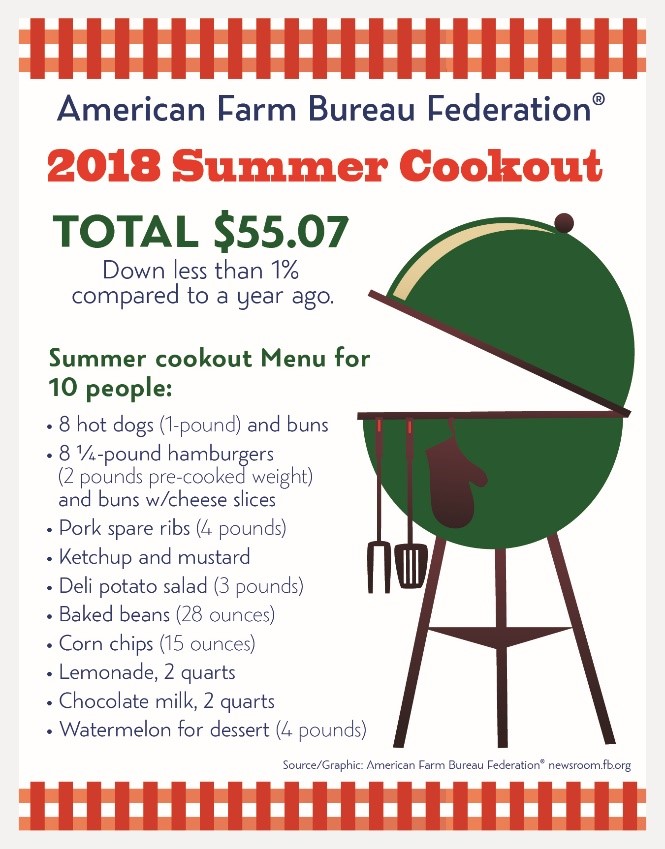 “This is a very tough time for farmers and ranchers due to low prices across the board. It is appropriate that this very painful situation hitting farmers be reflected at the retail level as well,” said AFBF Director of Market Intelligence Dr. John Newton. “We are seeing record meat and dairy production in 2018 so that has also influenced retail prices and so, for consumers, this year’s Fourth of July cookout costs will be slightly less than last year’s.”

Competition in the meat case continues to benefit consumers through lower retail prices, making grilling for July Fourth even more affordable for consumers this year, according to Newton.

A total of 96 Farm Bureau members in 28 states served as “volunteer shoppers,” checking retail prices for summer cookout foods at their local grocery stores for this informal survey.

The year-to-year direction of the marketbasket survey tracks closely with the federal government’s Consumer Price Index report [bls.gov] for food at home as both the index and the marketbasket remained relatively flat compared to year-ago levels.

As retail grocery prices have increased gradually over time, the share of the average food dollar that America’s farm and ranch families receive has dropped.

“Through the mid-1970s, farmers received about one-third of consumer food expenditures for food eaten at home and away from home. Today, farmers receive approximately 14.8 cents of every food marketing dollar, according to the Agriculture Department’s revised Food Dollar Series. However, after accounting for the costs of production, U.S. farmers net 7.8 cents per food dollar.” Newton said.

Using the “food at home and away from home” percentage across-the-board, the farmer’s share of this $55.07 marketbasket would be $8.15.

AFBF is the nation’s largest general farm organization with member families in all 50 states and Puerto Rico. Learn more at http://facebook.com/AmericanFarmBureau [facebook.com] or follow @FarmBureau [twitter.com] on Twitter.