Louisville, KY (August 5, 2014) – He’s the tallest person in the state never recruited to play basketball, has an endless smile and even bigger personality, and, to many, has become one of the most-recognizable icons of the Kentucky State Fair – he’s Freddy Farm Bureau and he’s eager to visit with friends both new and old on opening day, August 14.

For the 57th consecutive year, Freddy Farm Bureau and his 18-foot tall frame will call a stack of hay bales and a white picket fence on the front porch of Freedom Hall his home for the 11 days of the state fair, August 14-24. His extra-large dose of southern charm, denim-based fashion sense, extensive farm knowledge and family-friendly banter is on display from 9am-8pm daily. 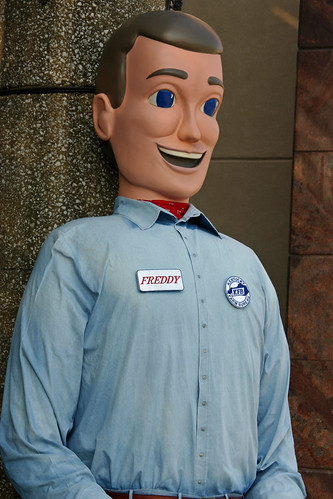 As even the casual passerby can imagine, it takes a big man to handle the duties given to Freddy. While he has always been a huge ambassador for sharing the farmer’s story, over the years Freddy Farm Bureau has also become an unofficial meeting place for many fairgoers. Freddy has talked to and taken pictures with literally tens of thousands of people as they waited by his white picket fence for friends and family to arrive. The good news for Kentucky Farm Bureau’s biggest member is that it seems like he was custom-made for telling the story of agriculture. Neither is Freddy alone in his duties – he represents approximately 475,000 Farm Bureau member families in the state of Kentucky.

Whether fairgoers are visiting Freddy Farm Bureau for the very first time or simply reminiscing about their childhood talks with the big man, they’ll want to save a few minutes of their state fair schedule to see him this year. Those who wish to keep up with Freddy year-round or take in the state fair from a unique point of view can also “Like” Freddy Farm Bureau’s page on Facebook or “Follow” him on Twitter (@FreddyFB).