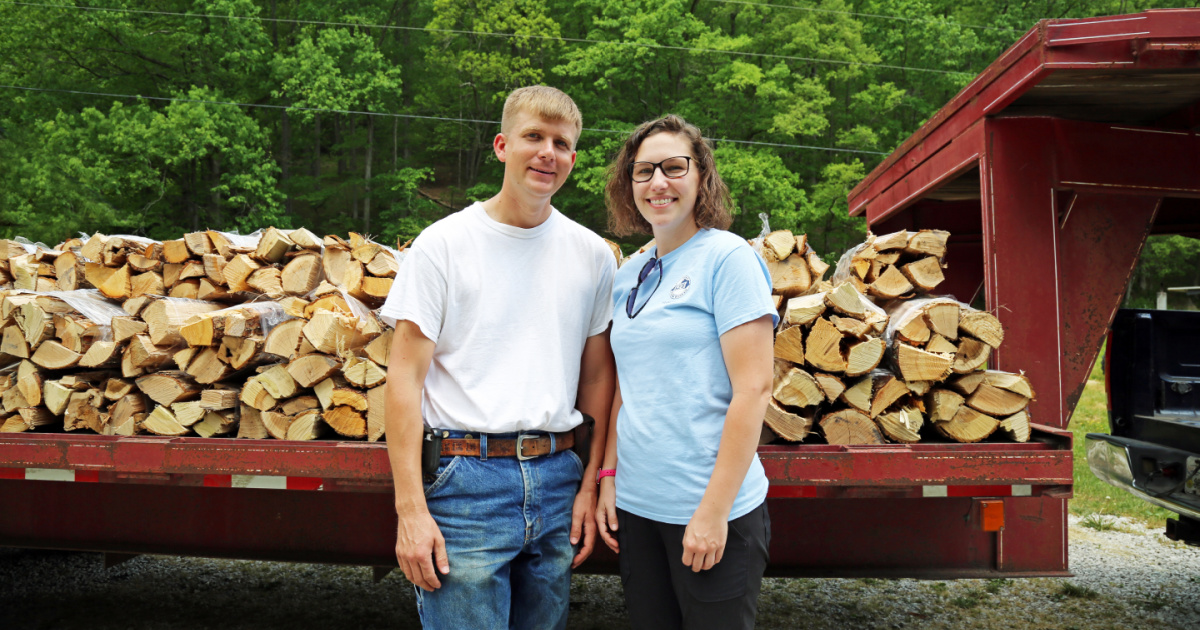 It’s an unusually muggy afternoon in late May as Reed and Heather Graham stand atop the 500 acres in eastern Kentucky they call home. The husband and wife team lean against a trusty white Jeep Cherokee Sport that carried them over steep, rutted dirt roads to summit the knob.

“This is farmland to us,” Reed Graham says as he looks over the lush hillside, which has been in his family since before World War II.

The Grahams are aware that their mountainous property is not often synonymous with the word “farm.” Anyone familiar with Kentucky agriculture knows that the landscape in the eastern region of the state can be a challenge for some farmers. But the Grahams see it as an opportunity.

“Where we’re at in Wolfe County, you have to buy so many acres of actual land just to get a few acres of farmland,” Reed explained. Of the acreage they own, only about 20 percent is used for their cow-calf operation, growing produce, and harvesting hay.

The remaining 80 percent is brimming with a valuable natural resource sought by many in the area: firewood. The Grahams are ideally located within miles of the Red River Gorge Geological Area, a magnet for outdoor enthusiasts drawn to the region for camping, hiking, and rock climbing. This makes their land a perfect match for a profitable firewood operation.

When you hear the words “firewood operation,” you may envision large, desolate sections of land absent of hickory, oak, and maple trees. That’s not the case here. As Reed looks over a tract of land they farmed for firewood in recent years, he bends down to point out oak and maple saplings flourishing on the forest floor.

With the help of multiple National Resources Conservation Service (NRCS) grants, the Grahams operate their firewood business with conservation top of mind, focusing on timber stand and wildlife habitat improvement across their forested acreage.

“We aren’t going out and cutting a nice healthy oak tree just so that we have firewood,” Heather said. “A lot of trees that we cut down are ones that don’t really provide any sort of habitat for the wildlife or a food source.”

In addition, they focus on trees that are already damaged, dead, dying, or downed.

“Honestly, on 500 acres, you could have a big firewood business by never cutting down a single tree if you could just get out all the trees that blow over from windstorms.” Reed said. “It’s hard to get every tree that’s down. The topography here doesn’t necessarily allow that, but we try to get what we can.”

To minimize impact, the Grahams focus on small tracts with small equipment. The largest section they’ve farmed for firewood at one time is five acres. Reed points out a section they worked in 2016. With new growth now pushing 20 feet into the blue sky, the tract is undoubtedly just as healthy – if not healthier – than it originally was.

“We are as low impact as possible.” Reed said. “We do a very good job of not damaging anything else to get out what we want. If it’s going to damage other things, we usually leave it.”

Another great example of the Graham’s resourcefulness is their focus on removing ailing ash trees, which have been heavily impacted by the emerald ash borer in recent years. The insect is a non-native beetle discovered in the U.S. in 2002. It has since killed tens of millions of native ash trees.

“It’s nearly certain that we will soon be without ash trees around here,” Reed explained “The emerald ash borer has been tough on the forest, but we’re using it to our advantage. We’ve spent about three summers now just trying to get to the ash trees before they die.”

Ash trees will start showing stress a few years before they die from a borer infestation. Once the tree dies, they’re dangerous to cut, so that’s why the Reeds have their eyes out now.

“Ash is a great firewood. It is one of the hottest burning woods, it’s easy to split, and honestly, these trees were just going to go to waste if we didn’t get them,” Reed explained.
GROWING BUSINESS ROOTS

The couple’s first contract for firewood came at a time when the emerald ash borer was just on the rise (2009), and as a preventive measure, all firewood used in the Red River Gorge had to be sourced from within the region. The Grahams were asked to provide firewood bundles for sale at Natural Bridge State Park as part of a “burn it where you buy it” campaign.

“That has been key to our growth,” Reed said. “It got us in a bigger setting selling value-added products in a retail outlet for the first time.”

Since then, the pair has seen steady growth each year, allowing them to purchase more sophisticated equipment and streamline their processes.

One of their biggest breaks came just last year, in 2020, when they began supplying bundles to the Natural Bridge Shell gas station in Stanton, Ky., a popular last stop for travelers on their way into the gorge.

Although it’s a hard profession, the Grahams want nothing more than to continue working in nature and look forward to growing their firewood business for the next generation of the Graham family.