Louisville, KY (February 9, 2015) – In half the time it takes a person to earn enough money to cover the cost of taxes in 2015, the average U.S. citizen will bring in the income necessary to pay for the entire year’s food expenses. Kentucky Farm Bureau (KFB) leaders across the state celebrate this fact during “Food Check-Out Week,” February 15-21, and encourage all Kentuckians to take note of the affordability of food in the their hometowns, too. 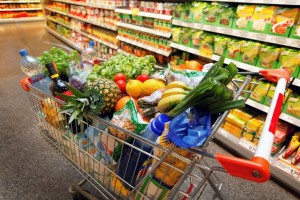 “Most people don’t realize that they have to work significantly longer to pay for federal taxes than they do for food,” noted KFB President Mark Haney. “We use this week to celebrate the fact that the food in this country is the most affordable, most abundant and of the highest quality available anywhere in the world.”

While food prices are not exempt from the nation’s continual economic changes, the cost of food is not nearly as cumbersome as many other expenses an individual must incur – and, thus, where the “Food Check-Out Week” concept is focused.

The average American earns enough to pay for his or her annual food costs by the seventh week of the year. According to research conducted by the Tax Foundation, that same person would have to work an additional seven or eight weeks, or until the middle of April, to earn enough money to pay for annual taxes.

Furthermore, data from the U.S. Department of Agriculture (USDA) estimates that Americans spend just 10 percent of their disposable income on food each year. At the same time, the USDA reports in its Food Dollar Series that a farmer earns less than 16 cents per dollar spent on food.

To celebrate “Food Check-Out Week,” many KFB volunteer leaders in counties across the state are planning informational sessions to greet and educate consumers shopping at local supermarkets. These encounters are designed to not only help inform shoppers about the affordability of the food they regularly enjoy, but to also give them greater knowledge of how to stay on a budget while purchasing healthy food for their families.

“Food Check-Out Week is recognized by our volunteer leaders as an important way to share how Kentucky’s farmers provide so many valuable commodities for our state and nation,” said Betty Farris, chair of KFB’s Women’s Committee. “This is a time we use to educate consumers about where their food comes from and to help them recognize just how affordable it is.”