Each year, Kentucky Farm Bureau recognizes an individual or couple between the ages of 18 and 35 as the Outstanding Young Farm Family (OYFF) of the year.

County Farm Bureaus across the state are encouraged to promote the competition, which recognizes individuals and families who have strong farm management skills, a high level of involvement in Farm Bureau and in their community, and have exhibited consistent financial growth through their farm. Each county winner is then eligible for the district and state competitions. 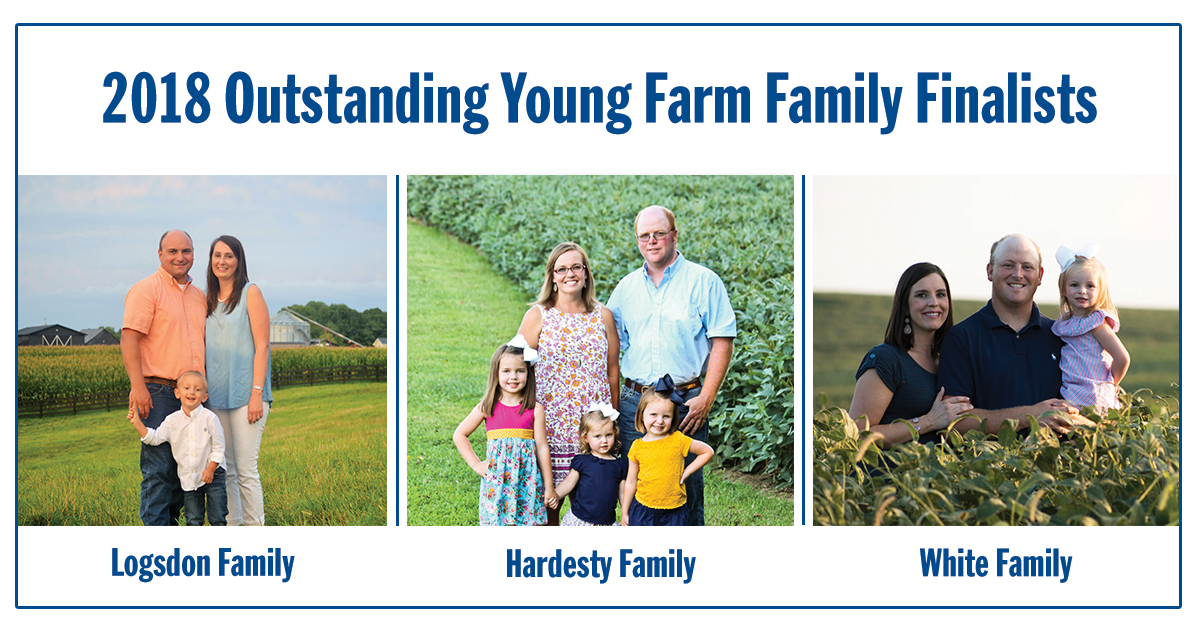 Three finalists have been named for the 2018 Kentucky Farm Bureau OYFF honor, in recognition of their achievements as part of the farming community. This year’s finalists are Nicholas and Bethany Hardesty of Meade County, Wesley and Alicia Logsdon of Pulaski County, and Drew and Liz White of Union County. The winner will be announced at the Kentucky Farm Bureau Annual Meeting at the end of November.

The Hardesty family owns a diversified farming operation in Meade County that includes tobacco, corn, soybeans, hay, and poinsettias. Members of the Meade County Farm Bureau, the couple also raises cattle on a farm they lease.  In addition to their more traditional farming operations, they sell greenhouse supplies to area farmers and retail customers.

Their family’s farming story began in 2000 when Nicholas joined FFA as a freshman in high school. He decided to choose tobacco as his Supervised Agriculture Expertise (SAE) and his career in tobacco production began. After years of hard work, the Hardestys purchased their own land for farming in 2011 and their farming operation has continued to flourish in a multitude of ways.

Today, Nicholas and Bethany both oversee parts of their farming operation. Nicholas manages the typical day-to-day duties including ordering and selling tobacco plants and supplies. Bethany handles all of the paperwork and payroll issues and is responsible for poinsettia production and marketing.

The Hardesty family hopes to complete several projects on their farm in the next 5 years, including obtaining more greenhouses.

Nicholas and Bethany are both involved in their community, including local 4-H and FFA activities. They are also engaged in a number of activities via Farm Bureau at the county, state, and national levels.

The Hardestys have three young daughters and they say that their girls are a main reason they work so hard. They are devoted to their church and believe that their family and Christian values come first.

The Logsdons are a first-generation farm family. Wesley’s love of farming started at a young age when he started showing cattle, and he now has an agricultural operation that incudes tobacco, corn, soybeans, wheat, hay and pumpkins as well.

When Wesley was in 8th grade, his neighbor offered him 50 percent of his calf crop if he agreed to take care of the cattle, fix the fence, and help clean up the farm. That began his farming career in agriculture and he never looked back. He bought his first tractor the year he graduated high school and has worked tirelessly to build his farming operation on his own.

In addition to their daily farm operation in Pulaski County, Wesley and Alicia have an ag-tourism farm they started in 2017. The family rents the farm and run it as a fall festival for hayrides, a pumpkin patch, a corn maze, and more.

While Wesley manages the daily operations at the farm, Alicia, a pharmacist, enjoys helping with social media to help enhance their ag-tourism business and also assists with the paperwork at the farm.  Together, they make taking excellent care of their animals and land a top priority.

A former FFA President, Wesley has been a member of Kentucky Farm Bureau since he was 16 years old. He says he hopes to be more involved in Farm Bureau, as well as in his church.

Wesley and Alicia have a 3-year-old son that they describe as the light of their world. They enjoy family tractor rides at night and also have two dogs and a barn cat.

The White Family of Union County Kentucky has deep roots in farming. Drew has worked and been around his family’s farm for his entire life and still works with many members of his family to operate the farm.  In addition to raising cattle and growing hay and straw, major crops on their family’s farm include corn, soybeans, and wheat.

Drew’s family farming story began during the Great Depression when his great grandfather began farming with his brothers. For four generations, the family farm has grown to what it is today.

Liz is an occupational therapy assistant and also grew up on a family farm. She showed saddlebred horses during her youth and worked at a local farm winery while in high school and college.

The Whites are invested in the future of their family’s farming operation, especially as they continue to grow their family (they have a two-year-old daughter and a baby on the way). They hope to expand their farming operation by renting and purchasing more land and by having the ability to hire more employees.

Drew and Liz have been involved in various community and agriculture leadership roles over the years, including FFA and 4-H. They enjoy spending time on their farm with their young daughter.