Posted on Oct 2, 2014
Washington, D.C. (October 2, 2014) – Shoppers are paying slightly more for food at the grocery store compared to the first half of 2014. Higher retail prices for beef and pork products such as ground chuck and bacon, among other foods, resulted in a slight increase in the American Farm Bureau Federation’s latest Semi-Annual Marketbasket Survey. 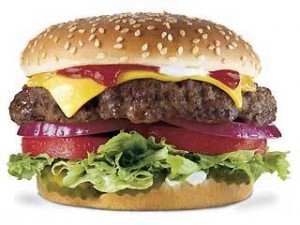 The informal survey shows the total cost of 16 food items that can be used to prepare one or more meals was $54.26, up $1.06 or about 2 percent compared to a survey conducted about a year ago. Of the 16 items surveyed, seven increased and nine decreased in average price.

“Several beef, pork and dairy products rose in price during the second half of the year, accounting for much of the increase in the marketbasket,” said John Anderson, AFBF’s deputy chief economist. “As anticipated, food prices have increased moderately – by about 2 percent – during 2014, which is essentially in line with the average rate of inflation over the past 10 years.”

“On the retail side, we’re seeing higher beef prices which can be attributed to lower production,” Anderson said. “Consumers can expect to pay a little more for their bacon cheeseburgers as we look toward the end of the year.”

The year-to-year direction of the marketbasket survey tracks closely with the federal government’s Consumer Price Index report for food at home. As retail grocery prices have increased gradually over time, the share of the average food dollar that America’s farm and ranch families receive has dropped.

“Through the mid-1970s, farmers received about one-third of consumer retail food expenditures for food eaten at home and away from home, on average. Since then, that figure has decreased steadily and is now about 16 percent, according to the Agriculture Department’s revised Food Dollar Series,” Anderson said.

Using the “food at home and away from home” percentage across-the-board, the farmers’ share of the $54.26 marketbasket is $8.68.

AFBF, the nation’s largest general farm organization, conducted an informal quarterly marketbasket survey of retail food price trends from 1989 to 2012. In 2013, the marketbasket series was updated to include two semi-annual surveys of “everyday” food items, a summer cookout survey and the annual Thanksgiving survey.

According to USDA, Americans spend just under 10 percent of their disposable annual income on food, the lowest average of any country in the world. A total of 87 shoppers in 27 states participated in the latest survey, conducted in September.