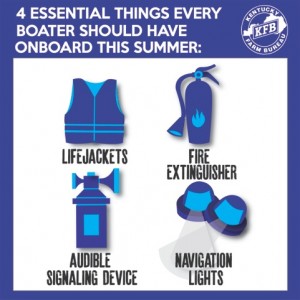 Louisville, KY (July 1, 2015) – As many families prepare to enjoy time on Kentucky’s numerous lakes and rivers for the July Fourth holiday and other summertime getaways, Kentucky Farm Bureau (KFB) urges boaters, swimmers, fishers and skiers to be alert and exercise caution while enjoying their day on the water.

The Bluegrass State, with more than 90,000 miles of lake and river shorelines, is home to more miles of navigable water than any other state in the union except Alaska. With that much water to be enjoyed, Kentucky attracts tens of thousands of people to recreational boating each summer. Such a high volume of water traffic necessitates consistent attention to safety from every boater.

According to the National Safe Boating Council (NSBC), 70% of recreational boating accidents are caused by operator factors. The U.S. Coast Guard supports this fact but also advises that collision with another vessel or object can frequently be avoided by posting a lookout to help navigate around obstacles, knowing and following the nautical rules of navigation and slowing down when in unfamiliar waters or maneuvering in close-quarter situations, such as approaching or leaving a dock.

It is additionally important to remember that operating a boat while under the influence of alcohol or drugs is not only illegal in all states and a violation of federal law, but it is also extremely dangerous. The NSBC says that a boater with a blood alcohol content of .08 (equivalent to a 180-lb. male consuming five beers in one hour) is 10 times more likely to die in a boating accident than a boater with a zero blood alcohol level.

Fortunately for KFB policy-holders, most boating accidents submitted as insurance claims have not resulted in bodily harm (just 0.5%), but it is advisable to recognize that accidents with injuries do happen. Keeping a few simple pieces of equipment on board can help lessen the effect of an accident when and if it occurs:

- State law requires all boats equipped with a petroleum product consuming device (engine, lantern, stove, etc.) to have a handheld fire extinguisher on board.

- Any vessel operating on the water between sunset and sunrise must display proper navigation lights. Sidelights are required on the bow (front) of the boat – red on the port (left), green on the starboard (right) – and an all-around white light in the stern (rear). This helps give boaters an indication of the size and speed of other boats on the water when visibility is limited and indicates if a boat is in a meeting, crossing or overtaking position.

For more boating safety tips and a complete listing of state and federal regulations regarding boat registration, operation, navigation and equipment on Kentucky’s waterways, download the Kentucky Department of Fish and Wildlife Resources’ 2015-16 Fishing and Boating Guide.