There’s something that can be said about tradition when it comes to farming. Danny Cunningham, Kentucky Farm Bureau’s 2018 Farmer of the Year knows all about that kind of tradition. He lives about a half a mile from where he was born and raised, in the small Calloway County community of Penny. There he began his farming experience that continues today. 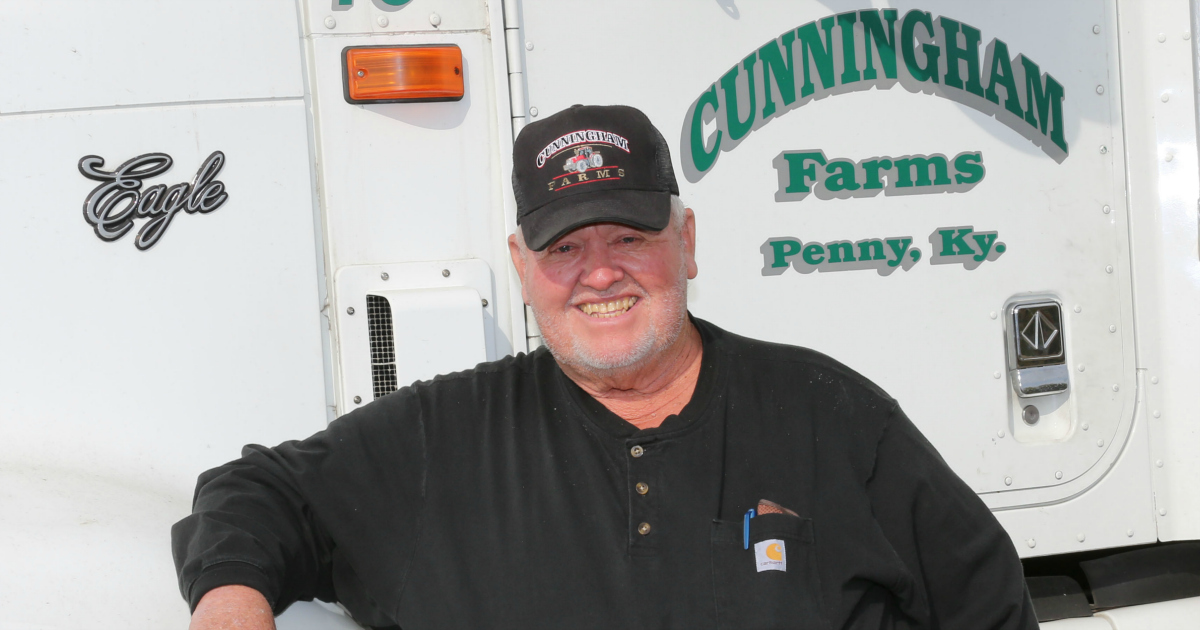 Cunningham is quick to credit his work ethic with having grown up on a dairy farm and smiles a big smile when he tells his age and the fact that he is still farming at 75 years of age.

During that time he has lived through the many ups and downs on the farm and in life itself, including nearly losing his farm in the 1980s during a crisis time in agriculture, and the loss of his wife a couple of years ago.

But Cunningham has stayed the course with the farm and said he learned to cook after his wife passed in order to still have Sunday dinner with his family, every Sunday. Those weekly meals are a tradition for him and his family as is the farm they have grown up on.

His farming operation rebounded to the point that he keeps five employees busy all year now and has supported an H-2A group that has been coming back for nearly two decades to work in his tobacco crop. Because of the strides he has made agriculturally and the support he shows his community, his industry and Farm Bureau, Cunningham was chosen as KFB Farmer of the Year being recognized at the organization’s recent annual meeting.

His modesty comes through saying he was so surprised to hear about being chosen for the honor. “I can’t believe I would win such an award,” he said with a tone of humility.

And while Cunningham may be humble in talking about himself, he is loud and proud when he talks about his family, the people that work on the farm, and an industry he has devoted his life’s work to.

“I bought my great uncle’s farm in 1965 and I’m proud of the ground I’m tending now because, most of it, I’ve had all those years. It has changed hands, but I still tend all the land I started with back then,” he said.

That time in the 1980s when so many farm families faced tough decisions on the farm, Cunningham sold 300 acres of the original farm in order to stay in business. However, he signed a contract the day after the sale with the new owners to rent that same land; a contract that is still in force today.

That decision along with others related to his crops have enabled Cunningham to be successful throughout his career and demonstrate his ability to run the farm as a successful business in the good times and the not-so-good.

Along with his 25 acres of dark tobacco, the main crop on the farm is white corn, as well as soybeans, raising 2,400 and 1,900 acres respectively. Cunningham also grows a smaller crop of wheat, as well.  He sells all his corn to one customer located in Jackson, Tennessee and because he has the grain bin capacity (more than 300,000 bushels) to store all he grows, he trucks corn throughout the winter to the mill.

“I laugh and tell them we store their corn for them, but I have five fulltime employees here and it’s a way to keep them working through the winter,” he said. “I also get a premium for the white corn so that is the only kind we grow. And that’s what’s kept me in business.”

Cunningham has contracted with ADM Milling since 1989 producing 255,000 bushels for them yearly. He also handles his own marketing.

“The basis is already set for white corn making it easier to market but technology has really allowed me to have the market at my fingertips via my cellphone and computer,” he said. “I sell at minimum in 5,000-bushel increments for the corn, soybeans and wheat contracts.”

In addition to the contracts he has, Cunningham also credits the local ethanol plant with being of value to him and other growers who may have overages, saying they generally take that corn at any time.

When speaking in terms of his dark tobacco crop, he noted how labor intensive it is but still somewhat profitable.

“I would say that 80 to 85 percent of the work in our tobacco is still hand labor and we use all
H-2A labor. One of those workers has been with me for 22 years,” he said. “The nine guestworkers we have here on the farm are good people, all family men just trying to make a better living, and send their children to school, just like you and I.”

Cunningham, a lifelong Farm Bureau member has done much to support the industry that feeds his family and so many others, including serving on the Calloway County Farm Bureau Board in many capacities.

“I always tell people that Farm Bureau is the largest organization that helps farmers. They will go to Frankfort or Washington and take up for me and other farmers and that is one of the most important things to me as a farmer. They are also helping get this Farm Bill through, and we need that,” he said.

In addition to its advocacy efforts, Cunningham said he always enjoys the state and national annual meetings.  “My wife and I went to nearly all of them, and I still enjoy them,” he said.

In all the conversations Cunningham has about his farming operation, he always mentions his family, especially his late wife Judy.

“When thinking about my greatest accomplishments I think about being Judy’s husband for 54 years and having three beautiful daughters and being a farmer for 58 years,” he said. “I love that I have been able to raise my family on the farm and want my children and wonderful grandchildren and great-grandchildren to continue this tradition.”

Danny Cunningham really emphasizes how important it is to help young people get involved and says he’s never been ashamed to be called a farmer and never will because the industry is so important to everyone.

“I’m really proud to be picked as the Farmer of the Year. I wasn’t expecting it because I know there are much better farmers out there, but I really appreciate it and I know my wife would have been proud. She was always a big part of this farm.”

Cunningham will now serve as the Kentucky representative in the 2019 Sunbelt Ag Expo’s Farmer of the Year Competition to be held in Moultrie, Georgia next October.