“I have had a close relationship with Extension for most of my life,” Commissioner Comer said. “I got to know about Extension when I was in 4-H. As a farmer, I utilize Extension services in my own operation back home in Monroe County. As a legislator and as ag commissioner, I have always worked with Extension to strengthen Kentucky agriculture. I am deeply honored to receive this award.” 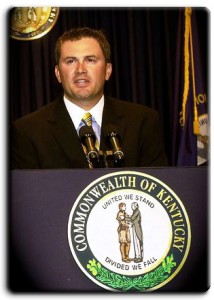 Comer will accept the award at the National Extension Agents Galaxy Conference in Pittsburgh, Pa., in September. He is one of four 2013 National Friend of Extension recipients and the only one of the four who is an elected official.

The Kentucky chapter of Epsilon Sigma Phi, made up of Kentucky county Extension agents, nominated Comer for the award. In its nomination, the chapter cited the following:

·         Comer serves on the Kentucky Agricultural Development Board, the Kentucky State Fair Board, the North American International Livestock Exposition board, and numerous other agriculture-related boards.

·         As a state representative, Comer helped secure funding for a career ladder incentive program for county agents; supported the annual Mammoth Cave Legislative Appreciation Program; was influential in securing $2 million for infrastructure improvements for Kentucky’s four 4-H camps; and played a significant role in starting the “4-H: A Capitol Experience” program that enables 4-H members to visit the state Capitol and meet their legislators.

·         Comer has served on his county Extension council and local cattlemen’s association and assisted with local livestock shows.

“[Comer] has had a tremendous impact on Kentucky agriculture and the Cooperative Extension Service,” the chapter wrote in its nomination.

Based in Twin Falls, Idaho, Epsilon Sigma Phi is dedicated to fostering standards of excellence in the Extension system and developing the Extension profession and professional.