Candid Conversation with the Owners of Oates Promotional Services 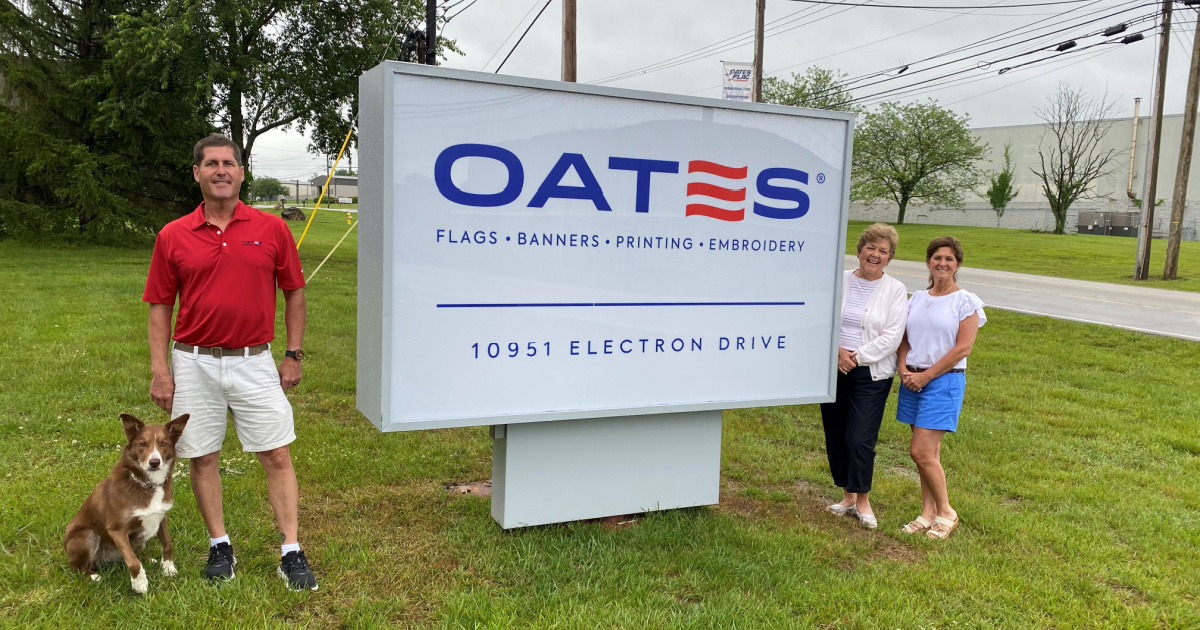 A special edition of KFB Candid Conversation features a discussion with the folks from Oates Promotional Services, a long-time provider of all types of flags including American flags that have flown all over the world.  KFB News recently visited their Louisville facility to talk to family members who are carrying on truly American tradition.

Could you give our readers a little history about the Oates Flag Company?

Oates has been a part of the community since 1945 when C.R. Oates Sr. started the business. He ran Oates Flag until he passed in 1965, when his wife, Tonya, took over the business until 1971.  Randy Oates Jr. and his brother Reggie continued the family business until Randy’s passing and Reggie’s retirement in 2019.  We are still family owned and operated by Randy’s wife Gwynne, Trey and Julie Oates, Leigh Oates McFarland, and our new business manager Greg Strafer.

With such a long history, what do you think has contributed most to your success?

We pride ourselves on being a family owned and operated business and giving personable customer service since 1945.  Four generations of Oates’s have worked here so we know the business inside and out.  Our customers are more than that – they are our friends.  Being diversified has contributed to our longevity as well.  We provide services other than just flags so this has given us the opportunity to expand and grow over the decades.  Screen printing, embroidery and a full-service promotional items are just as big a part of our business as flags and flagpoles.

You note on your website that all your flags are made right here in America. How important is that in this day and age?

Selling American flags made in America is obviously very important to our business.  There are many sites online where you can buy products from overseas but that is not an option for us.    It is a privilege to meet people in the military, police officers and fire fighters daily and they tell us wonderful stories of their service to this country.     When someone drops off a flag to be retired it is because they have reverence for the stars and stripes.

What are some of the other products you make in addition to flags?

Companies come to us not only for flags and flagpoles but also screen printing and embroidery.  We like to think of ourselves as a one stop shop for your branding needs.  That is what has prompted us to rebrand ourselves from Oates Flag to Oates Promotional Services and invest in new equipment to provide a better-quality product.

Are your flags still the mainstay of the company?

Of course, flags are a big part of our company since that is what we were founded on, but we also sell flagpoles and hardware.  We not only carry USA flags, but we carry state flags, military flags, and make custom flags.  We provide flagpole installation and repair flags and flagpoles.  Most people think of only flags when you hear the name Oates, but we like to think of ourselves as a place you can also get anything with your custom logo on it like screen printing, embroidery, and promotional items.

Are there certain times of the year when you get more orders for American Flags?

We have numerous flag holidays that bring people out to freshen up their flags.  We see an increase of interest near Memorial Day to honor those who have fallen.  June 14th is Flag Day which commemorates the adoption of the Stars and Stripes as the official flag of the United States and then July 4th to celebrate Independence Day.  Being in Louisville we also have the Kentucky Derby in May, so we notice people wanting to decorate their homes and businesses with new flags.

You also make historical flags such the Betsy Ross Flag. Do you get a lot of requests for these types of flags?

What is the most unique location you have ever sent an American Flag to?

We have many interesting places that our flags have flown over the years. Recently a Lieutenant Colonel in the Air Force took one of our flags to fly aboard a C-130 aircraft. It participated in the 75th Anniversary of D-Day over the skies of Normandy, France. He presented us with this flag and a certificate that we proudly display in our building.  The same officer flew one of our flags over Afghanistan in 2010 during Operation Enduring Freedom and presented us with the flag back with a certificate and photos.  Lastly, during the Gulf War in 1991 we provided a large “Til They Come Home” flag that was signed by all of our customers to President George H.W. Bush which he acknowledged with a signed letter of appreciation.

To see the June 2021 issue of KFB News in its entirety, please click here.