Posted on May 7, 2013
If everything falls into place, this year’s burley tobacco crop will be the most valuable one since the tobacco program was abolished in 2004.

World burley production fell by around 25 percent last year, creating low stock levels. Companies are now clamoring for the high quality burley common in Kentucky and are expected to pay more for it, according to industry officials.

“Anticipated higher prices and production will likely enable the value of Kentucky’s tobacco crop to exceed $400 million, surpassing last year’s $408 million, which was the highest value since the buyout,” said University of Kentucky tobacco economist Dr. Will Snell. 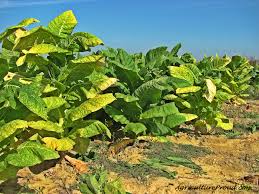 But he and others note that issues beyond weather, plant disease and insects could stifle increased production; most notably the availability of labor and barn space. Another issue has emerged with the USDA’s Risk Management Agency’s unexpected decision to mandate that tobacco will not be insured on any acreage on which tobacco was planted in the two previous years. That announcement, which didn’t come until December, has some growers – especially some large-scale producers --  scrambling to find land.

“It’s caused a lot of problems,” said Spencer County grower Scott Travis, a KFB Director who is chairman of the organization’s Tobacco Advisory Committee. “We have a lot of large growers now and this puts some of them in a tough spot. They either have to find another place to grow or not get insurance – that messes them up with lenders because they require insurance. This caught everyone off guard.”

Besides a supply situation that’s in their favor, growers also could benefit from expanded sales outlets. Last year, a good number of growers became disenchanted with the contracting delivery stations and turned to alternatives such as uncontracted delivery stations, a couple of old-style auction houses or some independent “pop-up” buyers. This competition sent the average price soaring over $2 a pound.

The National Agricultural Statistics Service estimates a $1.97 average for burley last year; the highest price since the buyout. It has estimated 2013 planted burley acreage of 78,000 acres, a five percent hike from 2012.

Snell and others say that’s likely if growers can resolve the labor, barn space and available land issues.

“It’s a supply issue, not a demand issue,” Snell explained. “It’s certainly going to be interesting to see what happens. I think prices will be attractive, but in the long-term I’m not sure. But we are seeing some fields planted for the first time in years. There is opportunity (for a good year).  Certainly short-term optimism.”

“I’ve been on that committee for four years and have never been in one that was that optimistic,” he recalled. “Everyone was pretty upbeat.”

Travis acknowledged that he was among those who bypassed the contract system last year. He said he sold at auction and did well.

“There were plenty of options for growers last year and a lot of tobacco sold well. People were doing better outside of the (contract) system.”

ITTG has added a third station in Warsaw, is contracting with growers and plans to pay top dollar again, Furnish said.

“This is the first time since the buyout that a tobacco farmer can really feel that he has options,” he said. “When the buyout started it was felt that if you didn’t have a contract you could be left out. But now there’s good competition for the big buyers. I think prices will be higher.”

Furnish, however, is not optimistic about a significant hike in production.

“We have an infrastructure problem in this state,” he said. “A lot of the ones who took the buyout have the land and barn space, but aren’t making it available (for tobacco). There’s a lack of labor, good land and barns. Because of the high prices on corn and soybeans, it’s difficult to rent land. With all these factors in play, I don’t see a big upswing.”

Snell concurs with the infrastructure problem. That, plus the volatile world market, have him reluctant to make predictions about the long-term situation.

“To coin a phrase typically used in tobacco, ‘we’re in transition’,” he said.