Bringing the Farm to the City - Kentucky Farm Bureau

Bringing the Farm to the City 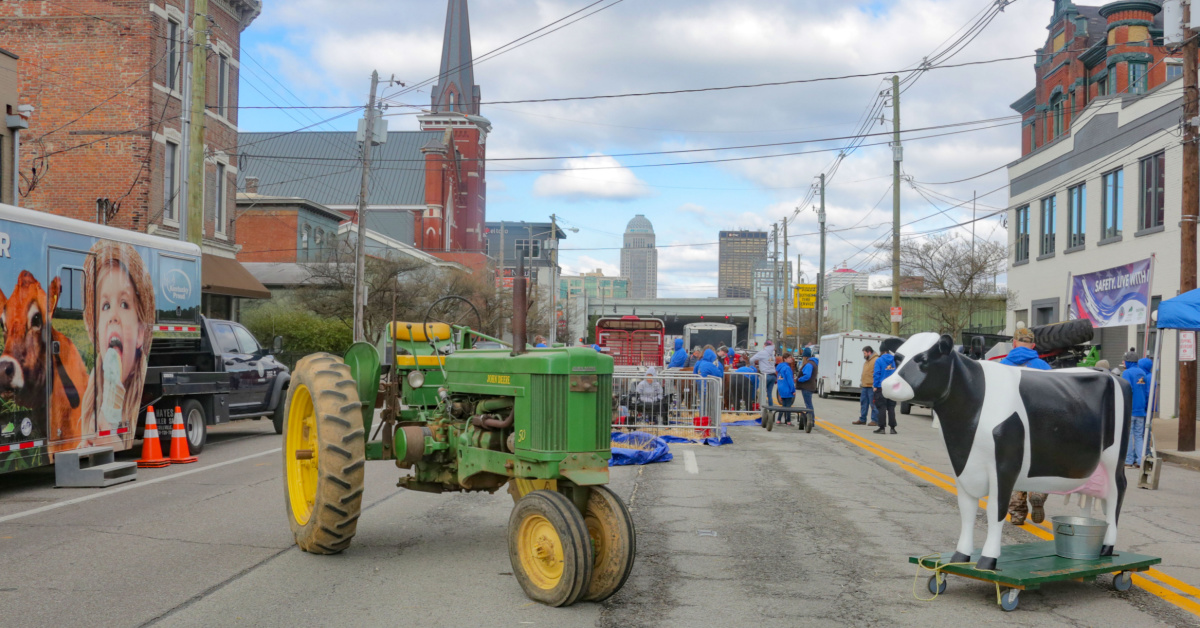 Jefferson County may be home to the state's largest city, but there’s a whole lot of farming taking place there, too.

When searching for information about or images of Jefferson County, Kentucky on the internet, one will likely see photos of the Louisville skyline or statistics about it being the most populated county in the state.

But Jefferson County Farm Bureau (JCFB) volunteer leaders know how important the ag industry is to the local area and are working to bring agriculture to the city in many ways.

JCFB President Bob Williams, and Vice President Calvin Shake, along with their board members, have made it a mission to bring as much information about the farm into one of the largest urban areas in the region.

“Farmland is still pretty prominent in Jefferson County with over 300 active farms here along with roadside markets, quite a bit of cropland, and a lot of beef cattle farmers,” Williams said. “While many people think of events such as the Kentucky Derby when it comes to knowing about Louisville, the agriculture world is still very important to our area.”

All it takes is one trip to the annual NULU Festival held in downtown Louisville to see how active JCFB is in the city.

“We’ve had a presence at NULU for about four years and we just keep adding on to what we bring every year,” Shake said.

The NULU Bock Fest is an annual event that brings local foods, agricultural exhibits, lots of good food, and goat races to the downtown area for all to enjoy.

“It’s a great place to show off our farming industry to folks that have likely never been on a farm,” Williams said. “I think more and more people are discovering local farms and local foods.”

That has especially been true as many people turned to locally produced food and direct-from-the-farm sales during the COVID pandemic.

Shake said there are many farmers' markets in the county that have helped supply this need.

"People in Jefferson County have always been supportive of our farmers' markets, and we saw an upswing in local food interest over the last couple of years," he said. "On our farm, we grow a lot of produce and have had quite a bit of success from our honor system sales we have.”

And while promoting the local farm families is a huge part of what JCFB does, education is at the heart of their activities.

JCFB has also been very supportive of the FFA program at Seneca High which has grown exponentially over the past few years, and they help with elementary school field trips to many of the farms in the county.

But one of the most visible and popular educational endeavors undertaken by JCFB is their book barn program which brings ag-related books to school libraries complete with a wooden version of a barn in which the books are stored.

“We're trying to get a book barn in every elementary school in the county, and there are over a hundred,” Shake said. “We probably have about 30 book barns out, and we’ve got a list of schools wanting them.”

Shake said that list includes about 25 more schools asking for the books.

“We build them, or we have recently had local Amish builders make them, then FFA students paint them,’ he said. And our local Farm Bureau agents and JCFB members have helped deliver the barns.”

Catherine Shake heads up the JCFB Women’s Committee and has directed the book barn program along with other school-related programs.

“We have had so many requests from schools for these book barns, and we have also started an incubator program working with local 4-H and the University of Kentucky Extension," she said.

In addition to the educational programs JCFB is involved with, farm safety is also a major point of focus for the organization.

“We've been teamed up with him for quite some time, and began ordering Turtle Tubes, which we have delivered to all four corners of the county,” Williams said.

Turtle Tubes are a round tube-like contraption that is fitted around a person who has been partially submerged in a grain bin and allows rescuers to safely pull them out and away from danger.

Williams pointed out that there are several types of bins within the county used for grain storage including small micro-breweries utilizing local grains.

“And they have the same problems with those, on a smaller scale, that we see with the big grain bins at the farm,” he said. “But the main issue here is we have first responders who are seven or eight times removed from the farm and are not familiar with the farm or these bins.”

JCFB has made it a priority to get these Turtle Tubes to the local firehouses and emphasize the importance of these first responders getting the proper training for farm rescues.

“The response has been very positive and nearly all the firehouses have signed on to get the training available to know how to use the equipment and how to respond to these types of emergencies,” Shake said.

Williams said, at the end of the day, they want to make a difference in their communities whether it's teaching consumers about local foods, helping students understand where their food comes from, or giving the proper tools to first responders to help save lives.