Posted on Oct 15, 2014
Louisville, KY (October 15, 2014) – According to the Kentucky Farm Bureau (KFB) Federation’s latest Marketbasket Survey, the rising cost of beef and pork products at supermarkets across the state led to an overall 3.9 percent jump in retail food prices during the third quarter of the year. The survey, conducted in September 2014, identified the total cost of 40 basic grocery items as $127.00, compared to $122.23 in the previous quarter. 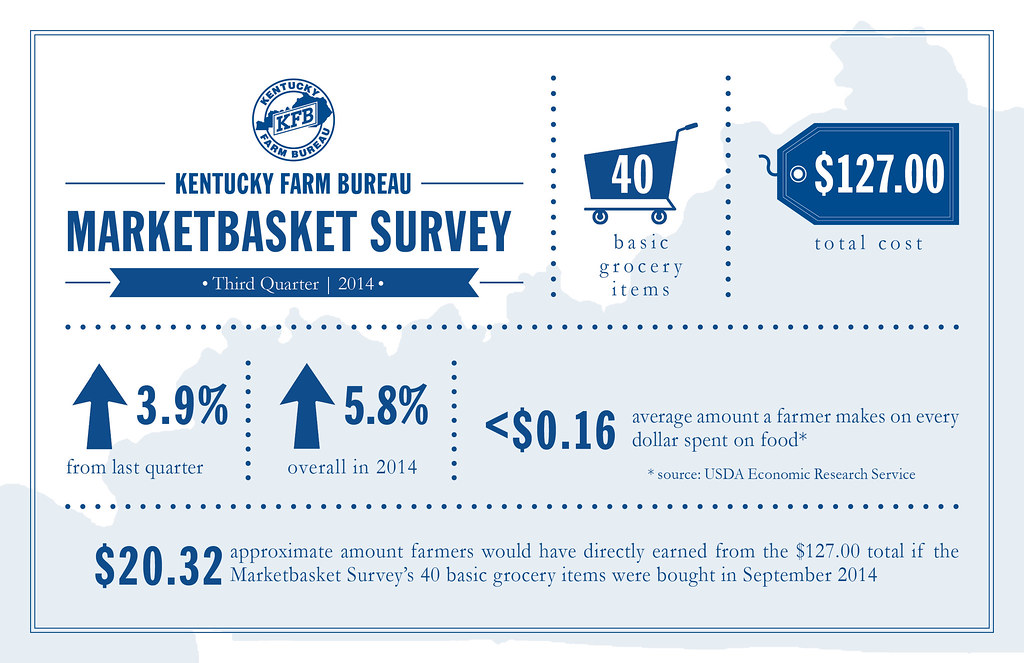 September’s Marketbasket Survey total was $4.77, or 3.9 percent, higher than the cost for the same list of items reported in the second quarter, and the fifth consecutive quarter with an increasing price total. These latest results also show Kentucky’s grocery prices rising by 5.8 percent overall in 2014, moving from $120.08 at the end of 2013 to $127.00 today. This price shift outpaces the overall 2.5 to 3.5 percent increase in food cost that the United States Department of Agriculture (USDA) forecasted for the year.

At the same time, national trends reported in the U.S. Bureau of Labor Statistics’ Consumer Price Index (CPI) reveal that its food-at-home prices have also risen steadily all year. The USDA’s Economic Research Service (ERS) points out that while it does anticipate food prices to return to normal inflation rates by the end of the year, the CPI’s food-at-home prices increased more in the first six months of 2014 than they did in all of 2013. Current CPI data reports prices for food-at-home increasing nationally by a total of 2.9 percent during the last 12 months.

Of the six food groups recorded in the most recent survey – beef, pork, poultry, dairy, grains, and fruits and vegetables – the beef category showed the largest total gain with an average price jump of 10.1 percent (+$3.38). Pork was not far behind with an average increase of 6.1 percent (+$1.21). This is also the third consecutive quarter in which beef and pork prices have climbed, and both categories are at all-time highs in the Marketbasket Survey’s history. Overall, 22 of the 40 items recorded in this survey experienced increases in average price during the third quarter.

When compared to the previous quarter, the only food group categories to experience reductions in average cost were poultry (-$0.29, or -2.9 percent) and fruits and vegetables (-$0.44, or -2.2 percent).

The Marketbasket Survey’s top three average price increases reported for items in the third quarter of 2014 were:

The source of Kentucky’s recent surge beef and pork prices can quickly be traced back to national trends. ERS reports show that national beef prices are up 15.1 percent year-over-year as the U.S. cattle herd size reached its lowest level since 1951. Similarly, pork prices were reported up 11.7 percent from a year ago due as well to smaller herd sizes and higher pork import costs from producers in Europe.