An (almost) comprehensive glossary of baseball jargon with agricultural roots 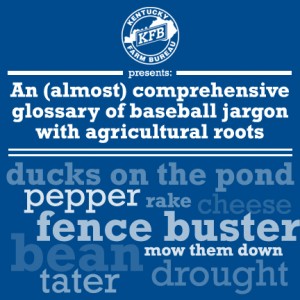 As the summer sun continues to hang high and extend the daylight hours needed for a farmer’s workday, the other “boys of summer” are also at it full tilt – and talking like farmers while they do it. Take a look at Kentucky Farm Bureau’s (almost) comprehensive glossary of baseball terminology that originated from – or at least sounds like it is connected to – the farm.

Bean -- when the batter is hit by a pitch

Bread and butter -- a player's greatest or most reliable skill

Can of corn -- an easy catch by a fielder

Drought -- a long string of at-bats, innings or games in which a player or team fails to perform up to expectation

Ducks on the pond -- runners on second or third base, but especially bases loaded

Farm team -- a team or club whose role it is to provide experience and training for young players, with an expectation that successful players will move to the big leagues at some point. Each Major League Baseball team's organization has a farm system of affiliated farm teams at different minor league baseball levels.

Fielder's choice -- the act of a fielder, upon fielding a batted ball, choosing to try to put out a baserunner and allow the batter-runner to advance to first base. Despite reaching first base safely after hitting the ball, the batter is not credited with a hit but would be charged with an at-bat.

Get on one's horse -- when a fielder (usually an outfielder) runs extremely fast towards a hard hit ball in an effort to catch it.

Goose egg -- a zero on the scoreboard

Meat -- an easy out or a rookie

Meat of the order -- refers to the 3, 4, 5 and sometimes 6 hitters in the lineup. Since it is the middle of the order and usually the strongest hitters

Mow them down -- a pitcher who dominates the opposing hitters, allowing few if any to get on base, is said to have "mowed them down"

Mustard -- a high amount of velocity on a throw or pitch

Pea -- a ball traveling at high speed, either batted or thrown

Pepper -- a common pre-game exercise where one player bunts brisk grounders and line drives to a group of fielders who are standing about 20 feet away. The fielders try to throw it back as quickly as possible. The batter hits the return throw.

Pickle -- when a runner is caught between two bases

Rake -- to really hit the ball hard, all over the park; when you're raking, you're hitting very well

Rhubarb -- a fight or scuffle

Timber (or lumber) -- a baseball bat

Went fishing -- when a batter reaches across the plate trying to hit an outside pitch, perhaps one that he can't reach

Worm killer -- a pitch, usually an off speed or breaking ball, that hits the ground before it reaches home plate, thus theoretically killing worms