A New View of Washington D.C.

Last week, my family and I made the trek to Washington, D.C. with 207 other dedicated Kentucky Farm Bureau members for the annual Congressional Tour. As a member of the 2015–2016 LEAD program, I was invited to represent district 2 as we spoke to our congressional delegates and made sure that they understood our position on many different legislative issues. This was my first opportunity to visit to Washington D.C. and I was extremely excited to see KFB in action on the political scene. 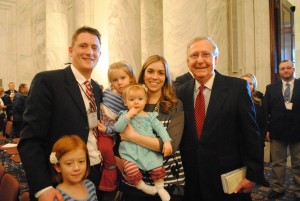 My first taste of the resilience of the Federation leadership and staff came on the night before our flight to D.C., when our flight was cancelled. The staff worked tirelessly through the night to reschedule our flight, which contained 76 of the 213 people on the tour. The first day my family arrived, we participated in a bus tour of the city. We visited the Lincoln Memorial, Jefferson Memorial, Vietnam War Memorial, Korean War Memorial, Washington Monument, Capitol Building and the White House. Each landmark we toured marked an important person or event from our nation’s past, which brought forth a great sense of humility within me. It reminded me of the responsibility I have as an American to be involved in the progress and defense of our great nation. I’m not a politician and I really don’t like politics, however standing up for what we believe and defending our livelihood is necessary in this ever-changing world.

In politics, if you desire a whole lot of action, you’re going to need to do a whole lot of talking. The following day, our group met with the American Farm Bureau’s executive director of public policy Dale Moore and several other staff members as they briefed us on important issues which would be voted on during the 114th Congressional session. They informed us of the AFB’s position on these issues and encouraged us to bring them up with our congressmen. They also asked for input from the audience on additional issues we were facing at home in Kentucky. I quickly realized how hard the American Farm Bureau works and advocates for farming families and the protection of their trade. The AFB lobbies for our interests on a national level, so that we can provide and produce at home. 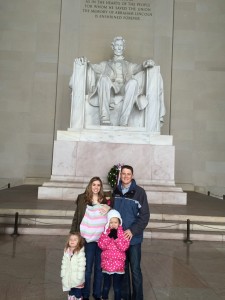 After hours of preparation, many miles traveled and a whole lot of talking about what we needed to do…it was go time. On the morning of February 24th, our political prowess was in full swing as we had breakfast with representatives and congressmen from across the state of Kentucky. Bob Stallman, president of the American Farm Bureau, kicked off the breakfast before we were addressed by each of our senators and representatives. Mr. Stallman told the audience that KFB did a better job than any other state at getting the support of its congressman, which really stuck with me. Once all of the congressmen spoke, each district met with their local officials and discussed our position on issues like the Clean Water Act, the Migratory Bird Treaty, Farm Labor Programs, Global Trade Agreements, Estate Taxes and Small Business Depreciation.

Following breakfast, we reconvened atop Capitol Hill where we shot a group photo and walked inside for a private Q&A session with senators Mitch McConnell and Rand Paul. Each of them spoke candidly as they addressed pointed questions and comments from the audience. Later that night, my family met at Congressman Guthrie’s office before he went to the House floor and cast his votes. Earlier that morning at breakfast he mentioned to our district that he would gladly take any children under 12 down on the House floor that night. This was one of the highlights of our trip! My 2 oldest daughters, Abbey (6) and Brenna (3) went with Madison Bush (11) down on the House of Representatives floor to vote with Mr. Guthrie. The girls followed him like puppy dogs and he took them down front and got them on CSPAN. They were able to hold the gavel and were introduced to representatives from all over the country. This was a once in a lifetime experience that my girls will never forget! I’m so grateful to Mr. Guthrie and KFB for making that experience possible.

As an agent for Kentucky Farm Bureau Insurance, I was well aware that the KFB Federation was very involved with the political interests of our members, but I never realized the weight we carried on a national level. When it comes to agriculture, Farm Bureau is a 500lb gorilla standing in the middle of the ring, which is a force to be reckoned with. I was blown away at the high level of organization demonstrated at this event and the respect shown to KFB by our elected officials. They realize how large our organization is and their need for our support.

The character of an organization is revealed during times of stress and when things don’t go as planned. The fact that 213 people made it to Washington for this tour through terrible weather conditions, icy runways and cancelled flights shows commitment and character on the part of both staff and attendees. I brought my wife Becca, along with our 1, 3 & 6 year old and I can’t tell you how many times individuals offered to help us going from place to place, carry sleeping children or get bags to our room. When our flights got rescheduled, the airline initially booked my family to fly into D.C. on different days and almost every member of my LEAD class offered to trade tickets so that we could fly together as a family. I feel blessed to be associated with a group like this and look forward to the remainder of our time together.

Although the air in Washington, D.C. may be hotter than any other place in the United States, we must be part of it. Not participating in democracy is participating in democracy. Laying our guard down allows others to regulate the things we do on a daily basis, which makes supporting our families that much harder. I’m grateful for the KFB and the AFBF and the role they play in Washington, so that I can focus on my job. So, if you have an appreciation for agriculture and you’re not a member, you should join today.

*Scott Bouldin is a 2015-2016 LEAD participant. He is also a Kentucky Farm Bureau Insurance Agent in Warren County. He and his wife have 3 daughters.