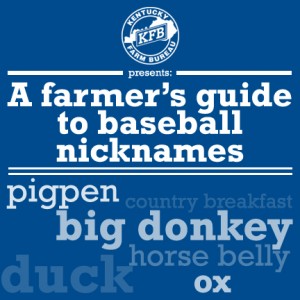 Nicknames in the sporting world are no new thing, but did you ever stop to think about how many of those nicknames have agricultural ties? A long look at the history of baseball and its players says quite a few. Whether you were tagged for your size, style of play or simply because a new moniker played well (or humorously) with your real name, nicknames have defined these athletes since the late 1800s.

Here, in alphabetical order by nickname, is a near-exhaustive list of the many different baseball players with ag-related nicknames from the past century or more…