A Dry Mississippi: What Low River Levels May Mean to Farmers, as Well as Consumers - Kentucky Farm Bureau

A Dry Mississippi: What Low River Levels May Mean to Farmers, as Well as Consumers 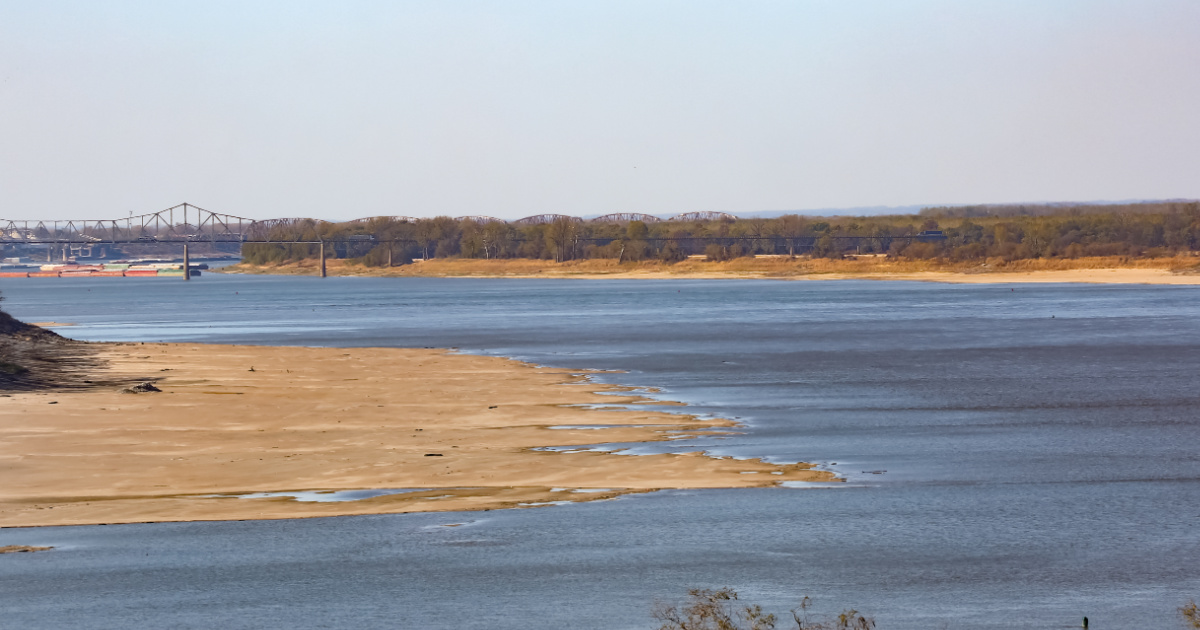 It has been called many things throughout the ages; "Father of Rivers," the "Great River, "and the "Mighty Mississippi," to name a few. But industries of all sectors, especially agriculture, have come to know the Mississippi River as one of the main transportation modes for goods going out and coming into this country.

And while the value of the river as a major transportation "highway" cannot be overstated, the ongoing drought that has plagued this part of the country had brought the river down to historically low levels, at one point, hampering barge traffic at best, and in some places, stopping it altogether.

From a weather perspective

Dr. Jerald Brotzge, Kentucky State Climatologist and Director, Kentucky Climate Center and Kentucky Mesonet, said the current drought across the Mississippi River Basin is in many ways the most severe since the Midwest drought of 1988.

"Some points along the Mississippi River are seeing record low levels, and while the comparison of certain points is a bit like comparing apples-to-oranges due to changes in river structure, this is a severe drought on par with that seen in 1988," he said. "These record low river levels are having a considerable impact on barge traffic, much like what we saw in 1988. Unfortunately, (that drought) extended into 1990."

The winter outlook however is calling for more normal temperatures and precipitation for this area, and any precipitation will help the situation.

"The winter (December, January, February) National Oceanic and Atmospheric Administration (NOAA) outlook predicts a continuation of La Niña conditions, which means equal chances for temperature and precipitation anomalies for most of Kentucky with some chance for above-normal precipitation across northern Kentucky," Brotzge said.

For those farm families depending on the river to move this year's harvest out and needed inputs in, the winter projections couldn't come soon enough.

The problem for farmers

Glenn Howell, a lifelong resident of and farmer from Fulton County, which borders the river, said he has likely never seen it this low before.

"I've lived here all of my life and have seen this river during flood states and drought, but I don’t remember it being this low since 1988," he said.

Howell, who serves on the Kentucky Soybean Promotion Board and as a Kentucky Farm Bureau state director, said many grain facilities have stopped taking in grain because the river has been too low to move fully loaded barges out.

"There are a lot of farmers in this area who do not have enough on-farm storage to handle all the grain they produce, and they have basically shut down and stopped harvesting until these granaries can fully load these barges again," he said.

Often, producers contract with specific grain facilities so they are "locked in" to deliver to those specific places during harvest.

“We have had some rain which has brought the river up by a couple of feet, but if this drought continues, we may see some of these facilities shut down again,” Howell said.

Some granaries are filling barges at half capacity because of the low water levels but the traffic on many parts of the river is down to "one lane," if at all. The Army Corps of Engineers has been dredging the river to keep channels open as much as possible, but many producers across the state have been affected by the slow movement along the Mississippi.

Late November rains have helped alleviate some of the problems, but the river is still far from a normal level in many areas.

More than just an agriculture issue

"The Mississippi is critically important in moving U.S. grain both here domestically, but when you look at exports, about 47 percent of all grain destined for export markets move on the Mississippi River waterway," he said. "It's also one of the most environmentally friendly and economical ways to move bulk commodities."

Walmsley pointed out that in looking at the broader supply chain challenges that currently exist, few other modes can handle bulk grain outside of the waterway.

"The other is rail, which is ripe with uncertainty right now, both on service issues and then the uncertainty around the labor negotiations," he said.

The threat of a rail strike was looming and causing great concern, especially when the railway systems could serve as an additional way to move agricultural commodities at a very critical time of the year. Negotiations had been ongoing between railroad labor unions and federal officials trying to avoid a shutdown but eventually, Congress had to step in, passing legislation to keep it from happening.

While farm families are facing many uncertainties due to the collage of issues they face in marketing their crops, consumers are also facing difficulties as many inputs, especially related to energy use, come via the Mississippi waterway.

“These transportation challenges will continue to contribute to the high inflationary pressures that (consumers) feel every time they go to the grocery store," Walmsley said. "In the longer term, if we continue to have these transportation snarls, you could see availability issues. As we go into winter, there are concerns about heating oil in certain parts of the country. Coal might be able to be shifted some by rail, but again, you have those issues. But even (with) road salt, you could see issues since a lot of the supply comes in by way of the Mississippi."

Investing for the future

Jonathan Reynolds farms with his grandfather in Clinton, Ky., which is located about 15 miles from the river. He understands the importance of this critical transportation mode as well as on-farm storage, both of which play a major role in how farmers will market their grain.

"The river for us plays a huge role in how we can market, especially from a timing perspective. And we are fortunate, in that we've got enough storage, especially in a drought year, to hold everything we have produced," he said. "But many of the farms in this area don't have enough storage facilities, leaving them with fewer options in a year like this one."

A couple of those options include finding grain storage to rent from farms that have bins available or hauling grain straight from the field to granaries that may still be taking in product but doing so at reduced prices due to transportation, and supply and demand issues.

As Kentucky's grain production has increased sizably over the past several years, many producers have invested in on-farm grain storage not only for their use but for other farms, as well.

"We've had the kind of year that will likely make more farmers think about the investment in greater on-farm storage," Reynolds said. "In looking at the long-term benefits, we have one bin that went up in 1971, and while we have had to do maintenance on it, we've tied it into the rest of our system, so it's been a good investment."

When a more normal level in the Mississippi River will return is in the hands of Mother Nature. Some late fall rains have raised the level some, but much of the state, including the Mississippi River counties, remains in severe drought, according to the latest information listed on the U.S. Drought Monitor’s website.

So, without adequate rainfall in these areas, it may be some time before the Mighty Mississippi lives up to its name once more.