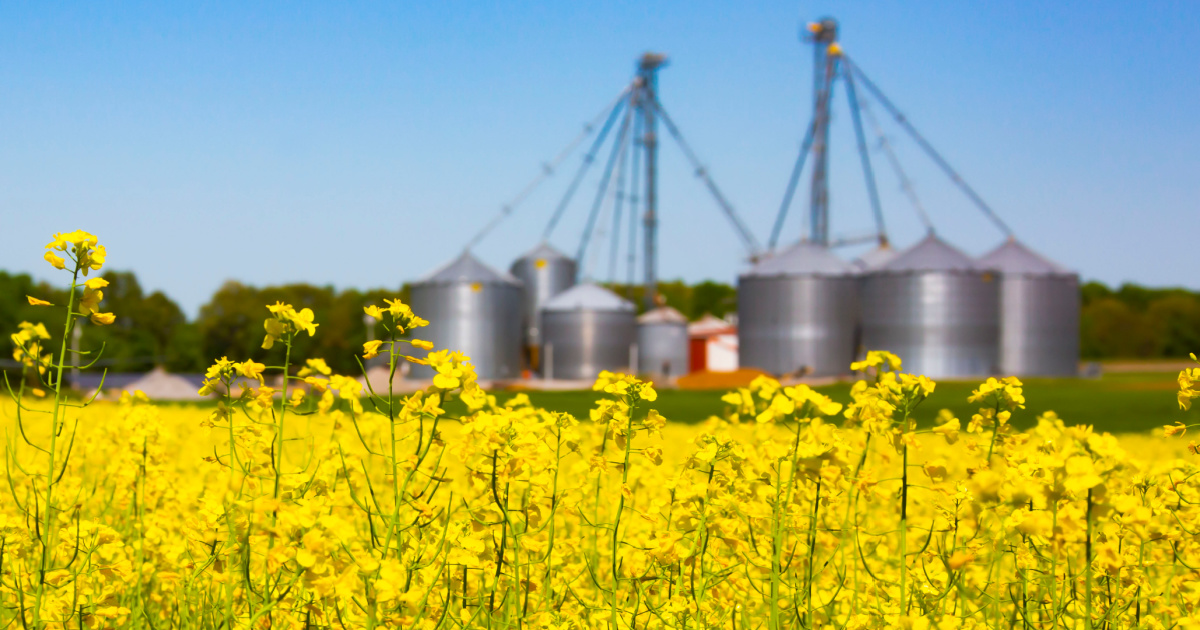 Of all the crops grown in Kentucky, perhaps some of the most colorful and picturesque are canola and its very close cousin, rapeseed. The glow from the yellow flowers, which bloom atop these plants in the spring, almost seem electrified in the bright late April sun.

Tripp and Sharon Furches of Furches Farms in Calloway County know well the beauty of this particular crop. They have been growing canola and its close cousin, rapeseed, for the past five years and have found it to be not only beautiful to the eye but advantageous to their crop rotation.

“We started growing canola in 2016 and now produce rapeseed, which is almost identical with some slight genetic differences,” Tripp Furches said. “But I consider the rapeseed to be a mellow crop and the best one I have found to double-crop with soybeans.”

Many soybean producers in the state grow “double-crop beans,” meaning they seed soybeans immediately after harvesting a crop such as rapeseed. Wheat and soybeans are often used for double cropping, but the Furcheses have also found rapeseed to work well with soybeans for a number of reasons.

“It’s harvested just a few days earlier than wheat, and it’s really easy to plant soybeans into that residue,” he said. “And it’s a good product for the soil.”

Furches Farms contracts with Perdue AgriBusiness for their rapeseed crop. Jeff Riddle, who is a grower relations manager with the company, said rapeseed has a history dating back to biblical times.

“Samples of rapeseed oil have been traced back to the times of the Bible, but the crop that people are probably more familiar with is canola, which is a variety of rapeseed bred down to make it more suitable for food applications,” he said. “The rapeseed crop we are dealing with is known as High Erucic Acid Rapeseed, or HEAR, which is typically used more for industrial purposes, but it does have some food applications as well.”

Because HEAR is classified as a specialty crop, Riddle said growers can often get a premium for raising it.

“The benefit in being a specialty crop instead of a commodity – which is what canola is – growers receive somewhat of a premium to grow it,” he said. “And we try and pay as best a premium as we can, as compared to the main crop we compete with, which is winter wheat.”

Rapeseed also has many agricultural advantages, according to Riddle.

“The typical plant dates run from early September to no later than early October, and harvest takes place in the late spring, usually a couple of days earlier than wheat,” he said. “This allows producers to get their soybean crop out a little earlier. It’s also a broadleaf crop versus a wheat grass crop, so you’re sort of switching up your rotation a little bit, and with that, it helps reduce your pest and disease cycles. It has a nice taproot (main root) on it, so it makes it a drought tolerant crop. And because of that big taproot system, it helps improve your soil tilth or your physical condition of the soil.”

And of course, the most noticeable state of growth is the flowering stage when the bright yellow blooms blanket the crop. Those flowers usually last until the first of May before the plant begins its next cycle, which leads to harvest usually in late May or early June.

Tripp Furches said as wheat prices have risen of late, it’s hard to estimate if the rapeseed crop is more cost effective, but the benefits of having it as part of his rotation are enough to continue producing it.

“It’s just a good crop and is beneficial to the soil,” he said. “And so far, we have never had a failed crop. We still grow winter wheat, but rapeseed is something we think we’ll keep on the farm.”

Sharon Furches said in addition to its agricultural benefits, the crop has been an attention-getter for community members.

“A lot of people ask questions about the crop and often ask if they can take photos in front of it,” she said. “I have found this gives us an opportunity to talk to them about not only the rapeseed but agriculture in general. We even have a local beekeeper who brings hives to the farm when the crop is in bloom. He said the pollen from the flowers makes for great honey.”

Riddle said the Perdue AgriBusiness rapeseed program continues to grow, and the markets are good for the oil the company produces with it. Plus, neighbors to the Furches Farm likely want to continue to see the crop’s beauty when springtime rolls around. All in all, a win-win.

For those interested in growing and contracting rapeseed you can contact Jeff Riddle with Perdue at (336) 558-3711 or jeff.riddle@perdue.com.